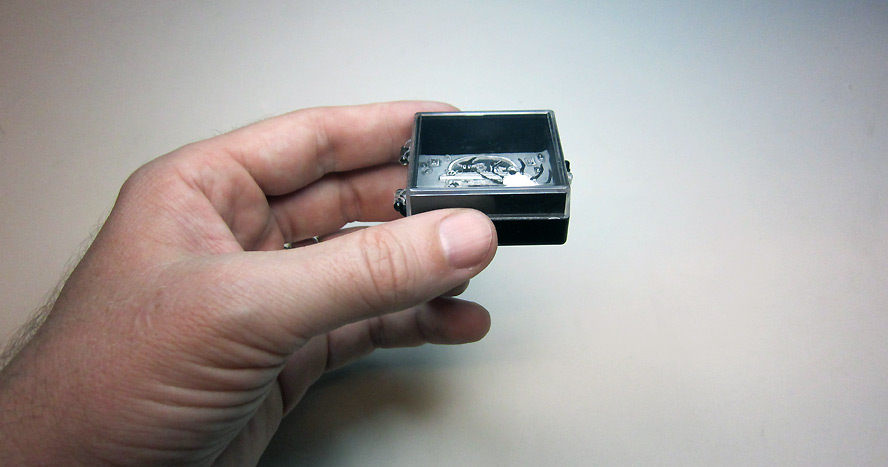 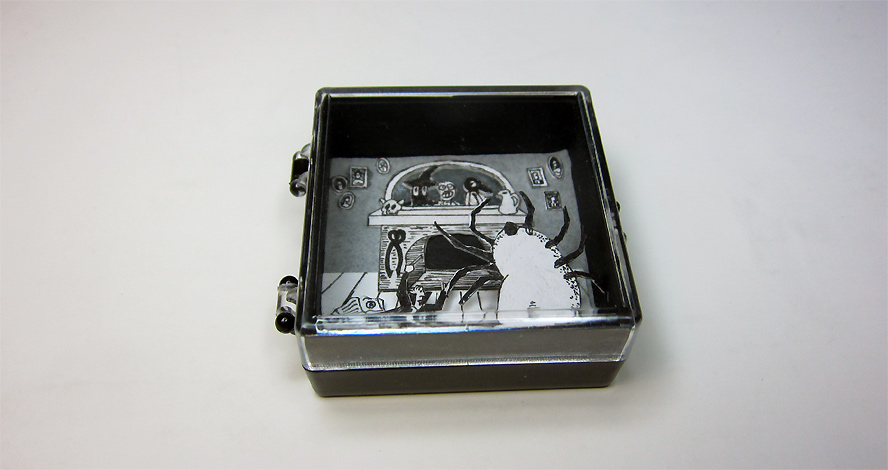 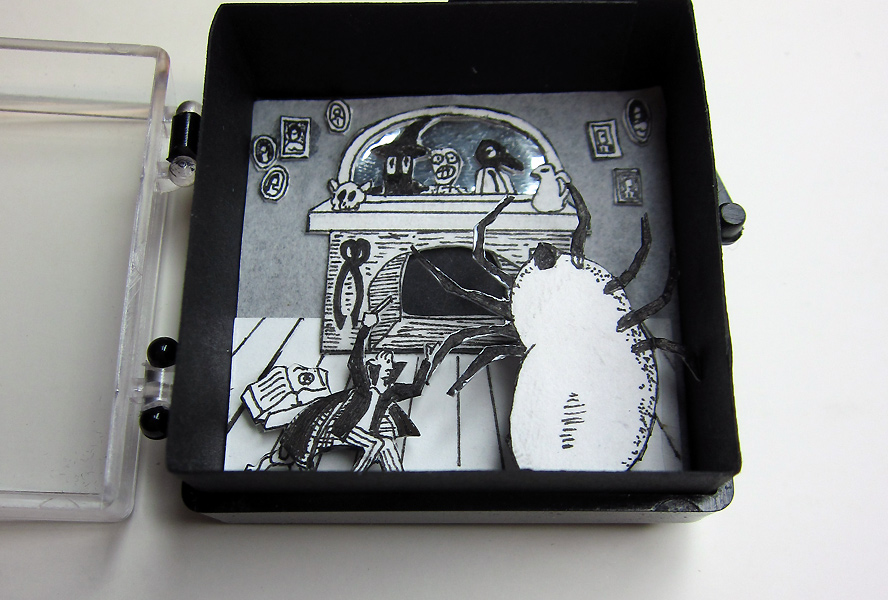 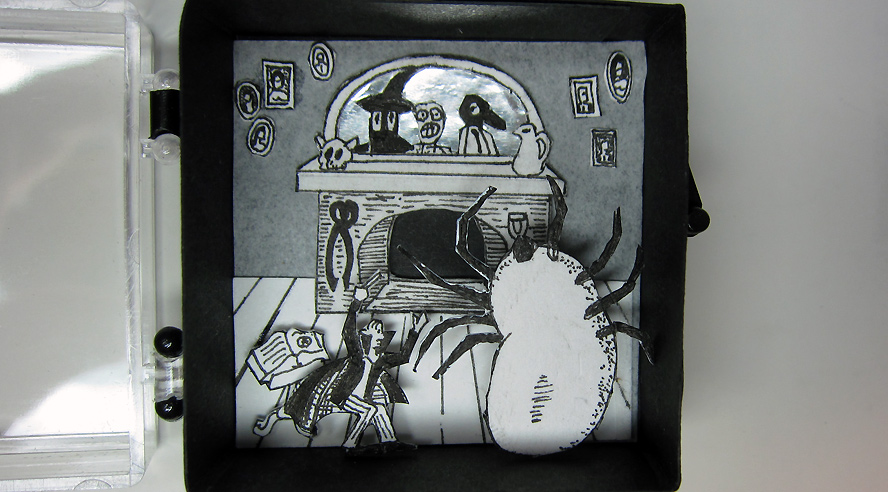 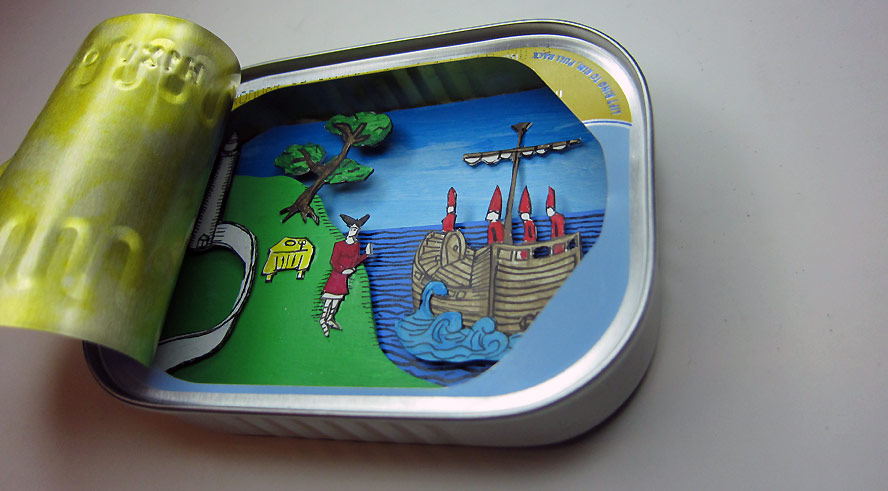 Here’s a color test for a group of bigger pieces I’m making. It’s really just a quick sketch of a diorama – I achieved a pretty nice fade in the sky. It’s nice to have something new to post something (even a sketch), as I’ve happily been sharing roller derby stuff lately. Yet, I have been busy working on new things for an upcoming show.

I’ve been thinking about magic lately. This piece relates to the subject, and starts what I expect will be a lengthy, summer long discussion. There’s a ship full of bishops attempting to land on an island, and the lighthouse keeper is warning them of a particular treachery.

Life is good and full of magic. I’m very grateful. 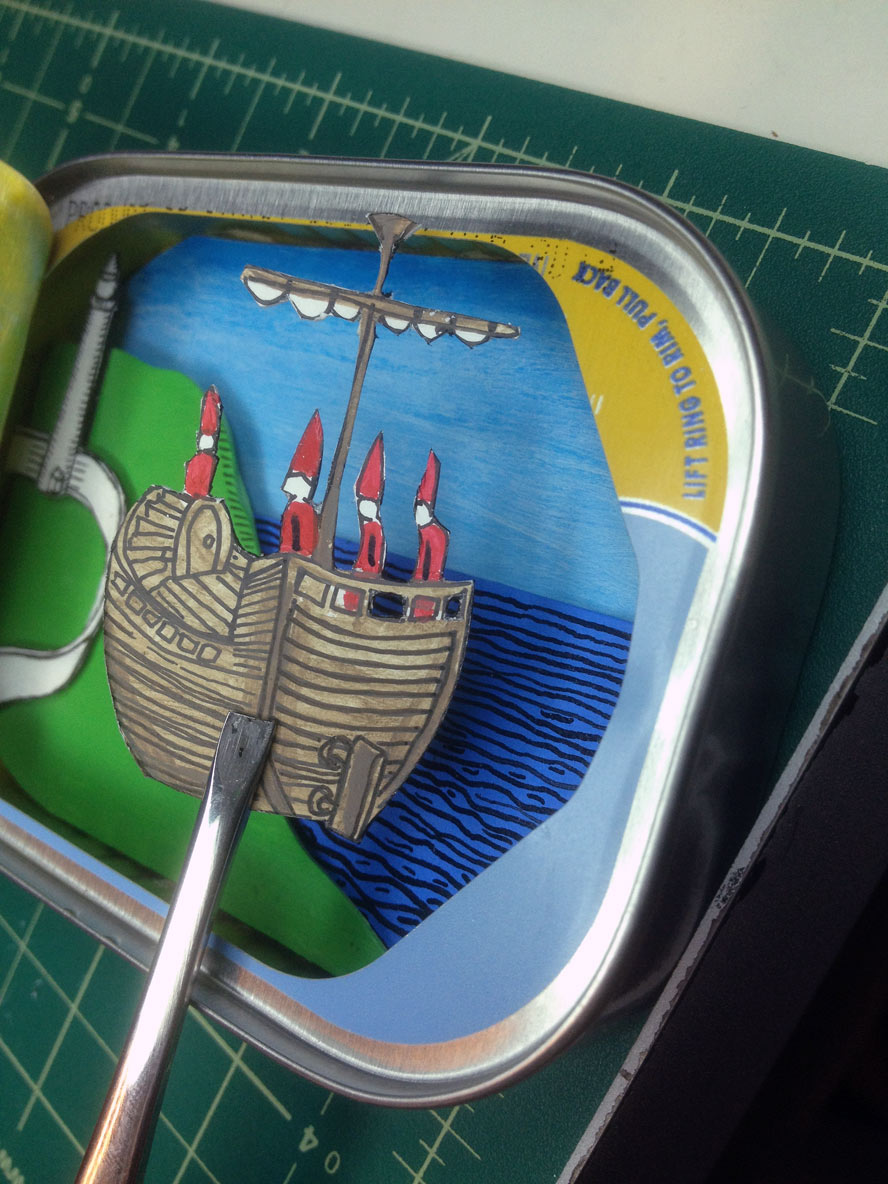 I whipped this up for School33’s Lotta Art fundraiser on April 21, 2012. It’s another pen and ink drawing on canvas and hangs inside a box. I’ve been hankering to work on canvas lately and this is a warm up for a bigger piece. It’s 2.5′ x 1′. 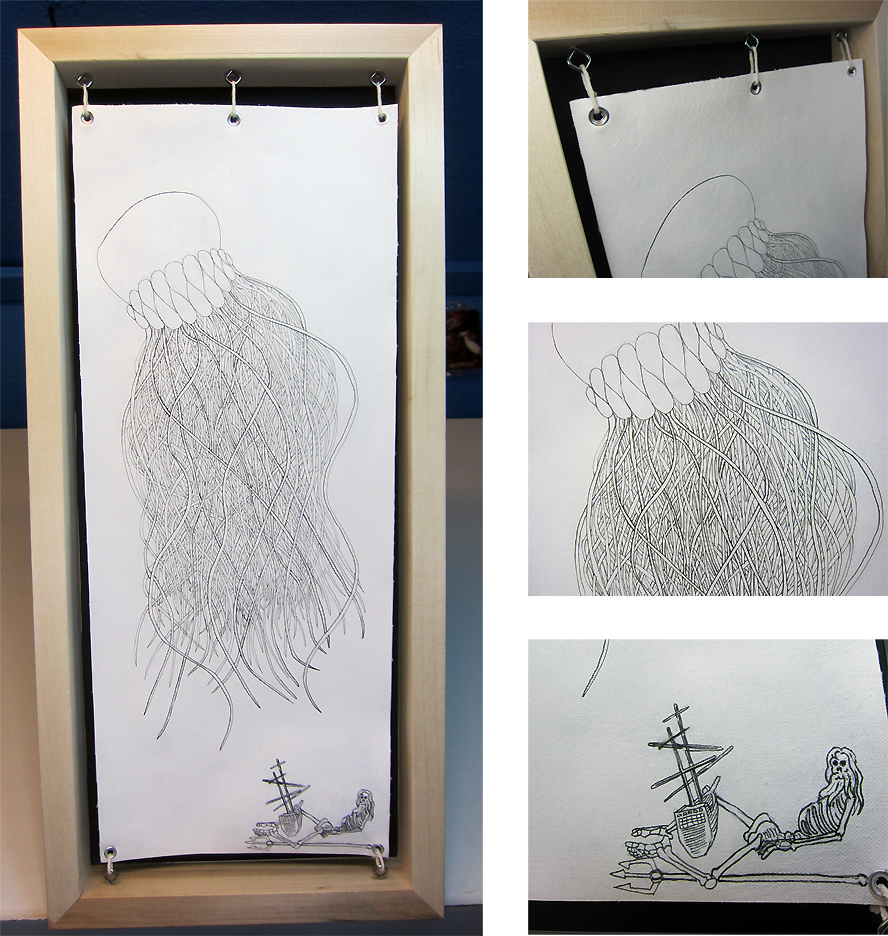 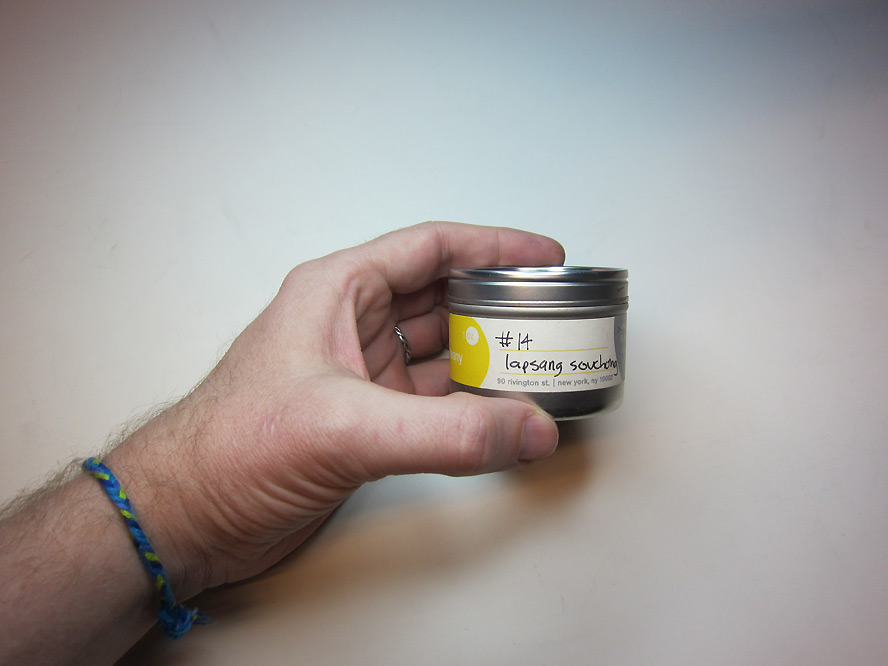 Lapsang Souchong tea is my favorite. And this tea tin from Teany isn’t bad, either. It’s an ideal place to find a lonely swamp, complete with a cabin, a giant leech, a hidden cave and a boat to try to escape from said lonely swamp (I’m particularly proud of how the boat can be seen from above and below the surface of the water). 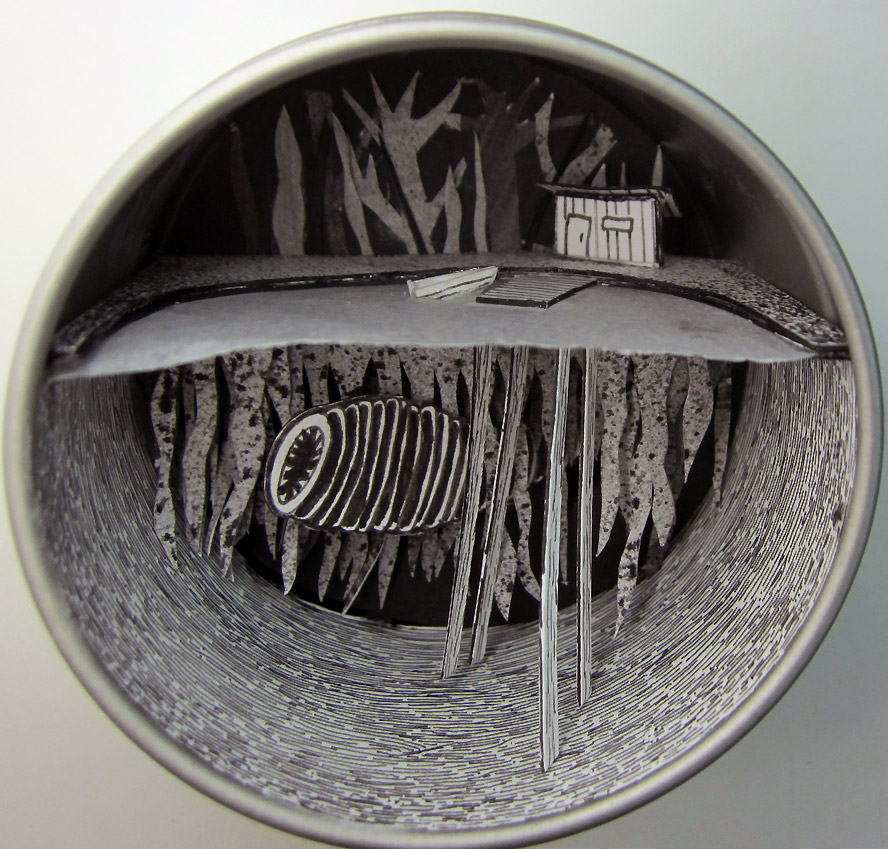 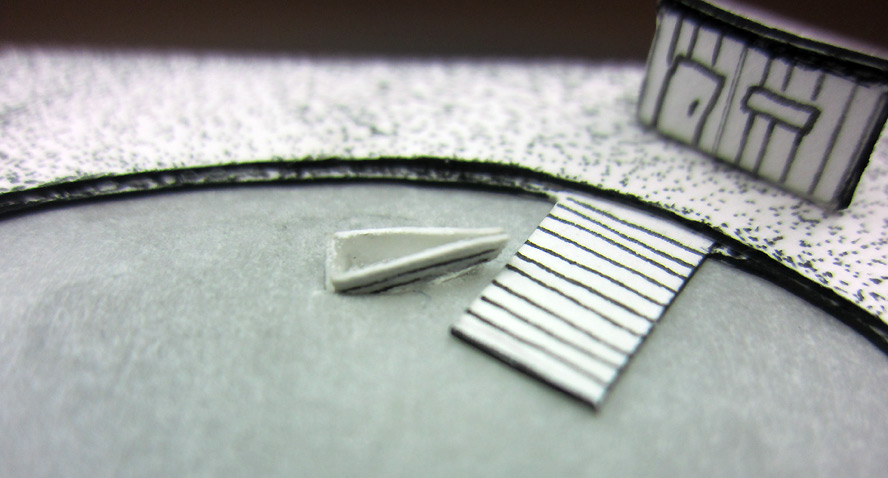 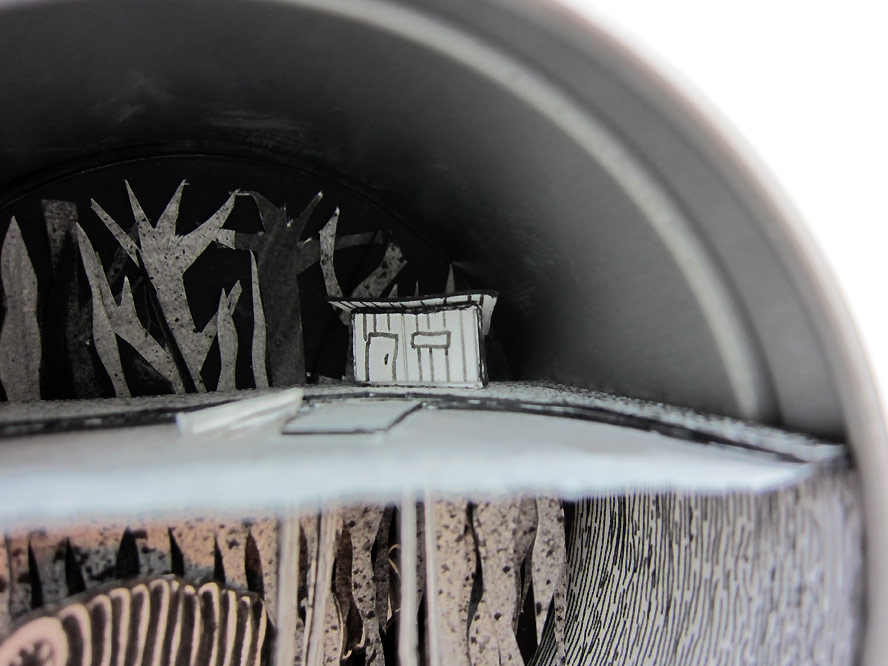 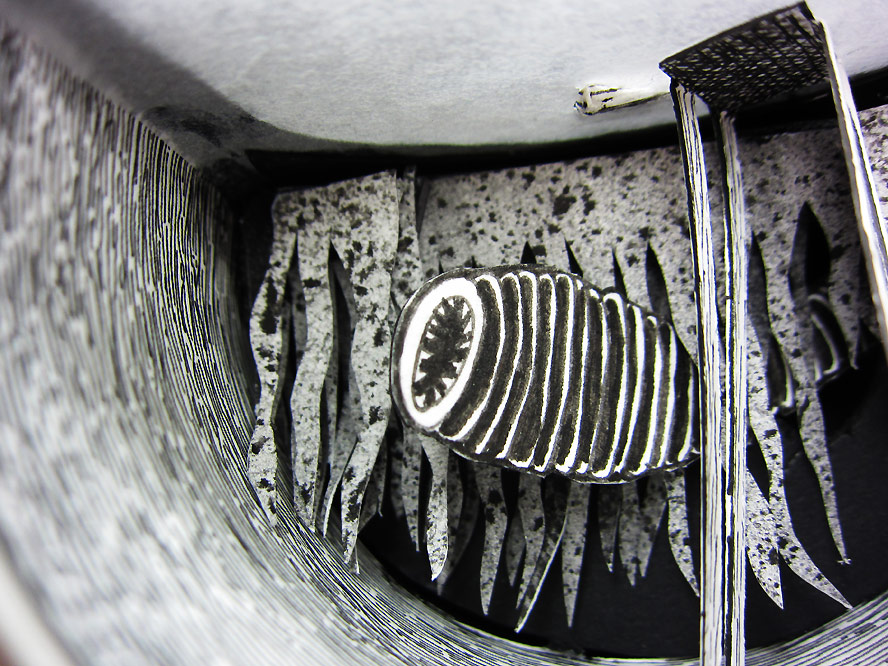 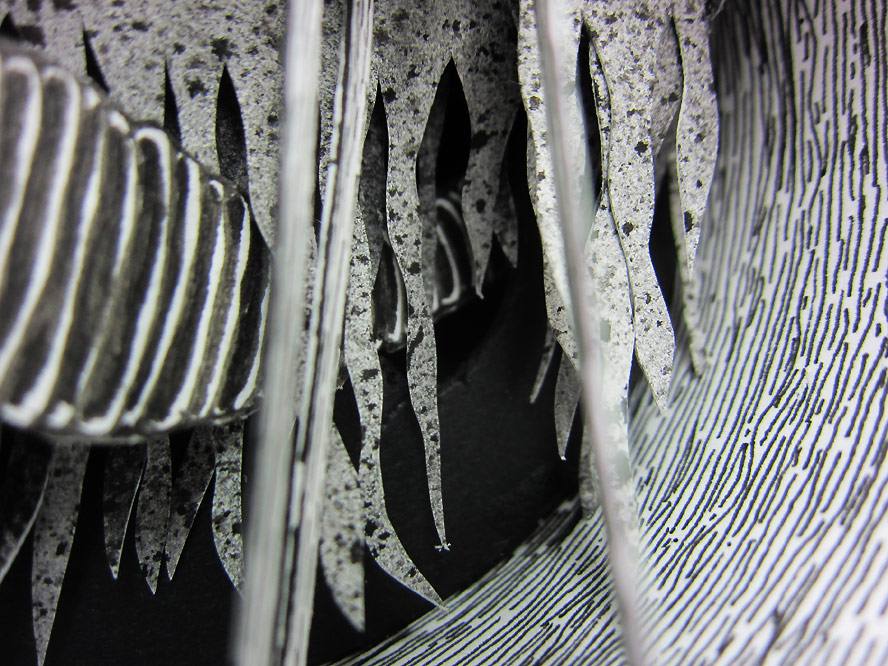 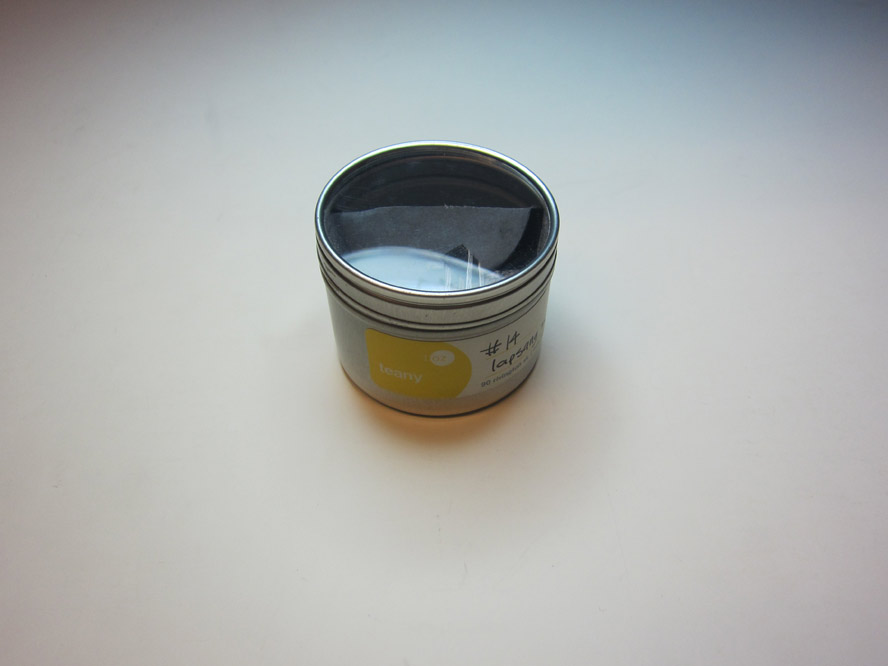 P.S. Please have a cup of Lapsang Souchong for me, will you? I’ve been caffeine free for a month now – no coffee, no black tea, no chocolate.

How about them apples? 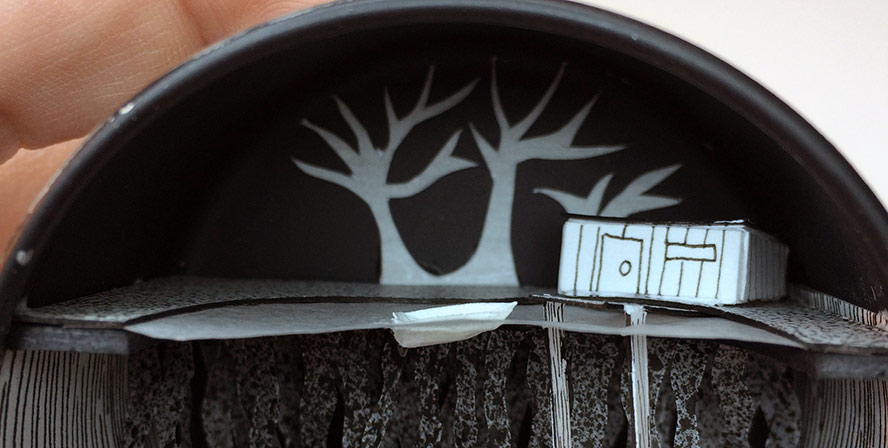 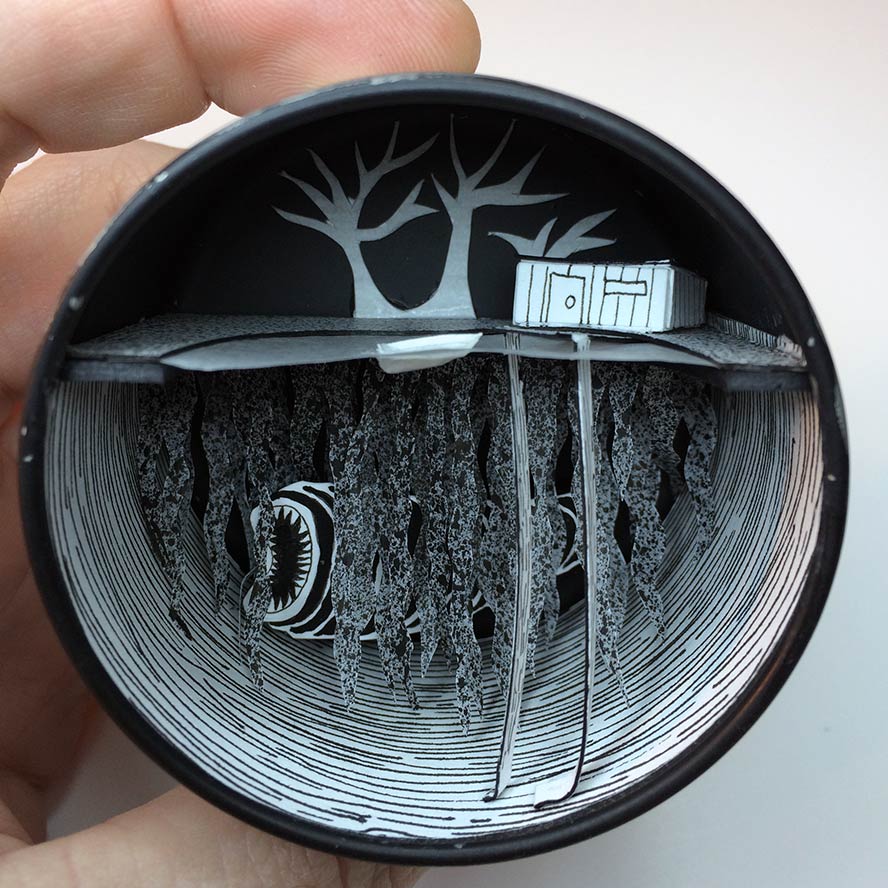 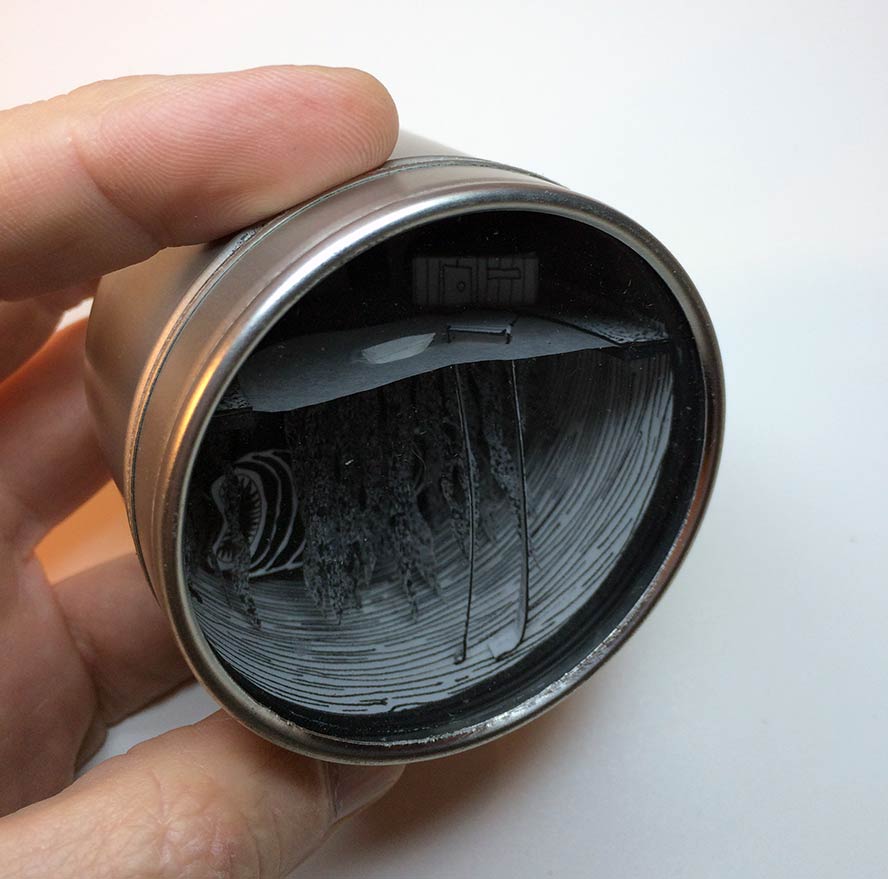 Even Gods yield to time. This diorama shows Poseidon’s deathly repose at the bottom of an anchovy tin among the shipwrecks deep in the Dead Sea. 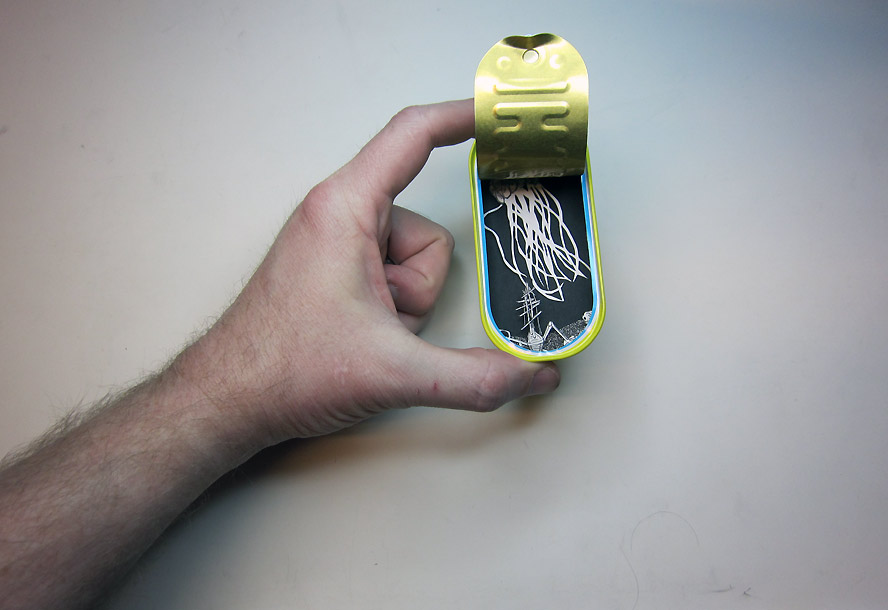 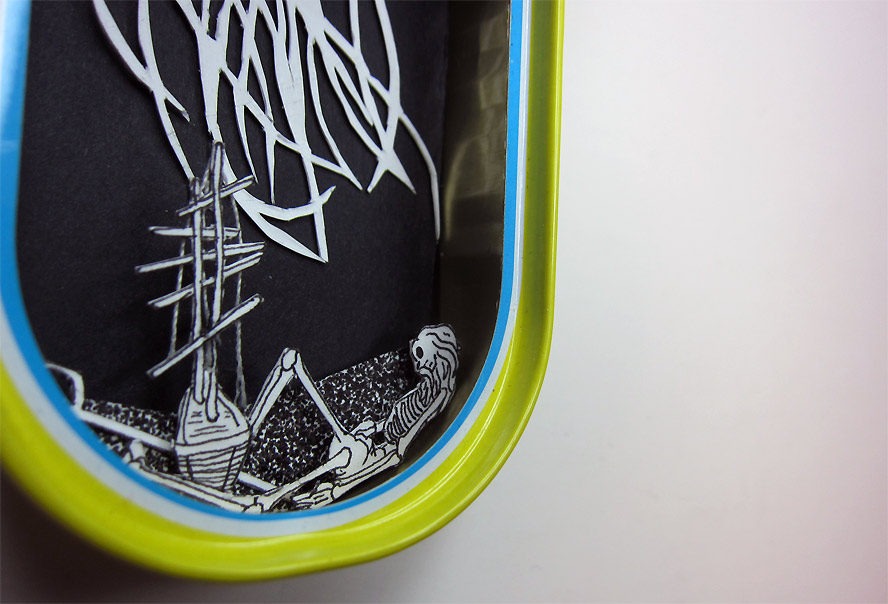 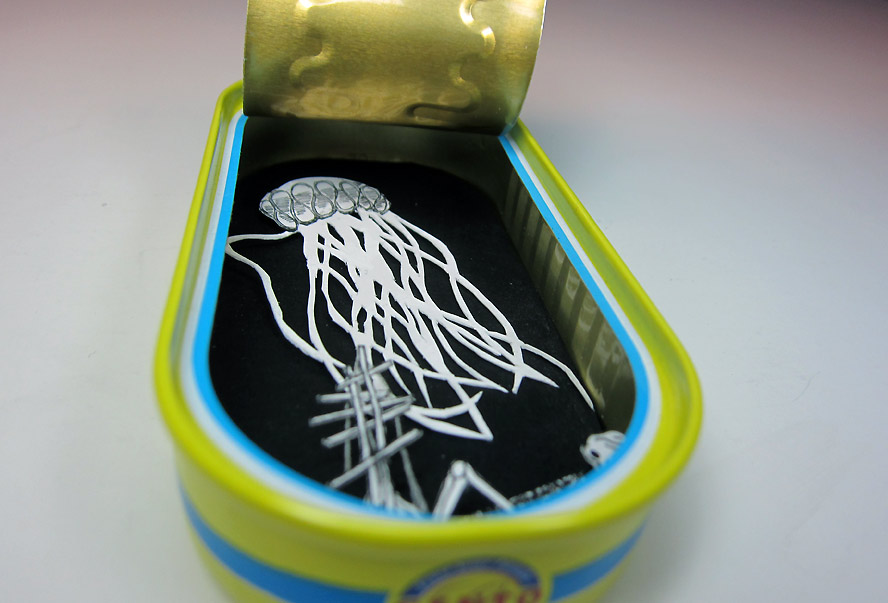 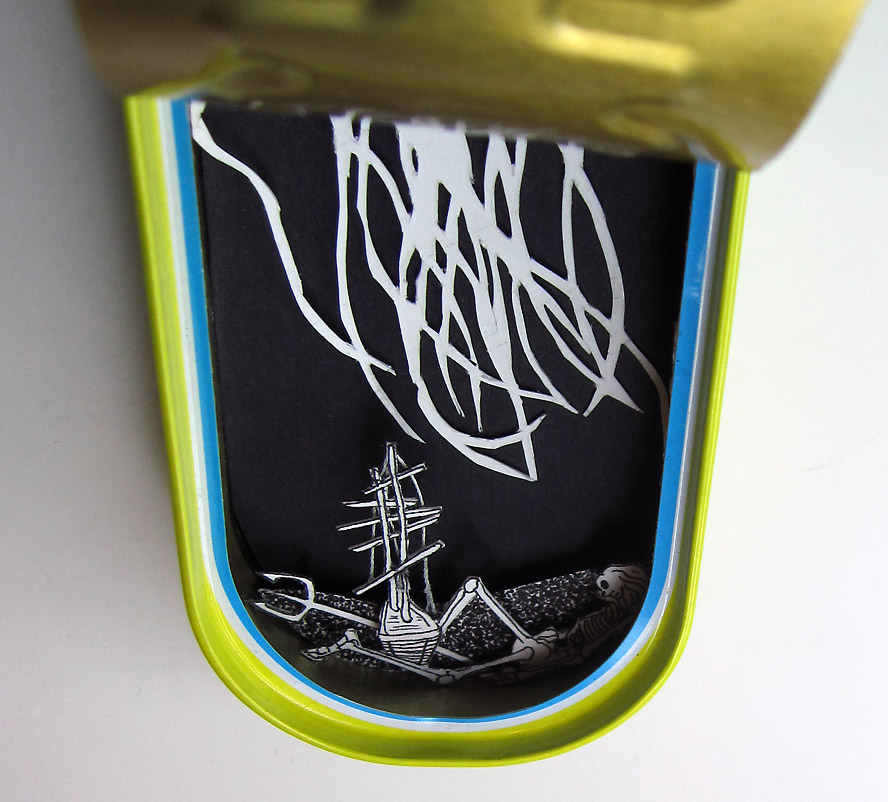