I found some random ART in the road on Saturday afternoon. I call it “AMRINHAMMER.”  I stopped traffic on North Avenue to record this for you: 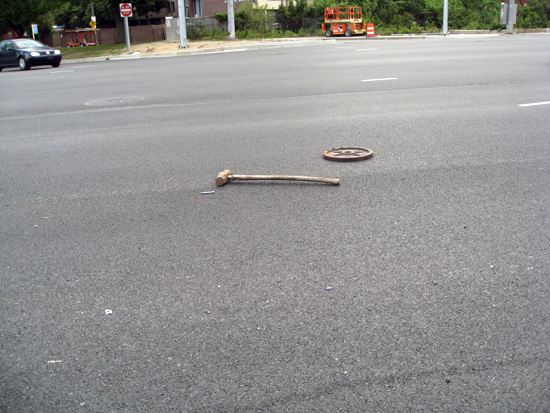 Baltimore is the city with ART and syringes in the road.

The title of this installation was informed by this:

When I was a kid, I spent a lot of time wishing I had a long skinny monkey tail like the Pink Panther.  I  imagined how I’d use it to help perform everyday tasks.   I still think it would be useful, although I’d opt in for a pointy devil tail these days, which is good for spearing circus peanuts.

When I was a kid, I got in really bad trouble for playing with matches.  I had a lot of army men, which I thought were kind of boring. I decided they needed to undergo genetic anthropomorphic mutation to become more interesting/useful. So, in my basement laboratory, with my assistant little-boy-from-next-door, I set out to create better toys. The trouble was, little-boy-from-next-door burned himself with a match, which brought a world of parent trouble down on me and my genetic anthropomorphic mutation toy laboratory. If I’d had a tail, I wouldn’t have needed an assistant in the first place and wouldn’t have lost my laboratory.

Some of my creations were awesome – a three armed ax wielding warrior with no head, a two headed cowboy, a barrel chested headless monster…etc. 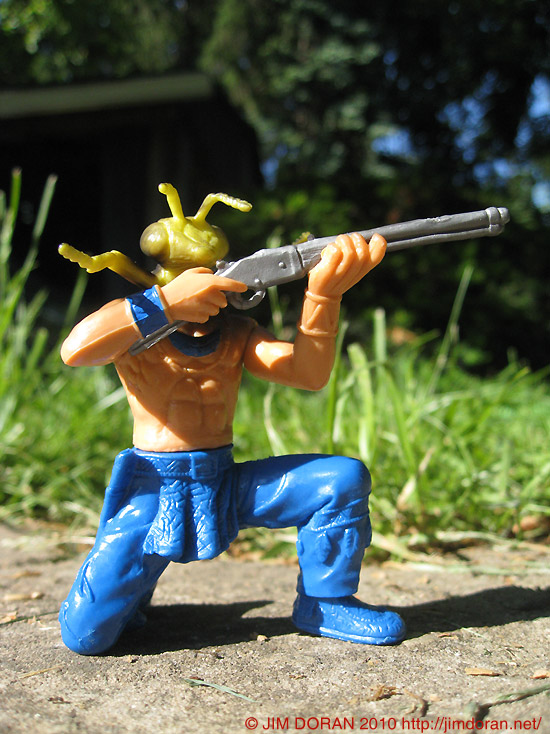 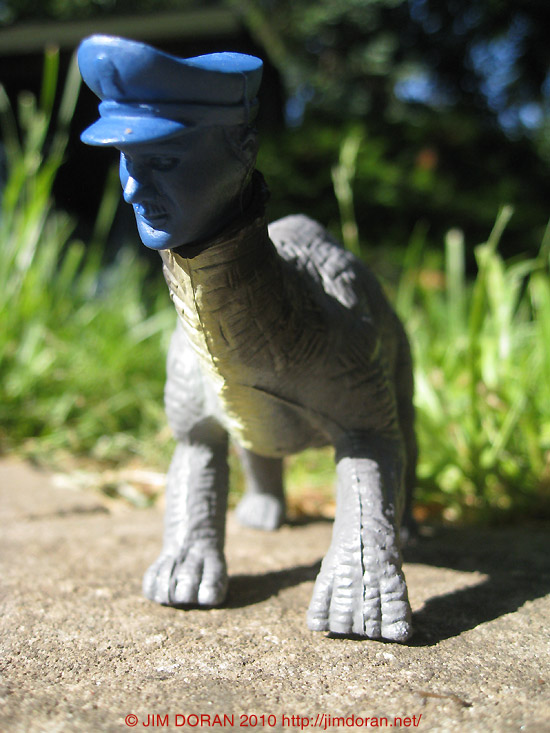 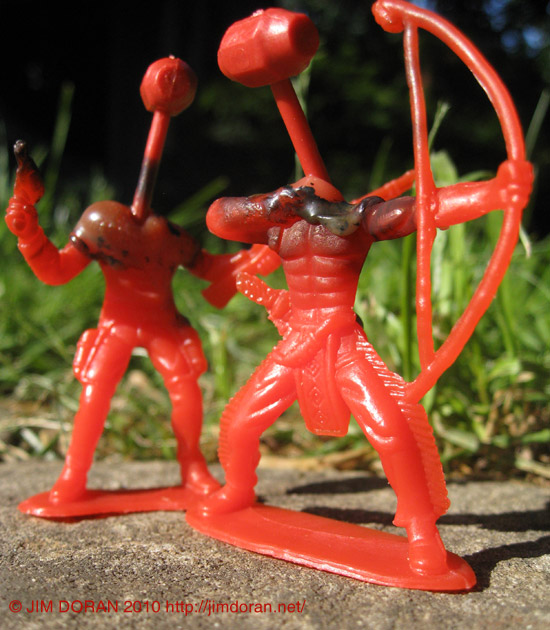 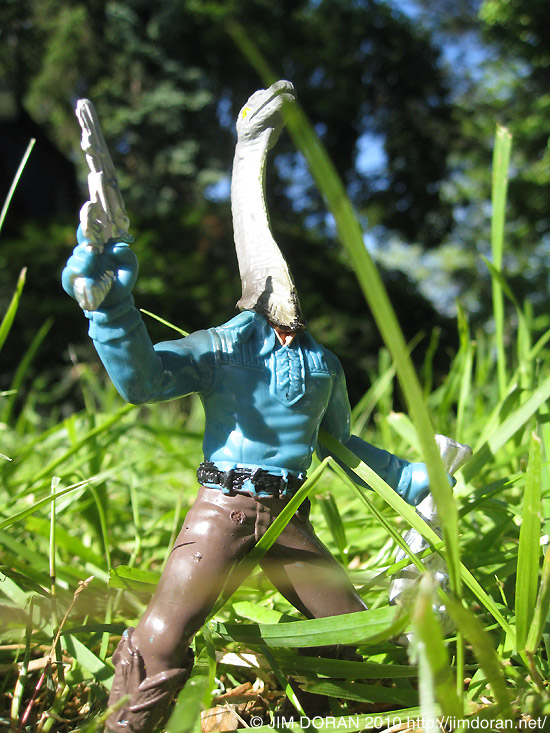 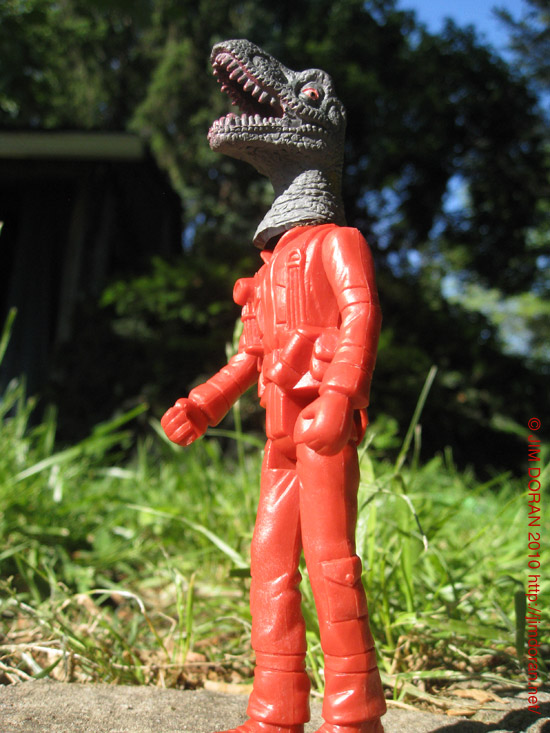 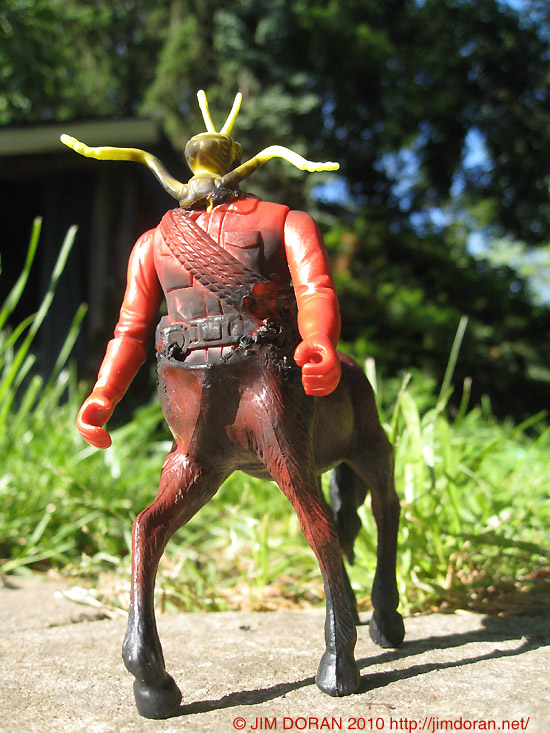 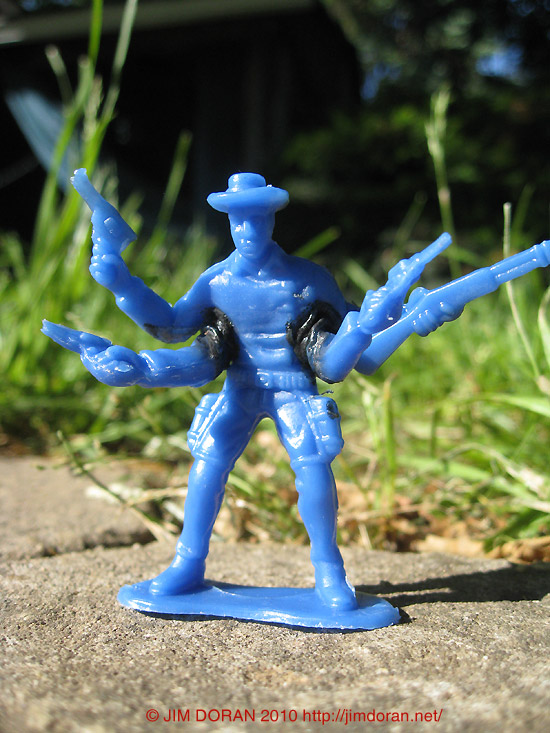 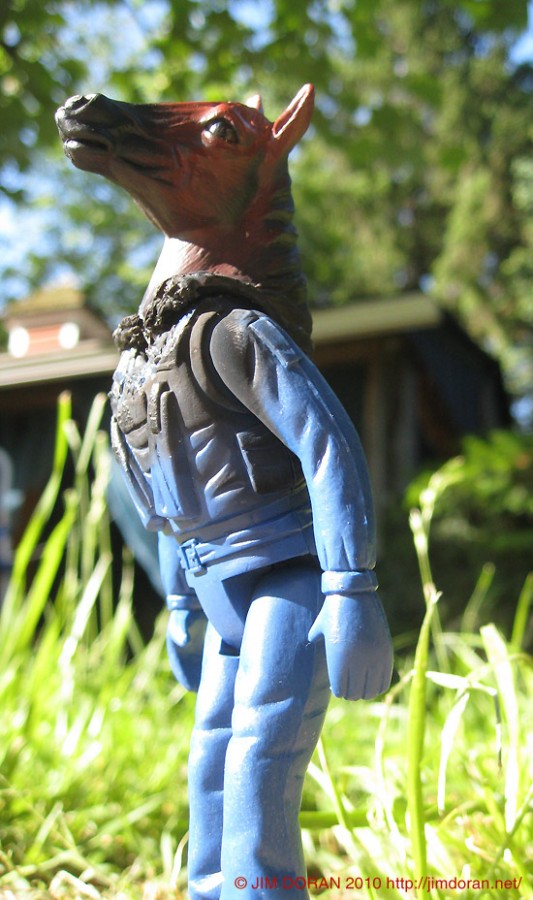 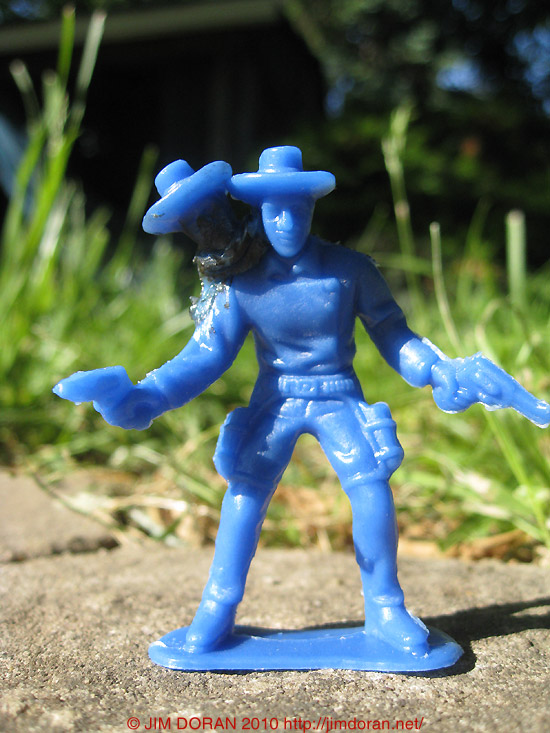 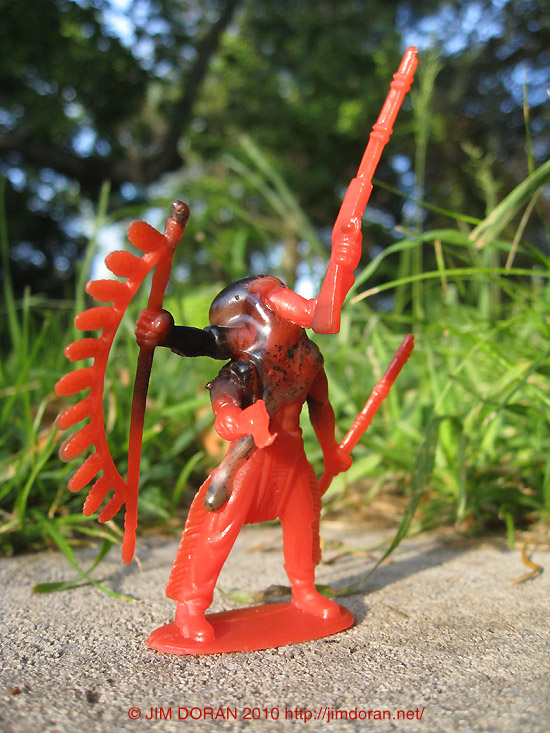 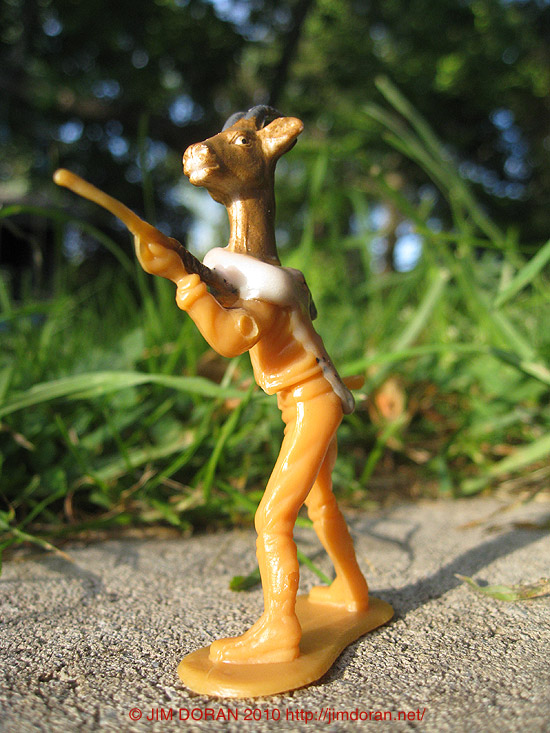 I’ll be back – there’s some pretty interesting action happening in the backyard right now. 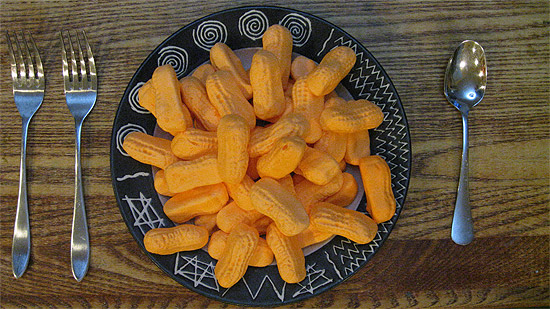 I got a call a couple of weeks back from ArtScape wanting to know how I actually intend to build an 8′ to 12′ circus peanut. I was notified today that my proposal has been accepted. 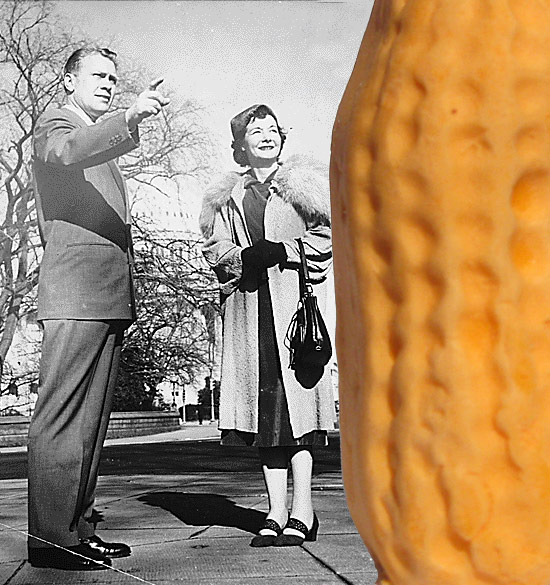 Circus peanuts were invented sometime in the 1800’s. They taste like bananas, although Wikipedia says that they were initially orange flavored. I suppose the original maker intended to “out weird” the creator of cotton candy.  Four of the major candy manufactures still make circus peanuts, though no one seems to hold a patent. I read somewhere that they aren’t easy to make, either, because they are molded instead of extruded like other shaped candy. And they are solid marshmallow.

I remember getting these around Easter as a kid. They used to inspire the sensation of motion sickness, and I’d just let them petrify long after the good candy had vanished into my gullet. The very last memory I have of these involved a great aunt who was having some sort of diabetic fit. She pleaded with my mom for  something sweet, and you guessed it – all we had for her gullet were petrified circus peanuts.

I have another childhood memory I’d like to share with you. Our house came with a really old refrigerator in the back of the basement. It had rounded corners, kind of like a giant tombstone. One summer, my parents put something in there – maybe a cucumber or zucchini or half a snake or something from our garden.  It was forgotten until one day, I looked in the fridge and found the blackened mummified remains of whatever it was. It just sat there, haunting the cold, tombstone shaped fridge, like a forgotten petrified turd. I was obsessed with it, and, I’ll admit, a little afraid of it. 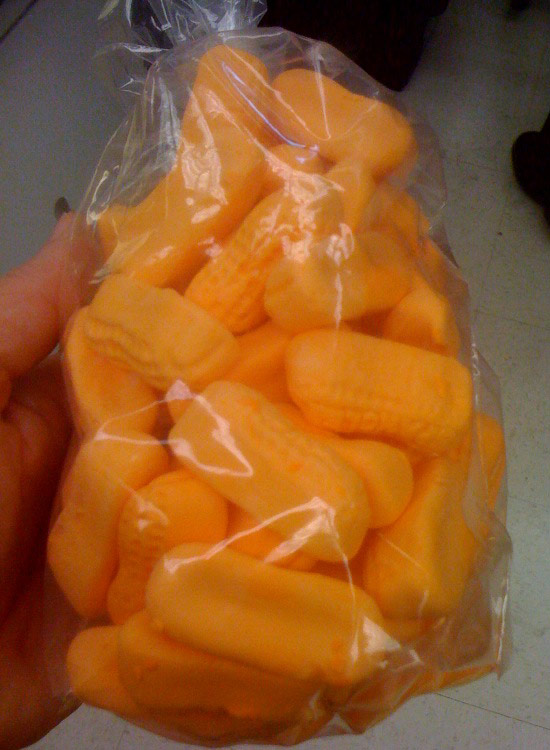 Back to the present day, I bought a bag of circus peanuts for research purposes last week. The guy in line behind me said, “I’m glad SOMEONE likes those things. I’ve never seen anyone buy them.”

“I don’t actually like them,” I replied. And then I had to explain this project. I’m going to be doing a lot of that in the next several months.

In the years since my diabetic great  aunt and mummified frozen remains of my childhood, I’ve often stopped in the store and wondered at circus peanuts. They are strangely beautiful and yet slightly horrifying, like some orange, forgotten, mummified remnant in the tombstone refrigerator of life. It is worthwhile to think about them.

Two more Spark responses, for Round 7. My partners were Melissa Pasanen, haiku master, and Cassie Premo Steele, who is just a creative master.

I came up with a whole series of things from Melissa’s haiku, and I’m still working on ’em. Here’s rabbit hole I ventured into: 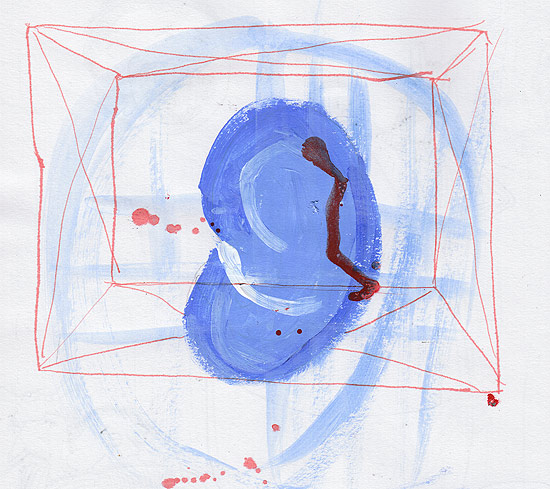 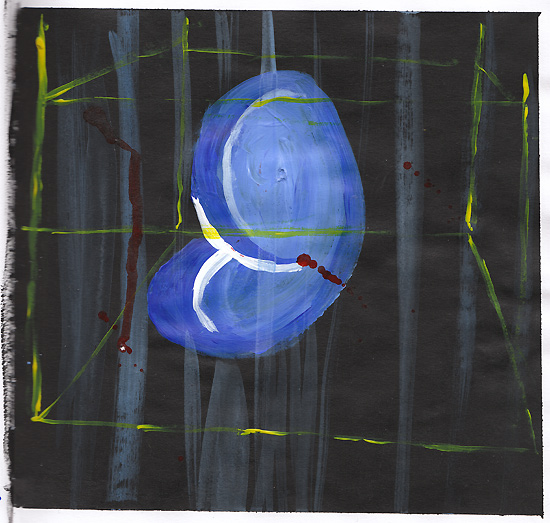 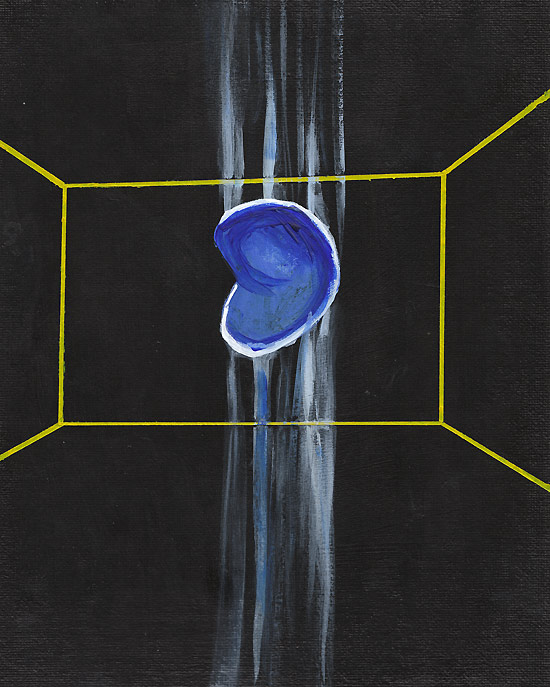 My other response went like this, which is something I’ve been thinking about lately, in addition to skeletons. 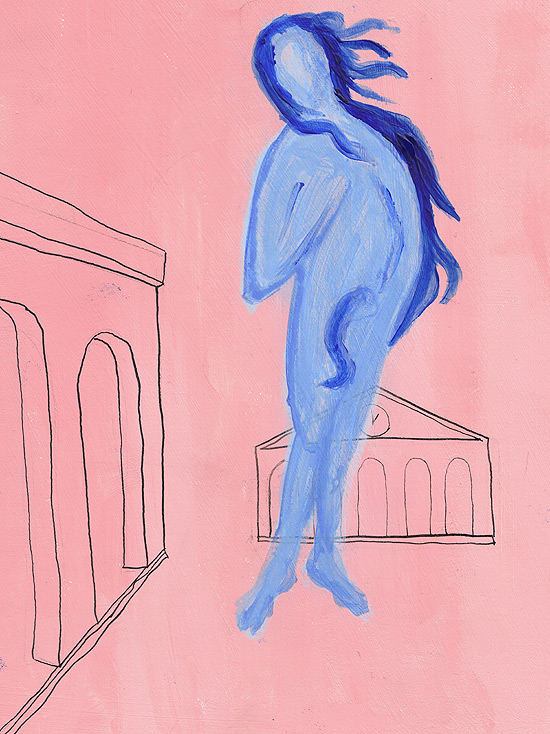 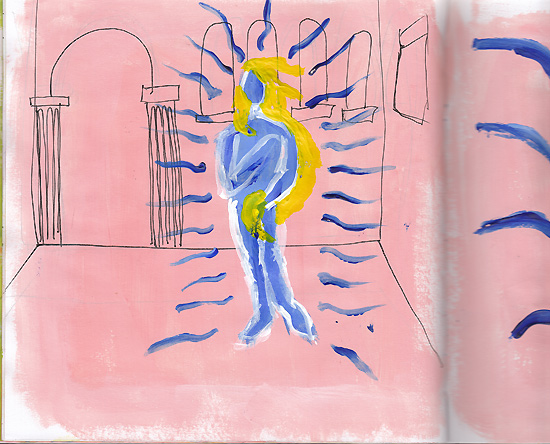 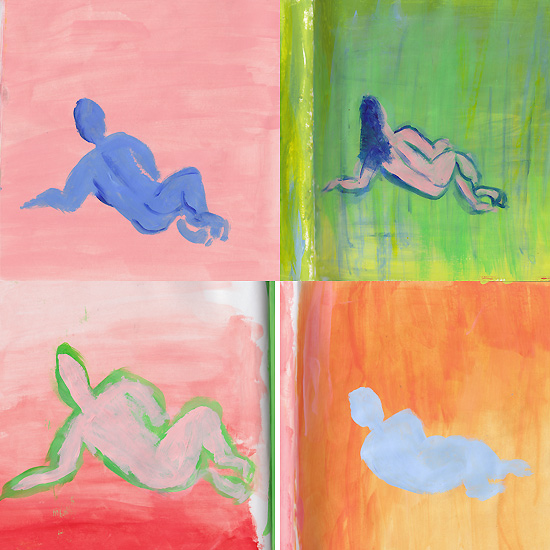 Don’t eat acrylic paint – it’s isn’t good for you. Or your bum.

In an attempt to balance my kids’ urges to practice corporate accounting, financial law and quantitative decision making for business, we make art together. For the second year in a row, we participated in the National Arts Program Exhibit at Johns Hopkins (December ’09). 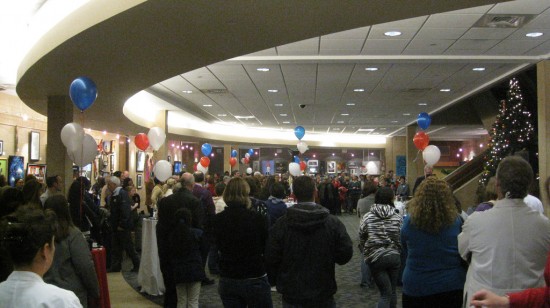 Lily made this painting specifically for the event. She started off painting pictures of Coraline and arrived at the Solar System. It has shooting stars. 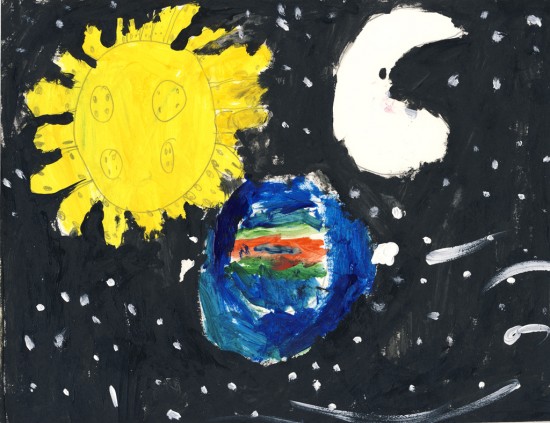 Cocoa entered her Oscilloscope, which usually hangs in my studio. I LOVE this painting. 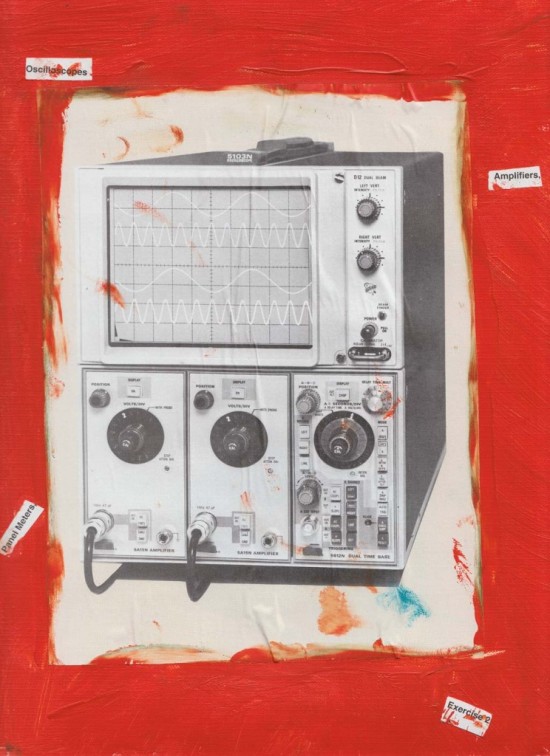 My friend and colleague RJ entered a photo, too. It’s the one of himself, taken alone with an old, manual camera. We haven’t worked out how he did it. 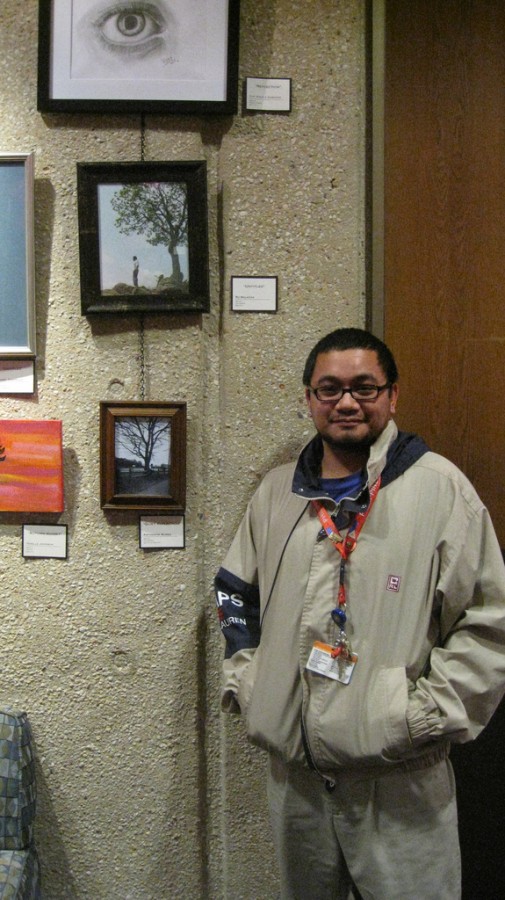 To my astonishment, I took home a first place prize. Dr. Ed Miller, CEO of Johns Hopkins Medicine and Dean of the School of Medicine handed me an envelope. 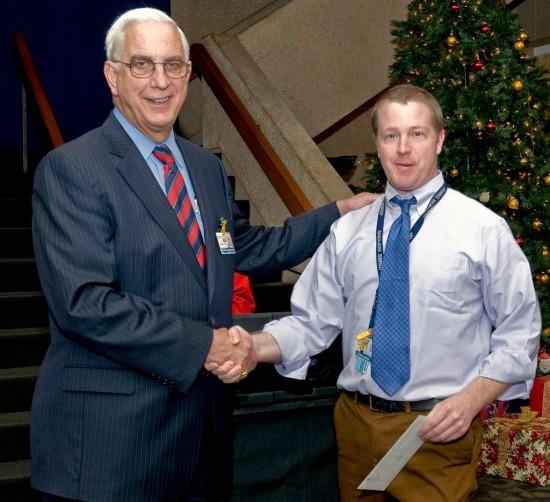 Here’s me and the drawer… 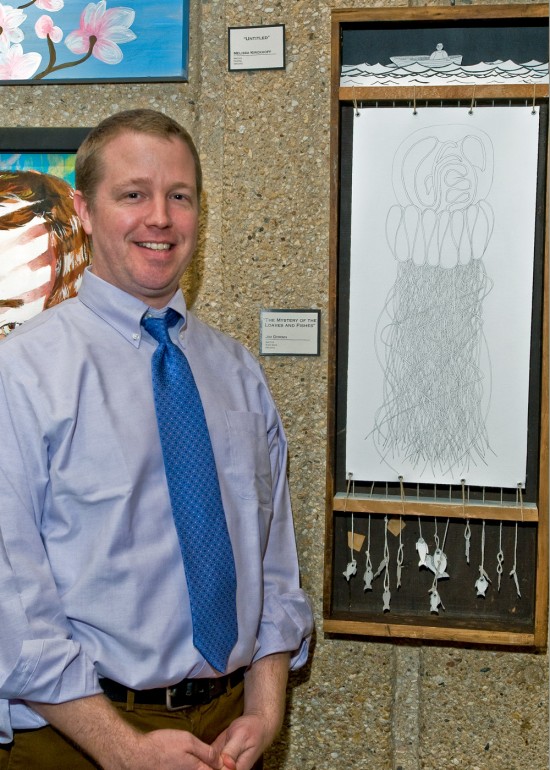 Finally, a better photograph of  the Mystery of the Loaves and Fishes, an  impossible-to-photograph-well piece. Click the one below for larger. 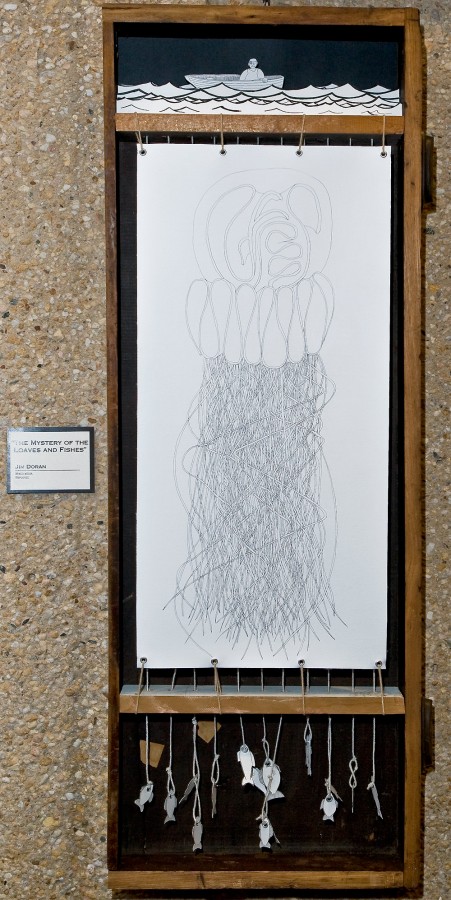 Thanks to Fred Dubs for the last three pics here.