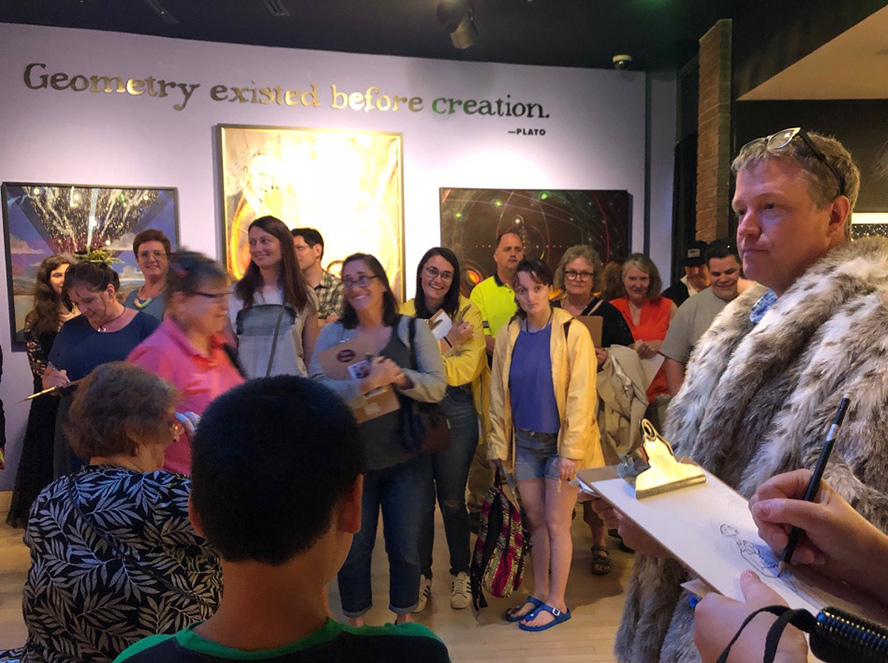 Being a part of the great mystery show at AVAM has been one of the great honors and pleasures of my life. It is a thrill to see my art in the same room with Ingo Swann’s paintings, and around the corner from Edward Gorey’s The Gashleycrumb Tinies and Georges Méliès’ A Trip to the Moon. 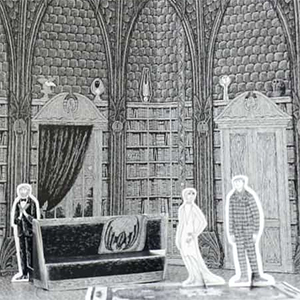 After I was well underway with my dioramas, I started hearing that my work is reminiscent of  Gorey. I wasn’t familiar with him until an acquaintance told me about his toy Dracula Theatre, which was inspired by the Broadway production that earned Gorey a Tony award for costume and set design. It made me swoony, and then I came into several of his books. Gorey had a fantastic sense of humor, elegantly placed around dark subject matter, and super human crosshatching abilities, which are two of my favorite qualities in another human being.

I read several books as I was preparing for this evening’s talk and my favorite is from CJ Verburg: Edward Gorey On Stage: a Multimedia Memoir: Playwright, Director, Designer, Performer. Verburg helped Gorey produce around twenty “Entertainments” in a community theater near where they both lived in Cape Cod. These “Entertainments” were plays that had twenty or so acts running from two to five minutes each. Gorey wrote and typed the scripts (something he began doing during WWII, when he was drafted to a desk job in Utah), designed the costumes, made puppets, arranged for the music, and designed the programs and posters. Verburg seemed to know Gorey better than the other authors I sampled.  I think the later part of his life, when he was so involved in these projects, is fascinating. Many of these were incomprehensible to the audience and abstract/absurd.

Gorey loved ballet, and dance informs many of his characters’ gestures. He would attend some 160+ performances on the New York City Ballet a year. He wore a fur coat, jeans and white converse sneakers. Verburg tells great stories of Gorey’s time at Harvard and the Poet’s Theater Project, of which he and his roommate, Frank O’Hara, were members. 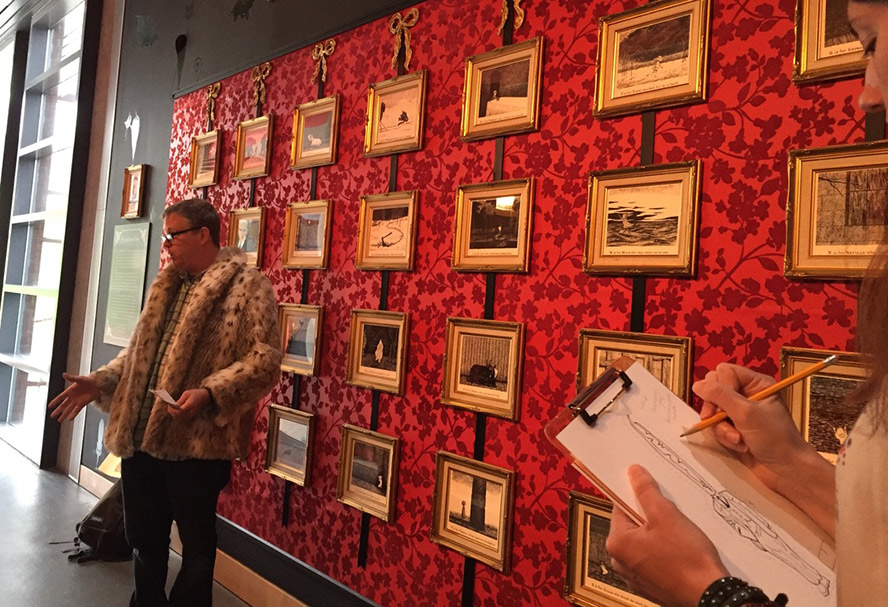 I talked about many other things, but one of the Great Mysteries I solved for myself is this: Gorey was influenced by French artist Charles Meryon. He collected some of his prints, which were heavily crosshatched, and quite nightmarish. Another interesting fact: Gorey was known to paint his toenails. Gorey claimed to be a Taoist, and maybe a surrealist. Gorey was also a voracious consumer of books, movies and television. According to his bio in the Gorey House website, he accumulated around 25,000 books by the time of his death at age 75. He liked soap operas, Third Rock from the Sun,  and anything he found entertaining.

So many of Gorey’s protagonist kids meet grisly endings.  When asked “Why do you hate children?” Gorey responded with “I don’t know any children.” 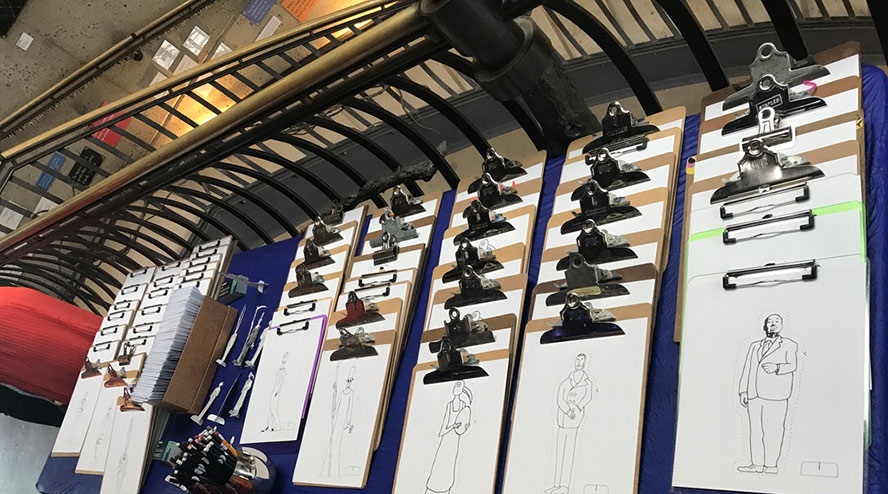 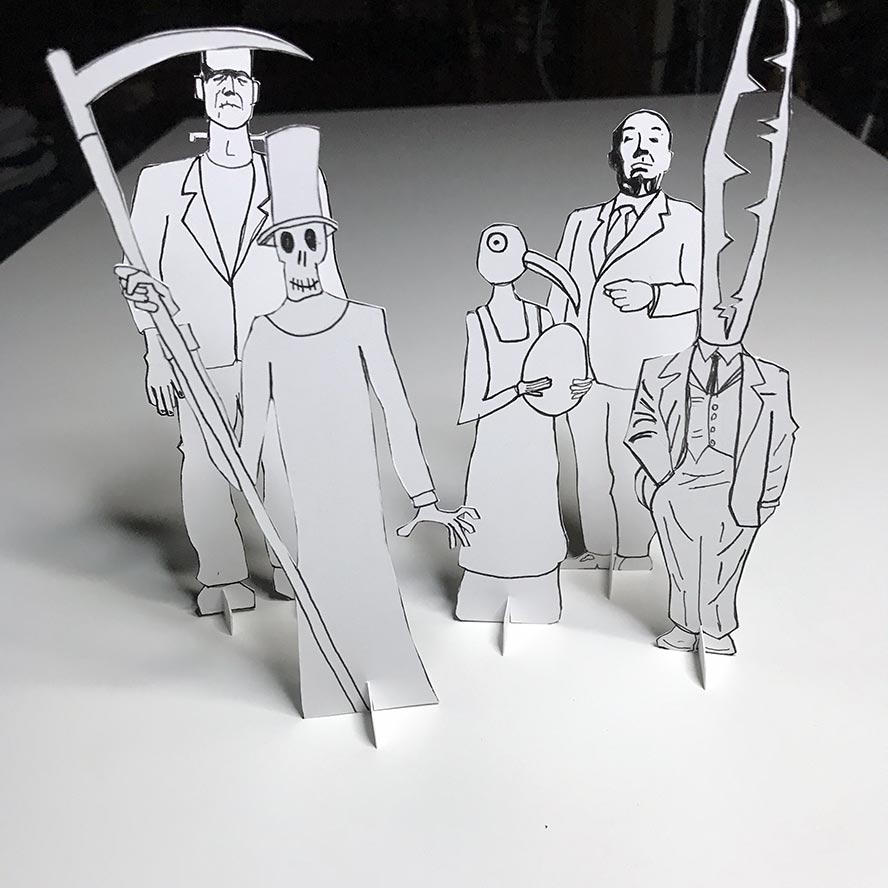 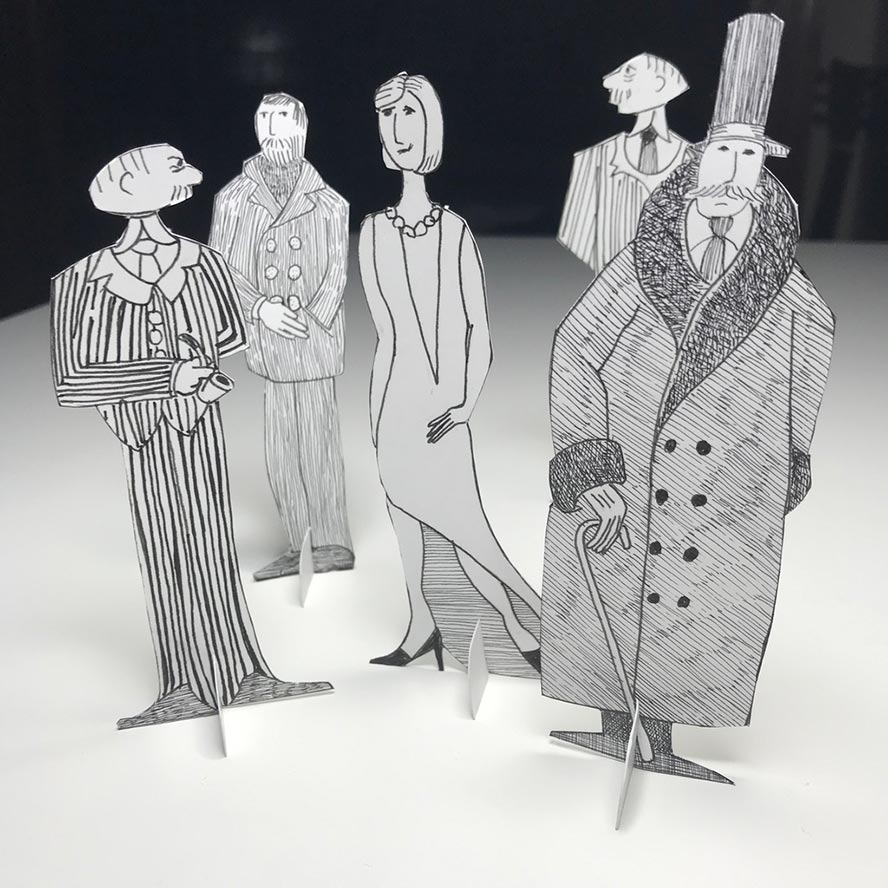 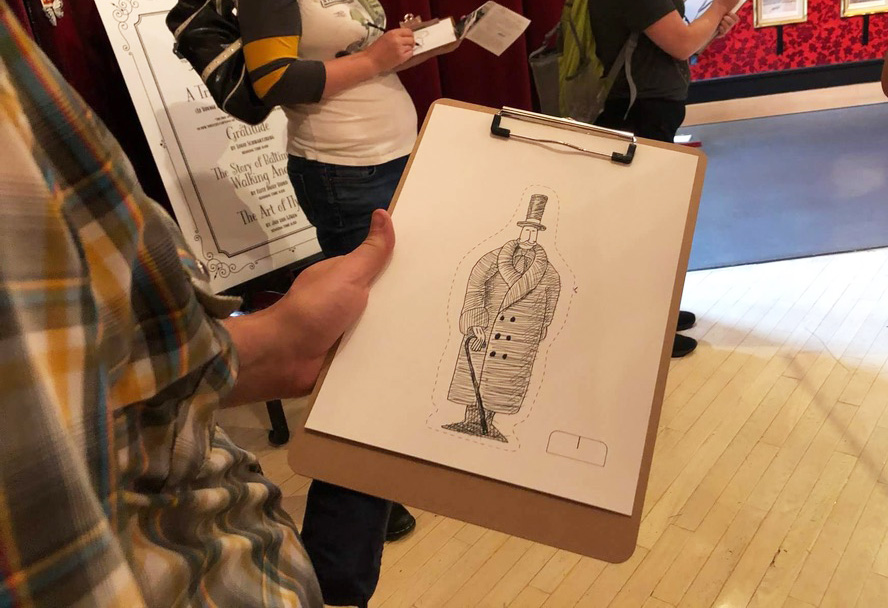 The latter part of the evening involved a crosshatching exercise, inspired by the toy Dracula theatre. I made my own characters, and a zine with some basics on hatching techniques. 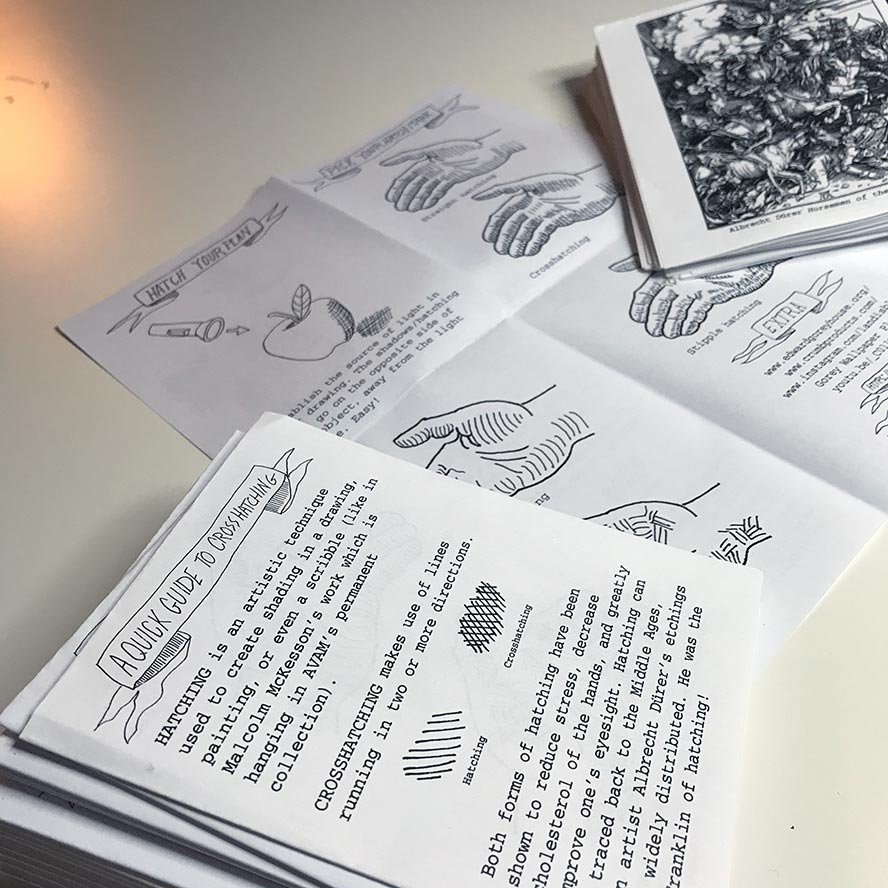 I have more of these. If you’d like one, please write to me.

I’m struck by how many of my favorite works are made by pairs of collaborators. The Quay Brothers, Max Porter and Ru Kuwahata of Tiny Inventions, Nathalie Djurberg and Hans Berg, Max Ernst and Dorothea Tanning, and, of course, Mary Reid Kelley and Patrick Kelley.

I stumbled on the Kelley duo on Instagram, and was delighted to be able to see their work with my daughter at the Baltimore Museum of Art.

Mary Reid Kelly writes clever, funny rhymes full of puns and witty phrasing, that are rooted in historic fiction. Her partner, Patrick Kelley, produces, edits, and stars in their videos with her. The black and white films seem almost animated and cartoonish, and reference Cubism and German Expressionism. Sometimes, Mary’s family will perform in the videos, like in The Syphilis of Sisyphis.

The rigor of their research is evident. Increasingly, I’m becoming aware of the importance research plays for many artists. I see (and value) the benefit of academic approaches to information gathering, processing and assimilation.

The exhibition includes two films featuring their signature black-and-white sets and costumes. This is Offal (2016) is inspired by Thomas Hood’s 1844 poem, The Bridge of Sighs, in which the narrator, a forensic pathologist, laments the suicide of a young woman whose body is pulled from the Thames. The Kelleys’ new film, In the Body of the Sturgeon, brings a feminist perspective to an exploration of life on a submarine stationed in the Pacific at the end of World War II, with the USS Torsk docked in Baltimore’s Inner Harbor inspiring the mise-en-scène. The exhibition also includes six light boxes featuring characters from both films and elements from the Kelleys’ sculptural sets.

This is an excerpt of This is Offal (2016) that I made with my phone while at the BMA. I LOVE the anthropomorphic organs and appendages!

Mary Reid Kelley says the following about This is Offal:

In Offal, this invitation is also taken up by its characters: the organs of the corpse try to “solve” the mystery of the suicide of the woman to which they belong to. The organs spend a lot of time blaming each other for the act, complaining of various betrayals: the foot is accused of slipping on the bridge, the brain is blamed for the idea to do it. Betrayal is a central theme for me, betrayal in one form or another occurs in almost all the films. I have also long thought of wordplay and particularly puns as betrayals within language.

I love these productions. Mary’s writing – the dialog – is brilliant by itself. Then, I’m always deeply entranced by the decor and set design, as well as the costumes, and video production. This work is a clear synthesis of both Kelleys’ effort, talent, and intelligence.

According to Patrick, the characters are shot on a green screen background, and then the sets are produced/added to the background.