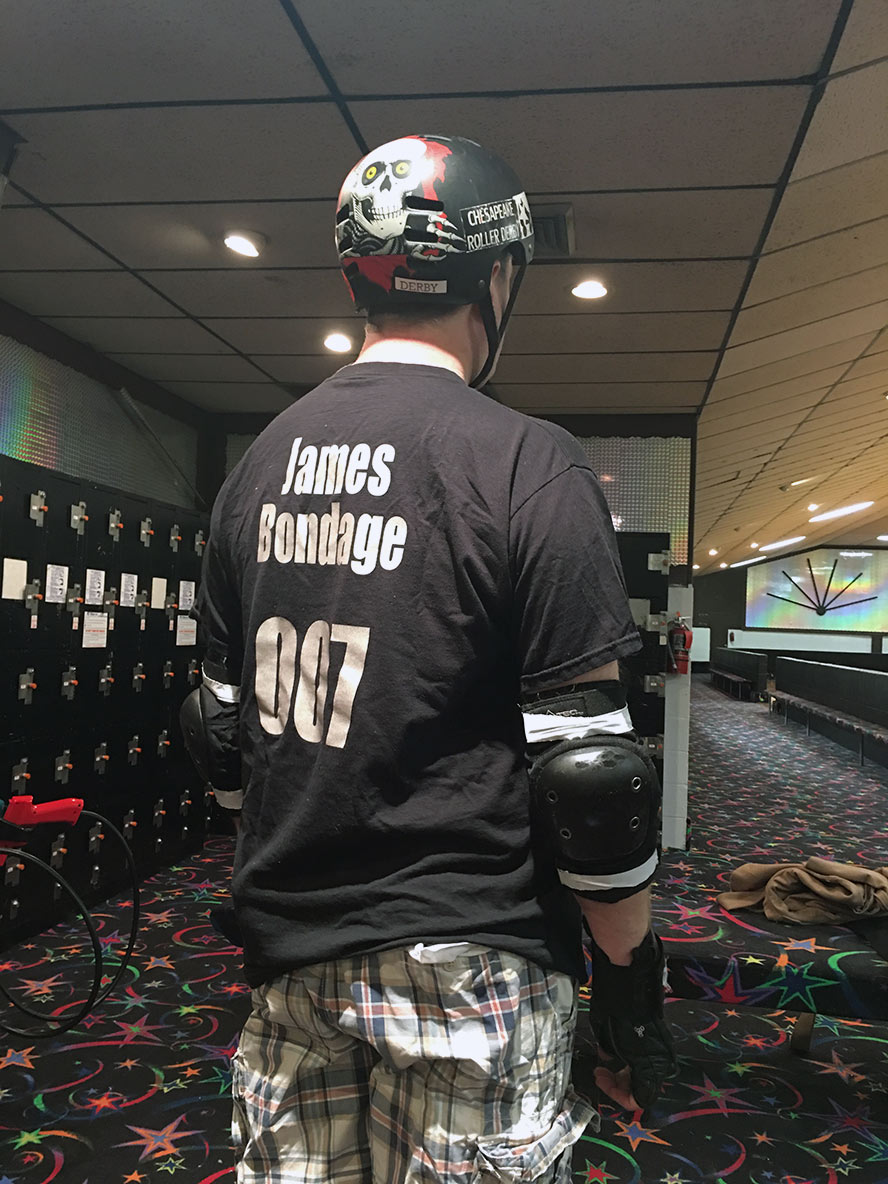 Only to return ASAP.

At the last game, my awesome teammates handed me a gift certificate for new skates.  I just got a message from the Derby Star Pro Shop that they are ready. I got the Riedell 265 boot and Sure Grip Magnesium Avenger plates. I like Atom Stinger wheels (88A) – I haven’t skated on anything harder yet. And I’m using Rollerbones Bearings this time, instead of my usual Bones Reds.  I’ve destroyed two sets of those in a year. 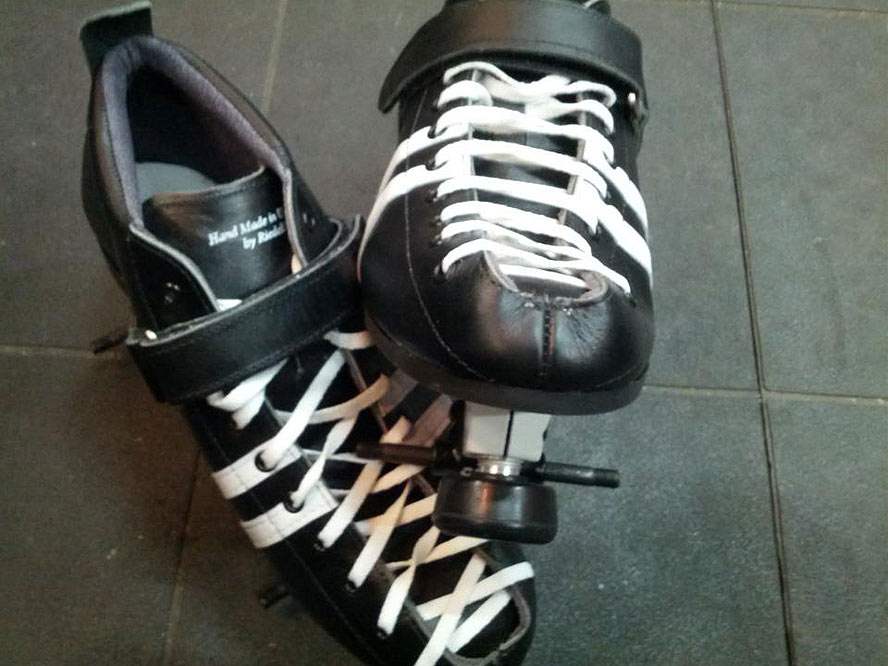 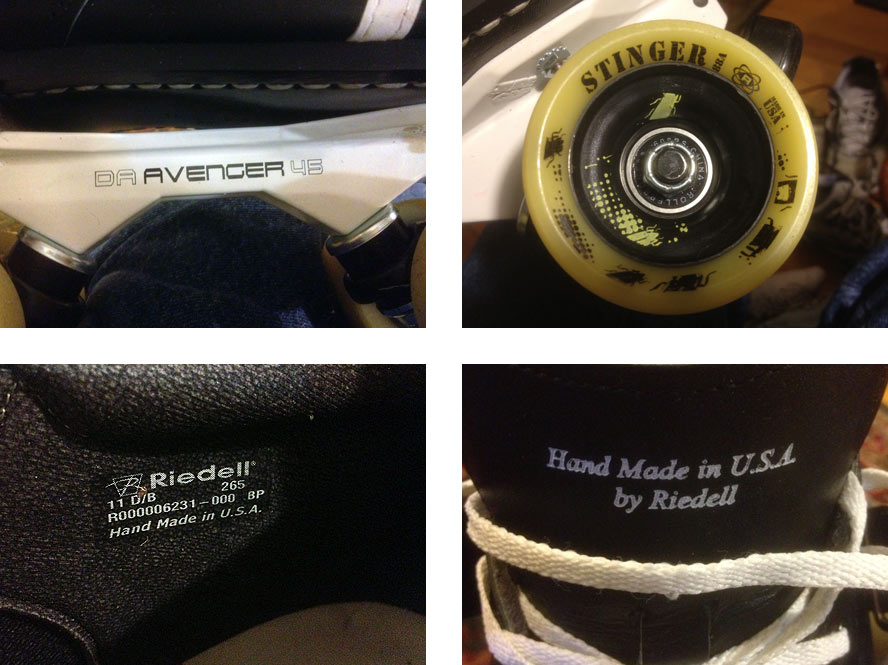 I bought my first pair of skates from Marzipain for $50 on May 31, 2011. They were great to get started with – although a size too big, which made running toe-starts impossible. I wore them from June until December of 2011.

I then picked up a pair of Rock “Speed Freaks” on ebay for around $100.  I figured if my buddy Just Tim could do the amazing things he did in them, they should be more than good enough for me. They are a good rookie starter skate, designed for casual skating and/or maybe 8 months of derby skating. Mine made it though 14 months of hard skating. I suspect they are the culprit involved in my twisted ankle – they resemble blown out sneakers. 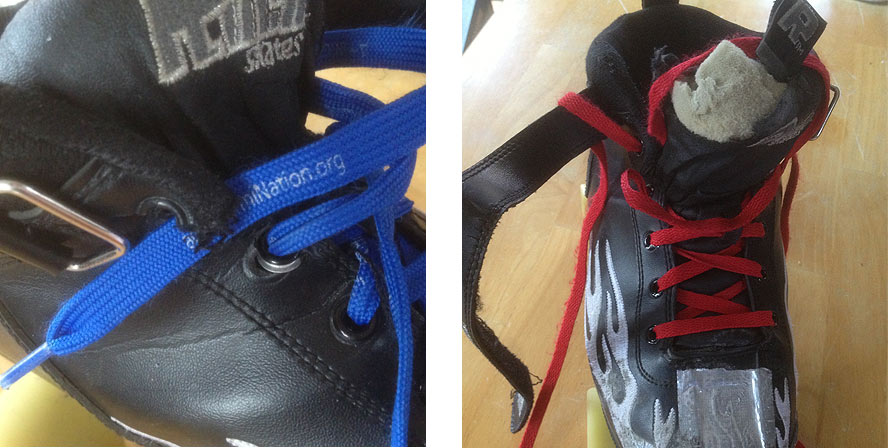 And here are my new ones – I picked them up after work. I can’t wait to go skate. 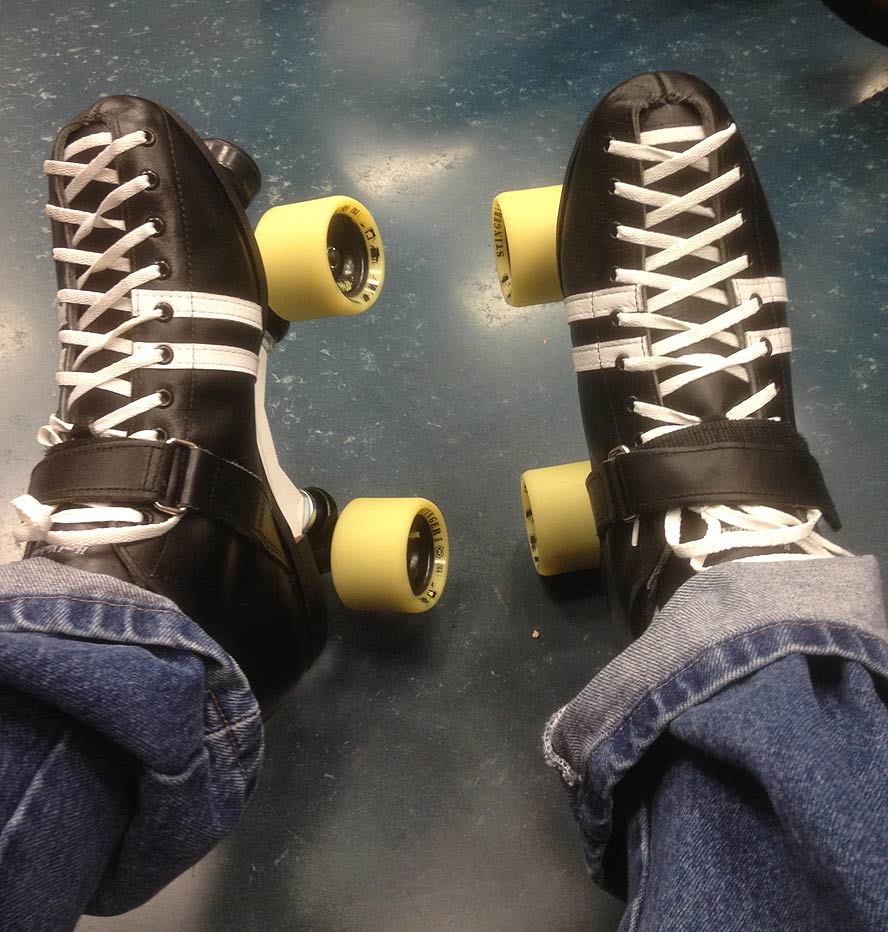 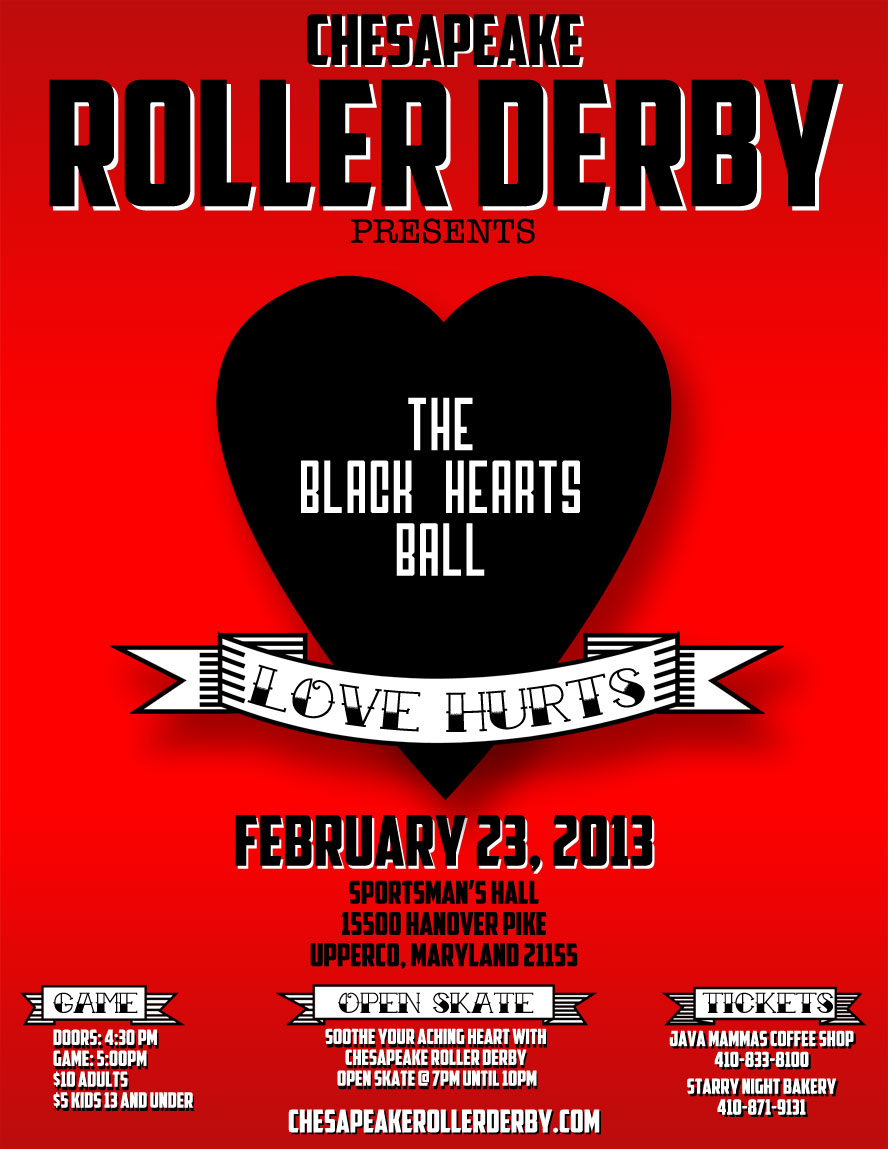 Our next game is on February 23, 2013 at Sportsman’s Hall. Join us for an open skate immediately following the game – featuring awesome music and, well, us.

It’s now March 3, 2013. Rather than do a new post to recap the game, I thought I’d just add to this one. I like the idea of keeping the flier with the game pictures and recap. 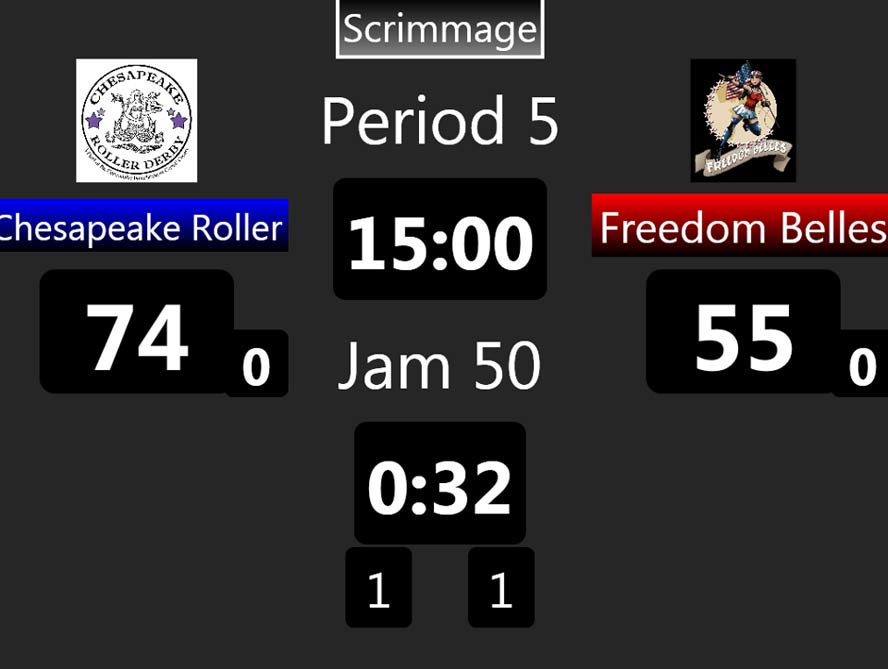 A lot happened in the time between making the poster and the game itself. I decided to take a break from being on the league’s Board of Directors (most of us did). When I was in college, a couple of my buddies hosted an event called the “Black Hearts Ball” which was a spoof on the annual February school dance. It was informal and the dance was for single people as much as couples. The music was always great. I was hoping to recreate that feeling at the rink after our game, and I wanted to use the theme for our internal teams. Our coaches then decided to invite the wonderful Freedom Belles to play us. The rink didn’t seem excited about having us DJ the open skate after our bout, so I let the idea slide.

About two weeks before the game, I twisted my ankle at practice. It was a weird freak incident that happened while I was talking with a skater about positional blocking. When I stood up after the fall, I thought “Hmmm. I’d better take my skates off.” I’ve noticed that when I’m warmed up and playing, I don’t always feel injuries until 4:ooAM the following morning.  The following day, my ankle felt good and sprained.

I fell again about a week later and was certain I’d be out of commission for weeks. But when I woke up the next day, my ankle actually felt a little better. I decided to risk the game. My medic taped my ankle, which helped a lot. (note: the good photos below are courtesy of Gary Bell, Jr and Dreams in Focus Photography). 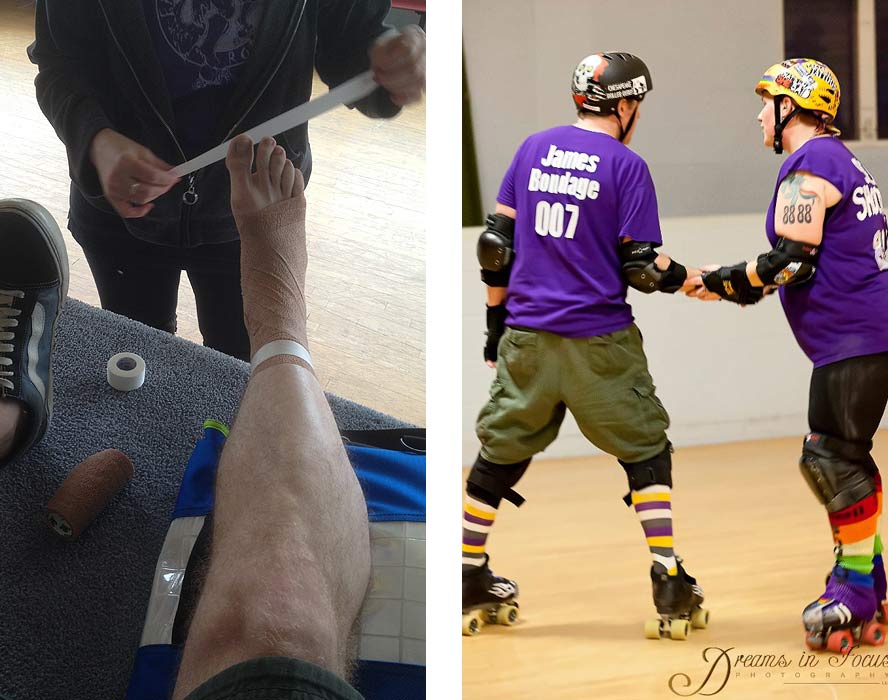 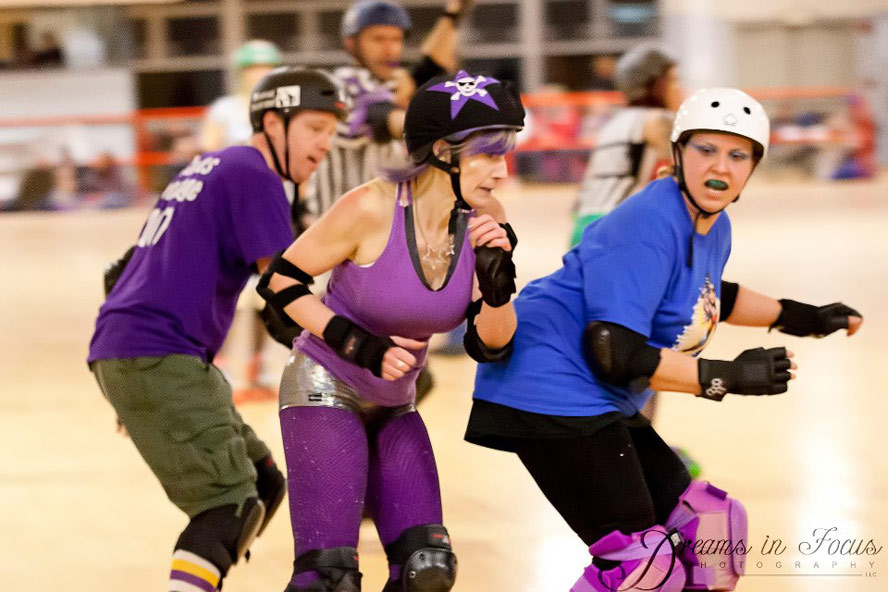 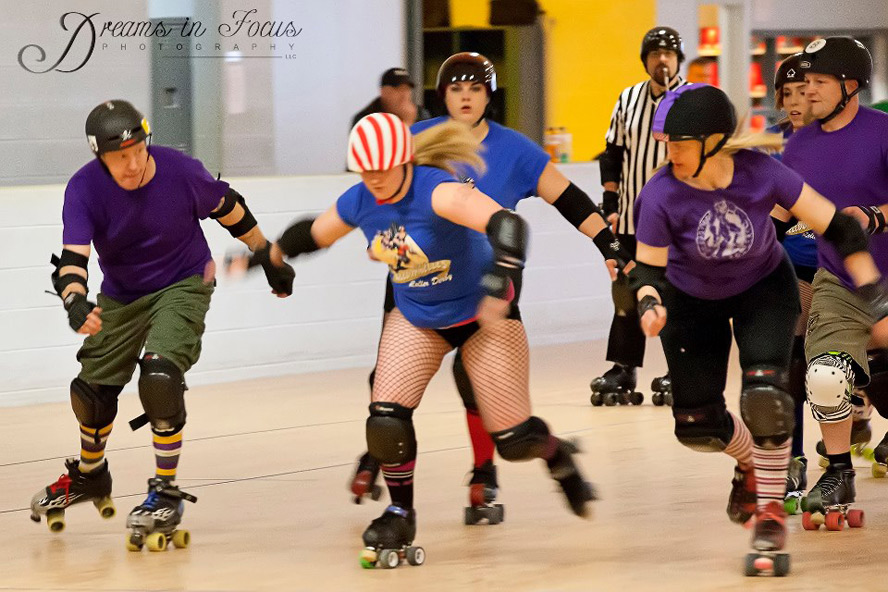 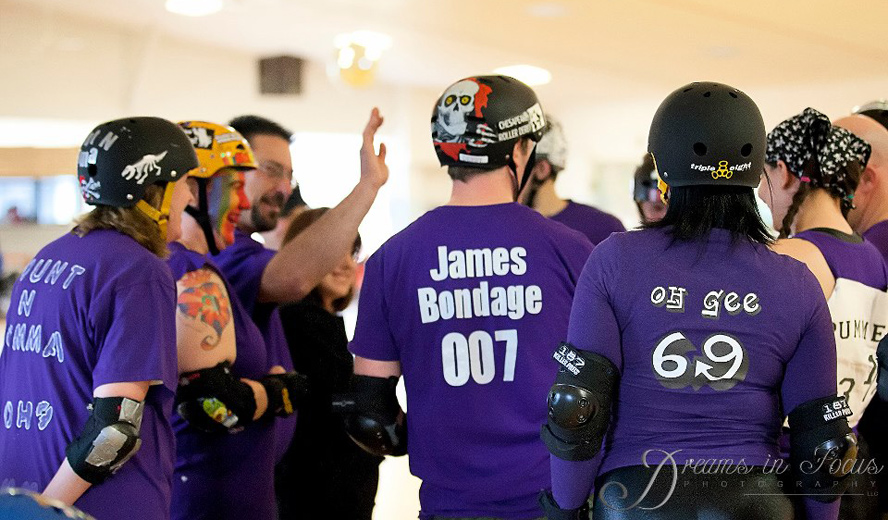 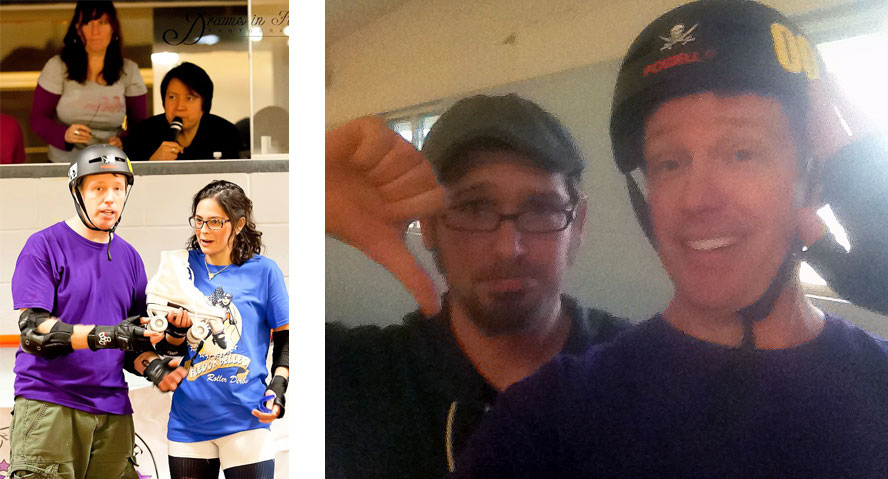 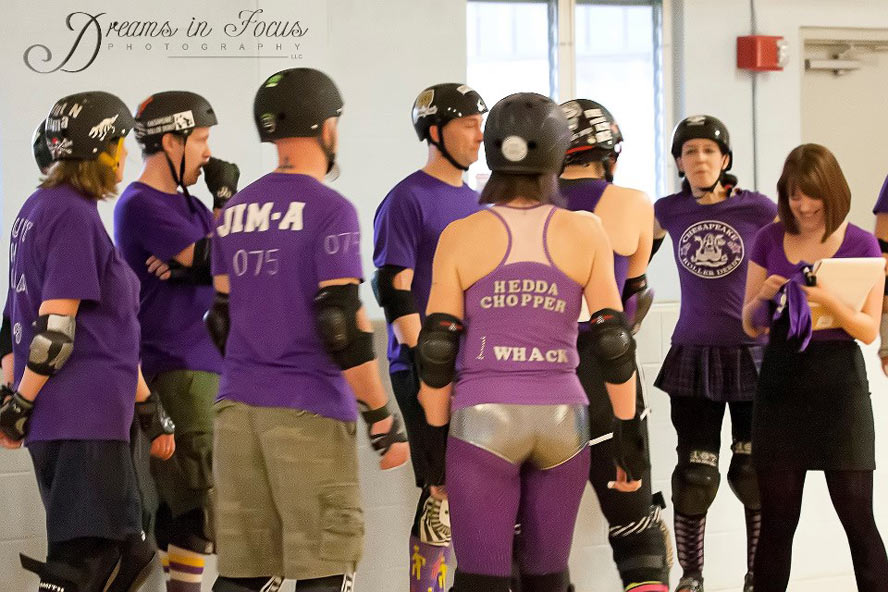 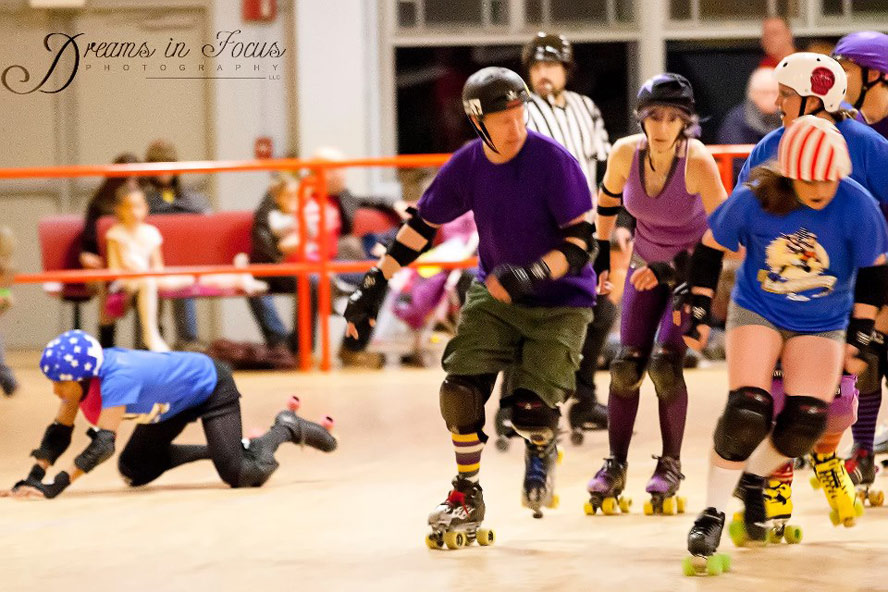 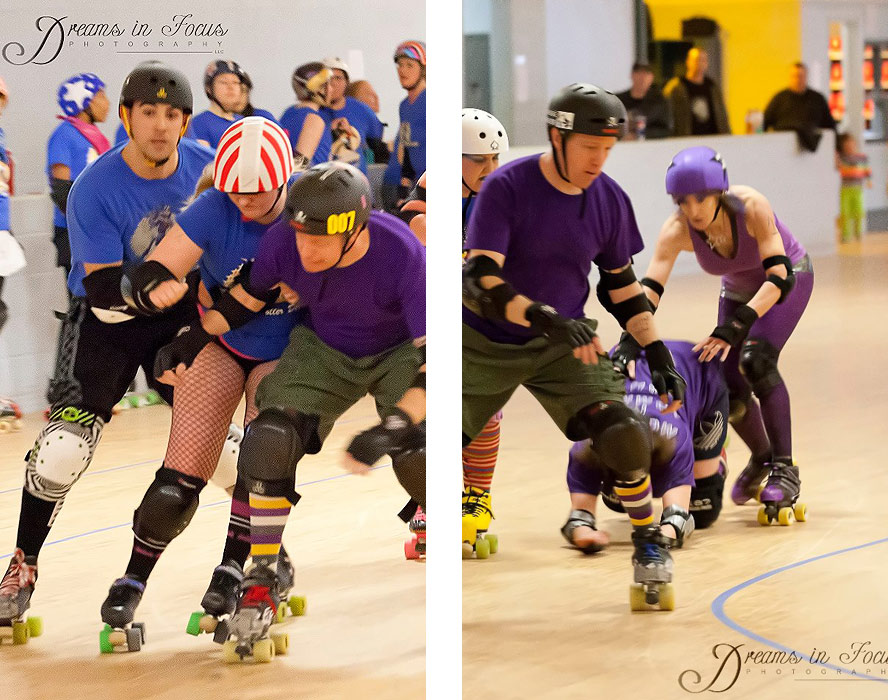 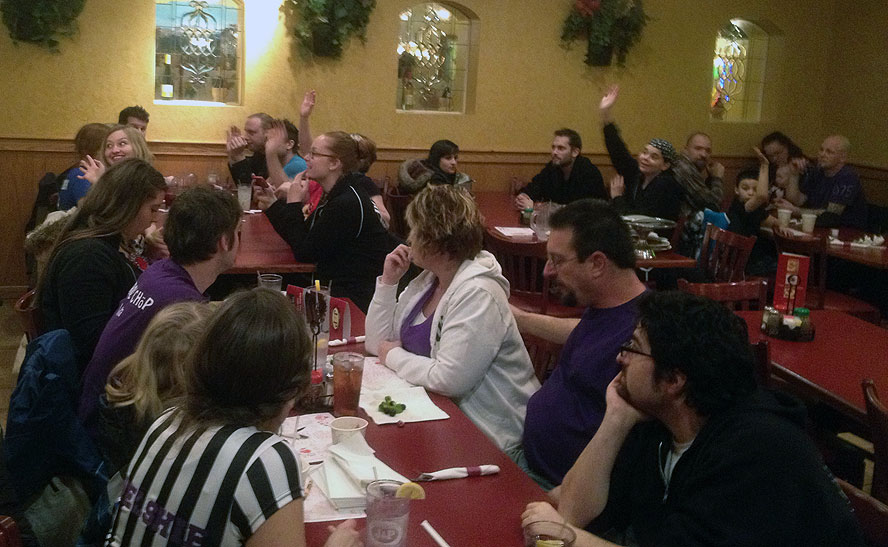 During the pre-game huddle, the league presented me with a gift certificate for new skates!  My current skates are falling apart and they knew I wouldn’t buy decent ones.  Yet, my current skates are unsafe, and I’ve grown into a decent derby player who can take advantage of “big girl skates.” I’m so touched and grateful. It’s amazing. I love these people.

I visited the Derby Star Pro Shop in Frederick, Maryland, and ordered a Riedell 265 boot and Sure Grip Avenger (Magnesium) plates. I tried on the Wickeds (below) which felt 110% better than my current skates, which are literally falling apart. 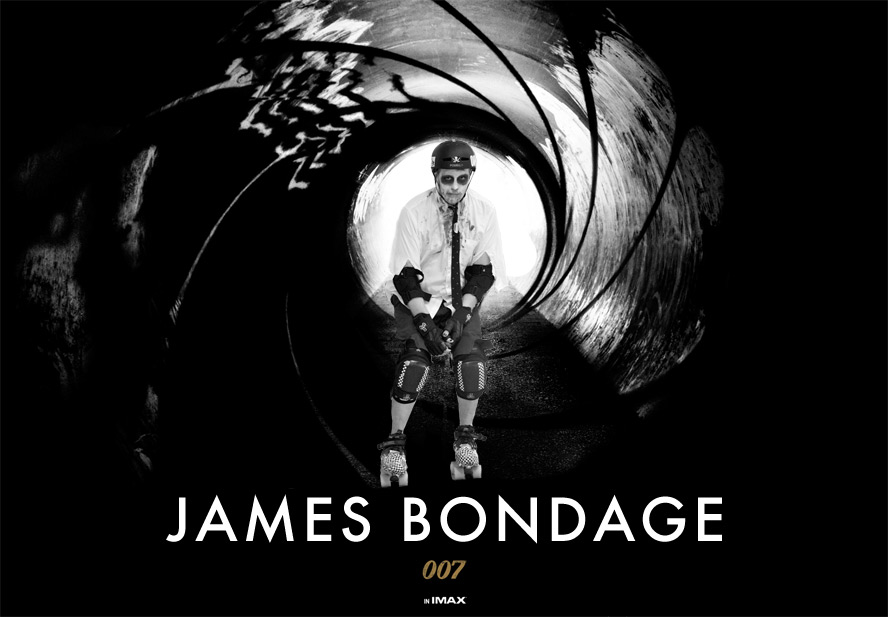 It’s been a crazy few weeks.

I learned this week that our rink is changing management. We had to cancel our Season’s Beatings game and a scrimmage with our friends the Freedom Belles, which is unfortunate (and could have been avoided). I’m extremely optimistic about the new management and the future of the rink. We all have our fingers crossed. It’s been such a huge year for this league, with so many changes, that I’m grateful we’ve stuck together and kept it going. The stresses of these past few weeks have highlighted just how important derby is to me right now, and how important these folks are in my life.

Our last game (11/18/2102) was the annual “Pirates vs. Pilgrims” game, which was my very first scrimmage a year ago.  Here are some pics for posterity. Better late than never. The really good ones are from Gary Bell, Jr (Sir Pix-a-lot) with Dreams in Focus photography. 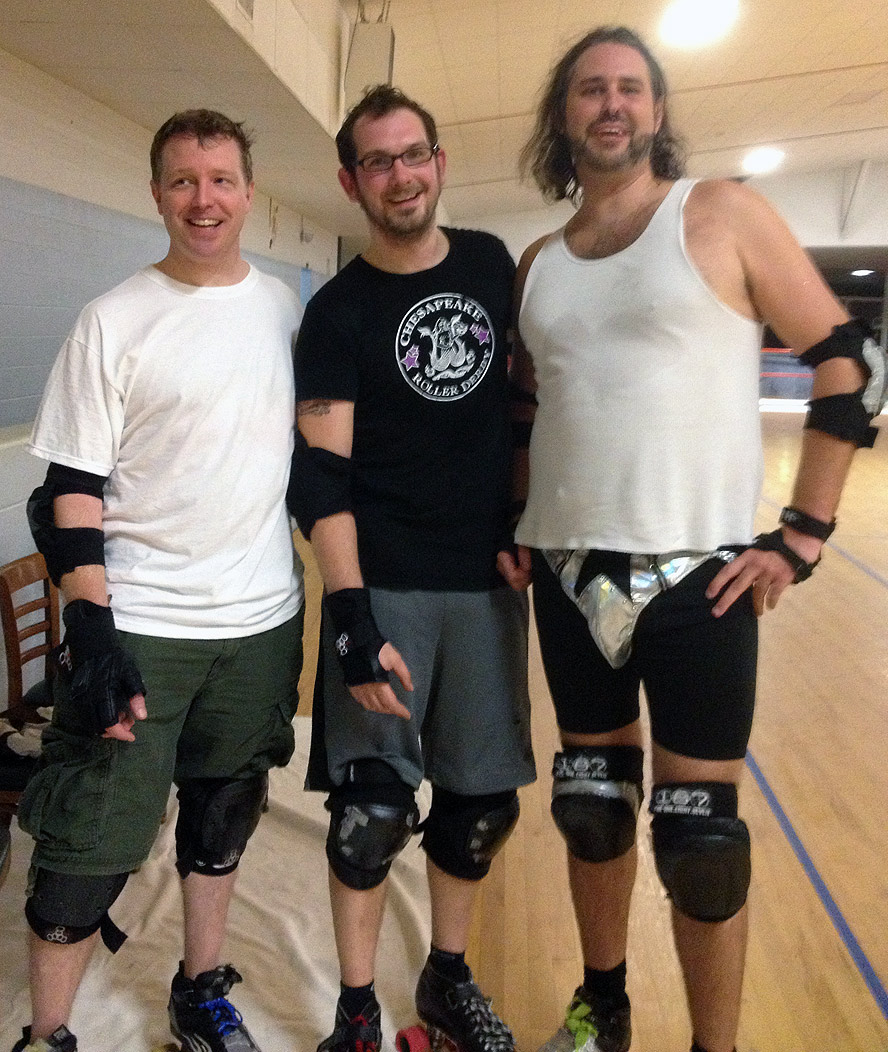 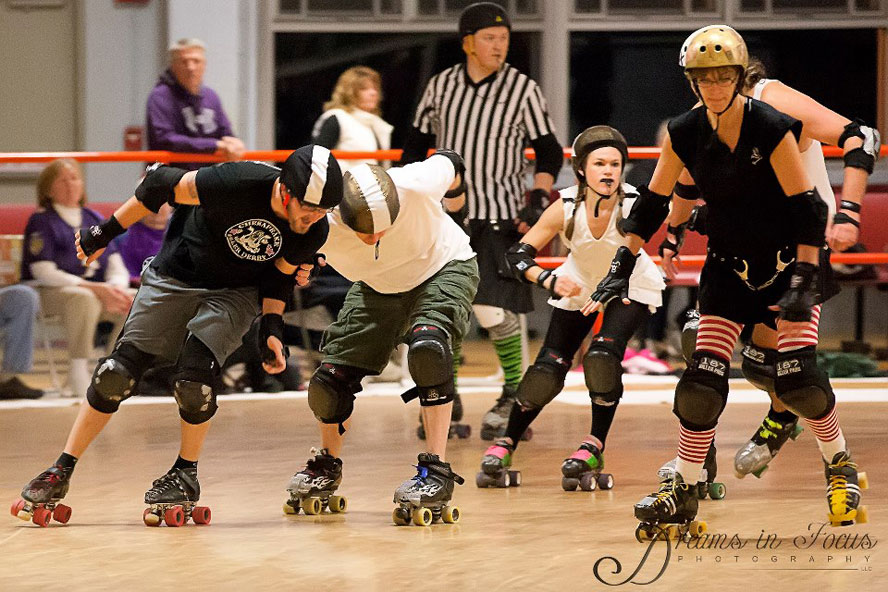 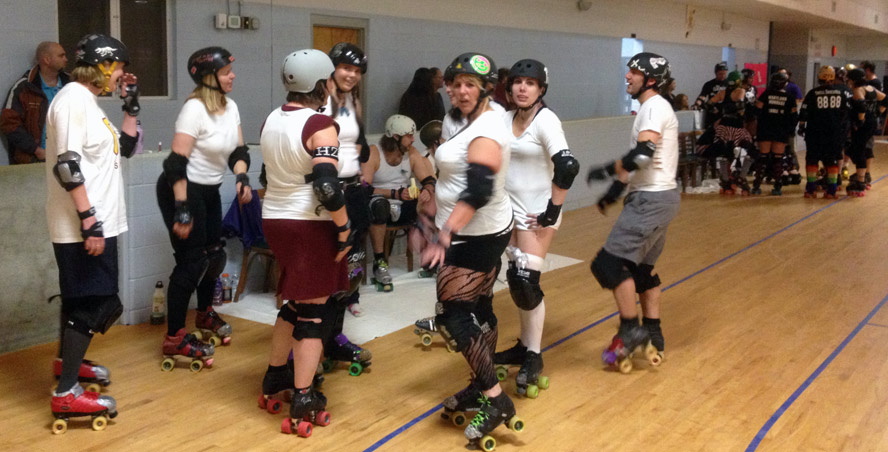 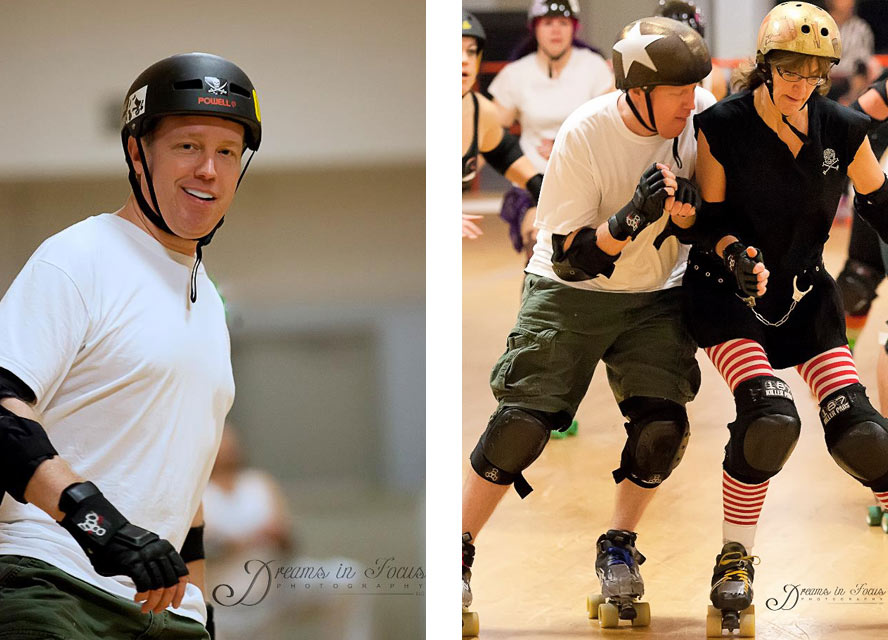 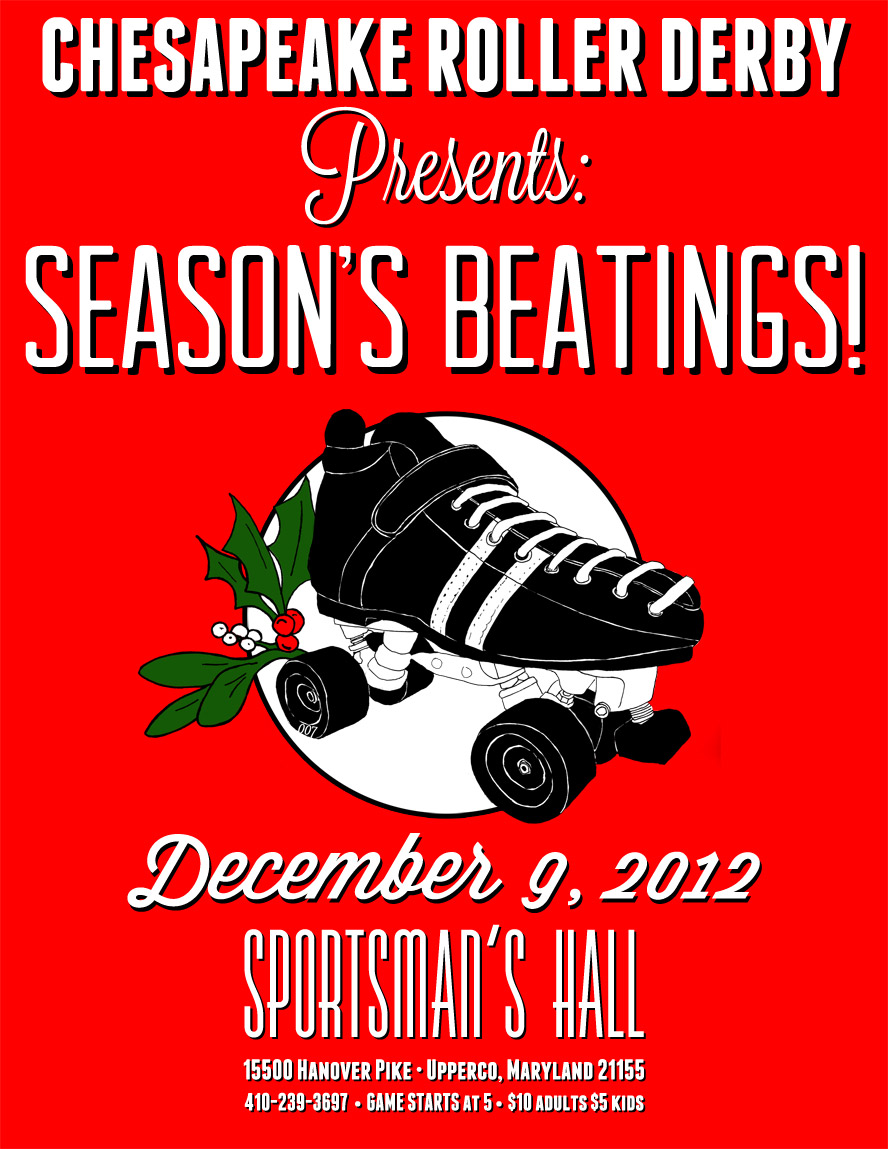