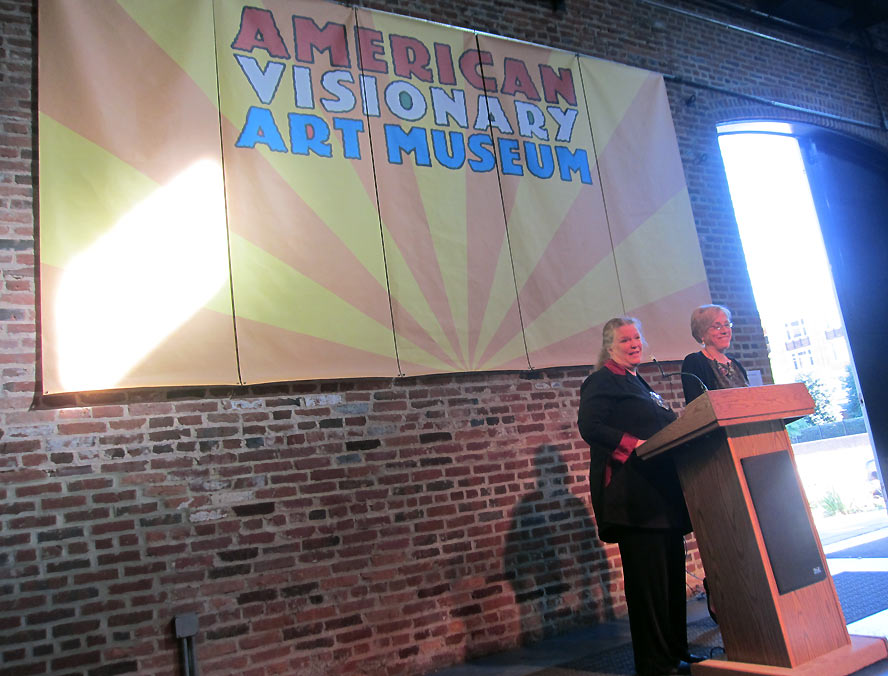 I spent the past two mornings at the American Visionary Art Museum, where I help out as a docent/volunteer. I got a preview of the new show All Things Round: Galaxies, Eyeballs and Karma which is very very very very very very very very very very wonderful. A handful of the artists came in from out of town to share insights about their work. This is a GREAT show. I am sharing a tiny bit of what I saw and learned with you here, dear reader, so that you will go see it for yourself.

Greg Mort has produced astonishing paintings (self taught, of course) which deal with the macro end of this theme – galaxies, planets and our relationship to the cosmos. Breathtaking. 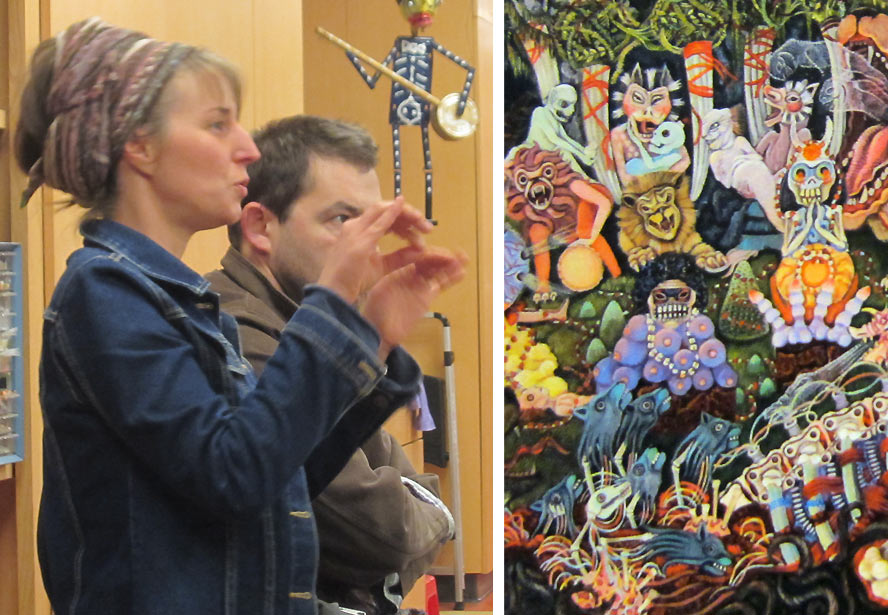 Stephanie Lucas with husband explaining her process & a tiny cropped section of her painting.

Stephanie Lucas produces extremely intuitive works which recall all the things I love about Bosch and Frida Khalo, yet is very new. Her paintings make me swoony. She and her husband, also an artist, came all the way from France for the opening.

Wendy Brackman produces paper sculpture masterpieces from paper plates, and is hilarious to boot. In a demonstration, she masterfully made a hat and a mask in under a minute each while telling her story (she gave me the skull-like mask in the middle).  On the left is a Styrofoam cup, carved by Mark Swidler, a former AT&T executive who began making things from cups in the mid 1970’s. I love both of these people’s work – recycling and using “everyday” objects to tell stories and delight.

And then, there’s Scott Weaver and his toothpick masterpiece, Rolling Through the Bay. 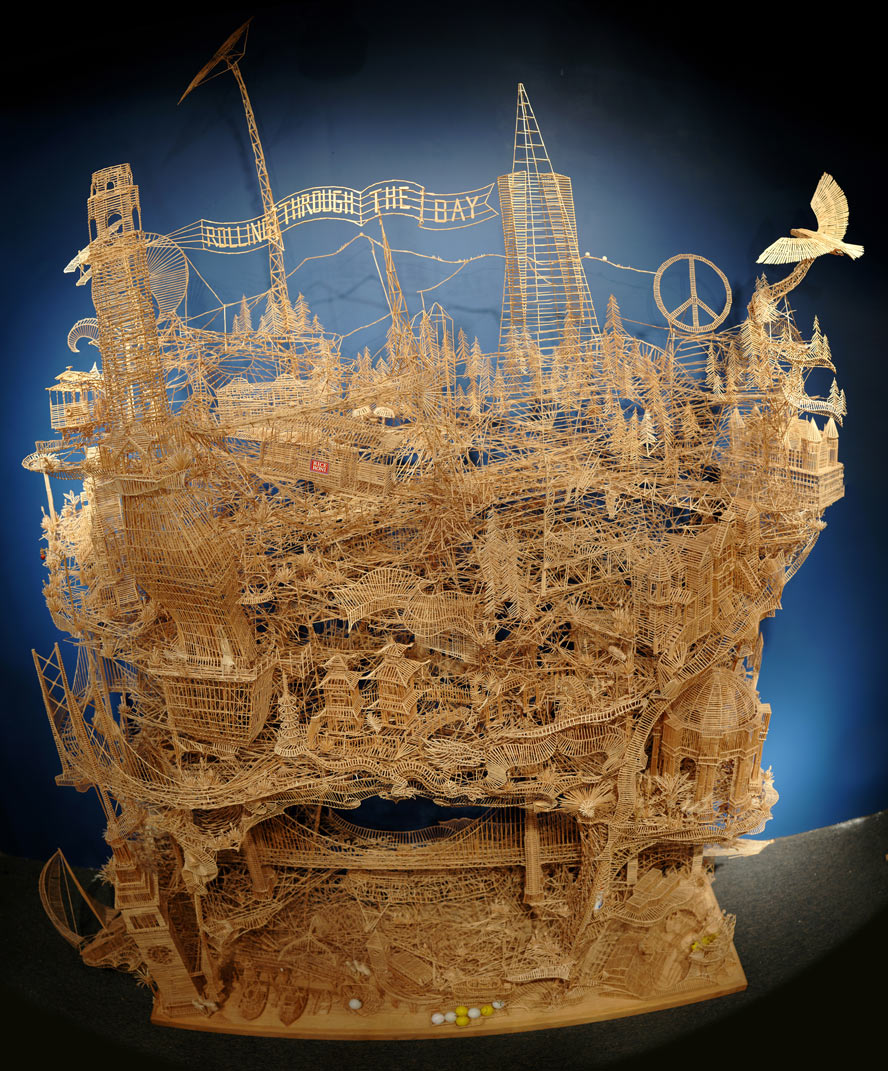 You HAVE to see this in person to believe it. My jaw dropped as he demonstrated how it works. It’s 9′ tall, 8′ wide and several feet thick. There are 10 different entrance points to insert ping-pong balls, which traverse pathways with the sculpture. They retrace paths through Mr. Weaver’s history in San Fransisco. It made me miss the city. He’s worked on this for 32 years and it’s a masterpiece. 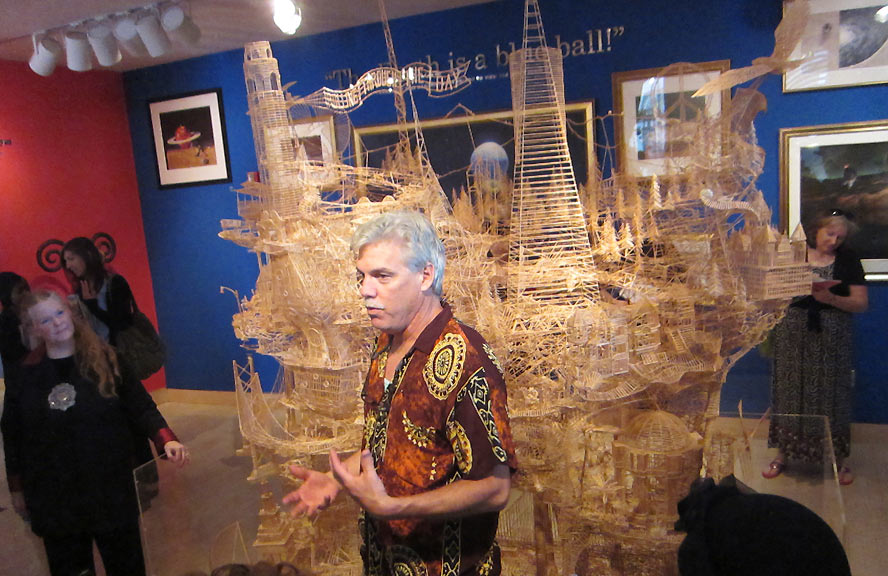 Scott has swum (swam?) from Alcatraz to San Francisco six times. He didn’t say what he was in for, though. He’s also an expert with a Frisbee and showed us some amazing tricks.  And, finally, one of my favorite parts of this piece is this: 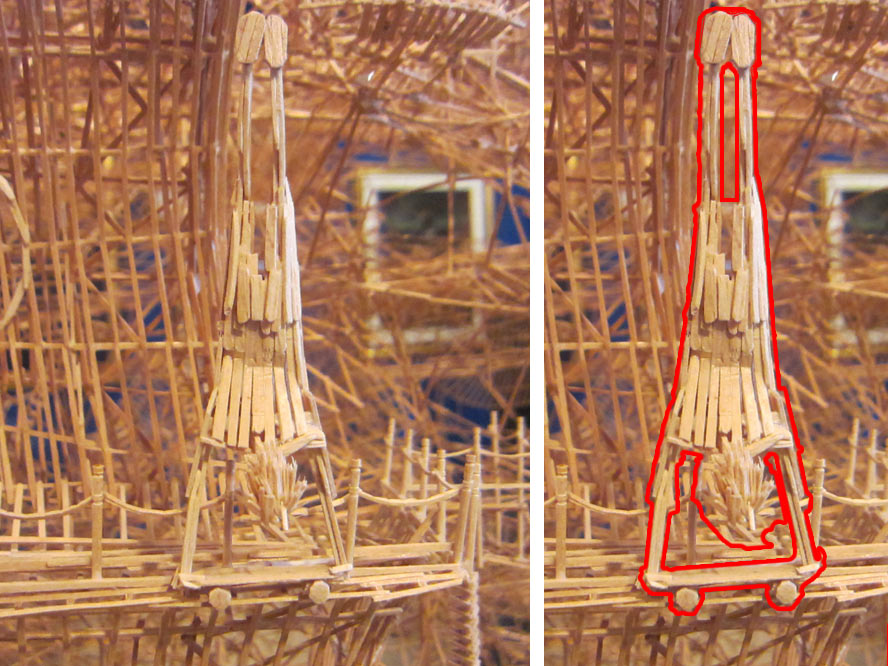 Scott put himself doing a handstand on a skateboard in here – a feat he can still do to this day. We talked about skating – he’s made his own boards out of railroad planks and stuff – so awesome. He’s a super nice guy.

There’s so much more to this exhibit – I haven’t talked about J.J. Cromer or Deepak Chowdhury, who both make very strong impressions in the show, or the dozens of other artists in here.  Please go see this show. There’s so much to absorb and be inspired by. It’s great and we are so lucky to have AVAM in Baltmore/Maryland/on-the-east-coast.