I’ve had The Men Who Stare At Goats from NetFlix for several weeks. 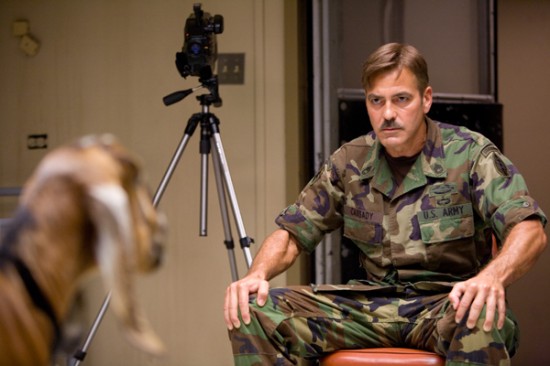 I loved this movie, with Jeff Bridges reprising his role as an aging hippie/burn-out and its metaphysical overtones. And something about it reminded me of Fear and Loathing in Las Vegas, which is currently available for online viewing from NetFlix.

FALILV  was written by Hunter S. Thompson and follows its protagonist, Raoul Duke, and his attorney, Dr. Gonzo, as they descend on Las Vegas to chase the American Dream through a drug-induced haze. TMWSAG is based on a book by Jon Ronson about  research conducted by John Sergeant, who looked at the U.S. Army’s exploration of New Age concepts and the potential military applications of the paranormal.

There is nothing in the world more helpless and irresponsible and depraved than a man in the depths of an ether binge, and I knew we’d get into that rotten stuff pretty soon.

Fear and Loathing was directed by Terry Gilliam and features a who’s who of a cast, including Flea, Michael Jeter (Mr. Noodle on Sesame Street), Lyle Lovett, Christina Ricci, Gary Busey and of course, a bald Johnny Depp.

There are more parallels, and both movies are extremely funny. This double feature will be playing at the Summer of Love drive-in at the Barn all season.

Let’s get down to brass tacks. How much for the ape?