It’s October in Baltimore. The leaves are changing colors (because they are dead) and blowing away in crisp chilly winds. The sky is getting dark earlier and everyone’s thoughts are turning to one thing: monsters. I am no different and thought I’d share some useful monster facts with you.

Monsters have been a vital part of every major iteration of civilization. While most people believe that the Tyrannosaurus Rex was the first monster to roam our planet, this isn’t actually true. Sharks were the first monsters, and sharks evolved into t-rexes (see figure 1). This is obvious from their dental plates (see figure 2). 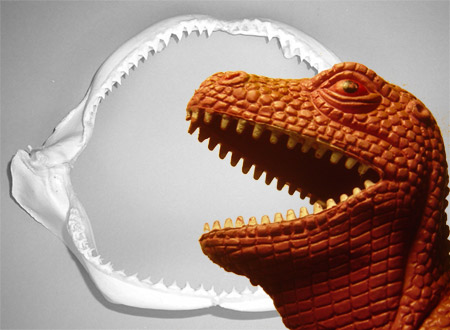 In order for something to be considered a monster, it must meet the following criteria:

The best way to survive a monster attack is to not let the monster see you. As monsters typically do not get involved with basements, it is optimal to be in a concrete, windowless basement corridor until the attack has passed.

In the event that a monster has seen you, the widely accepted best practice is to run away from the monster screaming and waving your arms. If enough people do this, the monster will become confused and frustrated and will move to another urban area. Monsters are drawn to urban areas primarily for a healthy supply of crunchy buses and trains. Noisy panic and mayhem are understandably distracting.

Monster attacks declined considerably with the advent of influenza vaccine. Medical professionals have drastically reduced to use of radiation to treat the flu, and there is a direct correlation between the decline crunchy radioactive buses and trains and the monsters that attack and devour them.

Please use the comment field below to share your own monster attack stories. Have a safe and spooky Halloween.