This past Wednesday, Robert Bringhurst gave a talk at UMBC entitled  “What is Language for?” His talk touched on linguistics, art history, poetry, typography (which is what attracted me to this talk) and ornithology. 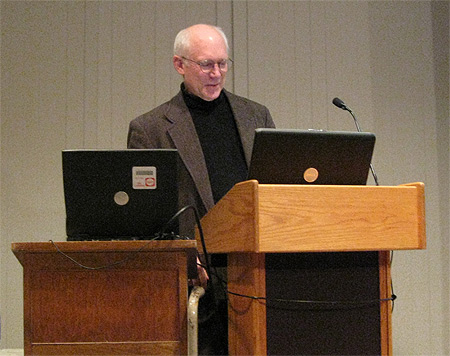 He began by explaining that, for a linguist, there’s great difficulty in understanding the origins of language because earliest written proof is only about 5,000 years old.  People, however, have been talking and singing and telling each other stories for many, many years before that.  I learned that language is an ecological phenomenon – there is a relationship between it and its environment – and languages are living things. They can grow, shrink, adapt, remember and die.

Edward Sapir proved that sign language is a fully qualified language.  Apparently, before he came along, linguists had some doubt about this because of the missing phonetic component (lingua).  Language insists on being among humans, even if they are unable to speak or hear.  And what of that? Does language exist for other species than human beings?

Mr. Bringhurst then put on his ornithologist’s hat and walked the audience through a diverse sampling of bird song and bird calls. For me, the most interesting was that of the raven – raven’s can’t sing, they call. They mate for life and make friends with other ravens. And when they meet in groups, they develop calls that they use in those groups. And here’s the amazing thing – if a raven is looking for his friend, he will use one of the calls that they use together – if the other raven is in earshot – he will come. It would seem that ravens give each other names.

So, what is language for? Applying meaning. What is meaning for? Meaning is for itself.  The stories, however, are for us.