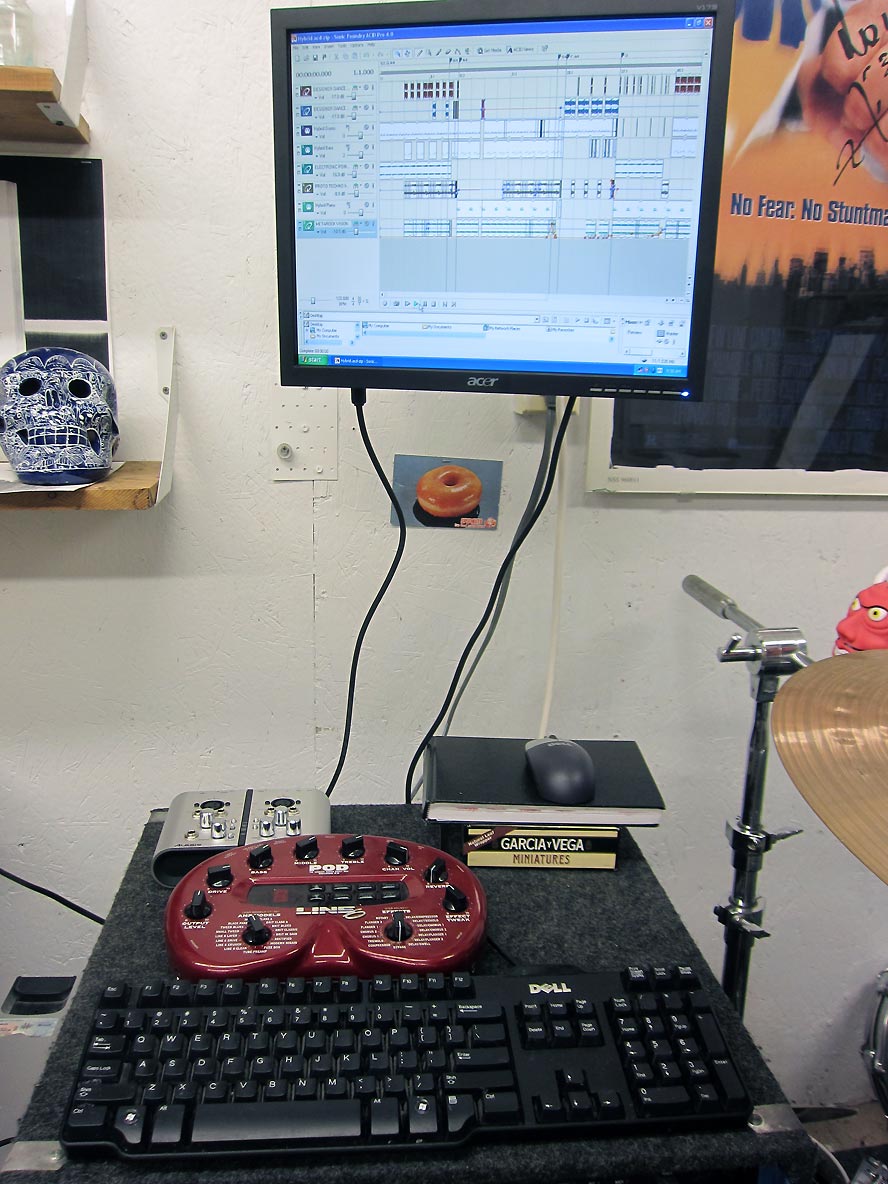 I recently had to reinstall Windows on most of my computers. While I was at it, I turned my old Dell desktop into a dedicated audio workstation. It’s isolated from the Internet, which means it is secure, distraction free and only contains recording software. It also means that it’s ready to record at a moment’s notice.  I’m excited!

I began recording stuff in high school with my brother, Loco. In college, I bought a used Ross 4-track from our pal Will. Will’s dad worked making software for Yamaha or somewhere and they had a nice tape 8-track studio in their basement. We were very fortunate to have access to all this stuff, including video recording equipment. I learned  great deal about music, recording and composition – a fine thing to have at a young age.

The discovery of DIY Punk Rock in high school offered freedom from the unreachable production values of Rush, Iron Maiden, etc. and even the brain numbing MTV. During my senior year in high school, it occurred to me that Hondo guitars and Peavy amps were good enough – if you had a mic and tape recorder, you could make something. One could even run a tape label out of a high school locker.

Tim Cookson gave me a mix tape of punk music (which he got from his brother,  J Cookson) that had “Lady Sniff” by the Butthole Surfers, and that song made a huge impression on me. Again, very freeing. I didn’t see it as a gag song, although, I can see how it could make you gag. It got me thinking about noise and rhythm what music can be about. Tim and I recorded the song “Whisker Biscuit” as our two man band, The Infected, in my basement and kitchen the summer before we left for college, and Lady Sniff’s influence can be heard in that song.

Eventually, I’d compost Ornette Coleman, the Amphetamine Reptile bands, Captain Beefheart, Curlew and the crazy shit that comes out of the Knitting Factory in NYC in my brain, along with what I learned about composition in college.

After graduating from college, I had had access to several used record stores and an endless supply of used recorded material. As such, I was able to fund and complete my first real studio, the Dead Chicken Ranch, which lived in the basement of my row home in Hampden, Baltimore. 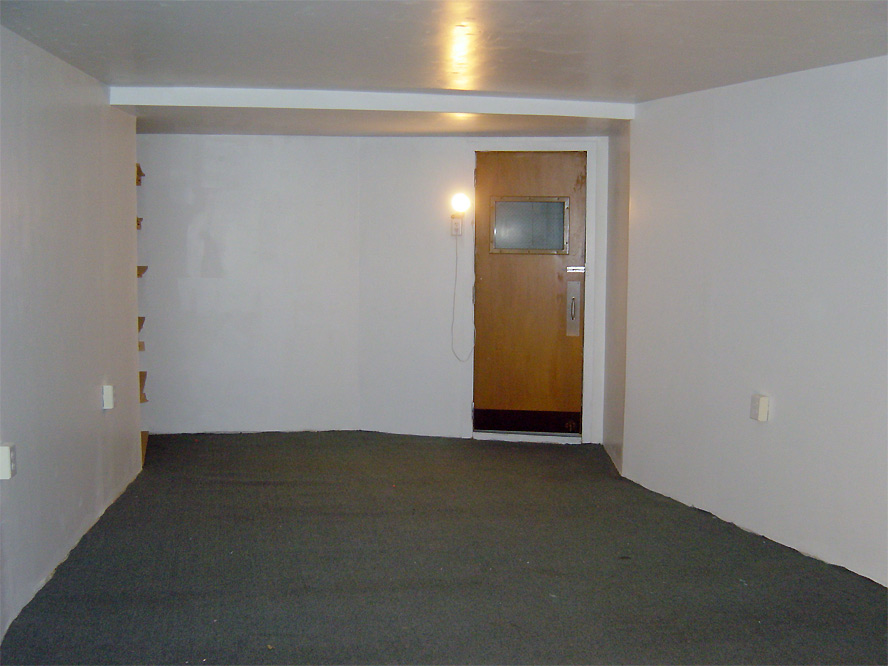 This room was amazing – none of the walls were parallel to each other in order to reduce standing wave forms, and none of the walls touched the existing structure of the house, which made it virtually soundproof to the neighbors. It was a great space. Yet, if I had it to do all again, I would have made the room half the original size, as this took up most of the basement. I also would have spent more time tuning the room instead of making it completely dry with Sonex™. I recorded several records in this room, some of which were released commercially. My favorite is Pet My Kitty, Mr. New York City by Diana Froley (Skoda Records, 1998).

Which brings me to the point of this post – what started out as a tidy Alesis ADAT studio 18 years ago has become a mash-up of handheld recorders, cheap software and miscellaneous effects processors rack mounted on a wheeled bread dolly that I found in a parking lot. The wall mounted monitor lets me view the screen from behind the drums or any corner of the room. It’s all very mobile and easy to use. 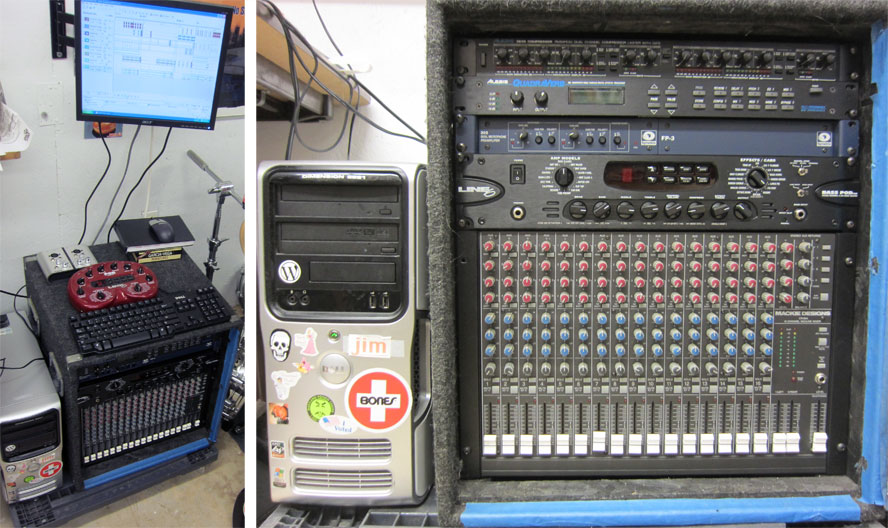 I think that one of the best records ever made is Tom Waits’ Bone Machine. I consider this to be a perfect record. The songs are wonderful, and it likes to be heard as an album. But there’s also a story about this recording, where they set out in a fancy studio and just couldn’t capture the spirit of the songs. So, they moved the stuff into the boiler room and SNAP! it all clicked into place. This collection of parts feels like that to me.

I have an appreciation for low-fi production, and what appeals to me might not work for the next home studio enthusiast. I’m just so happy to have these parts reassembled.  My plan is to start posting new music here on this site, in whatever form the songs end up taking. As with previous sketch projects, there’s never enough time to complete everything and I’m going to try applying my working principle to this:  “record quickly, post often.”  Hope it works!