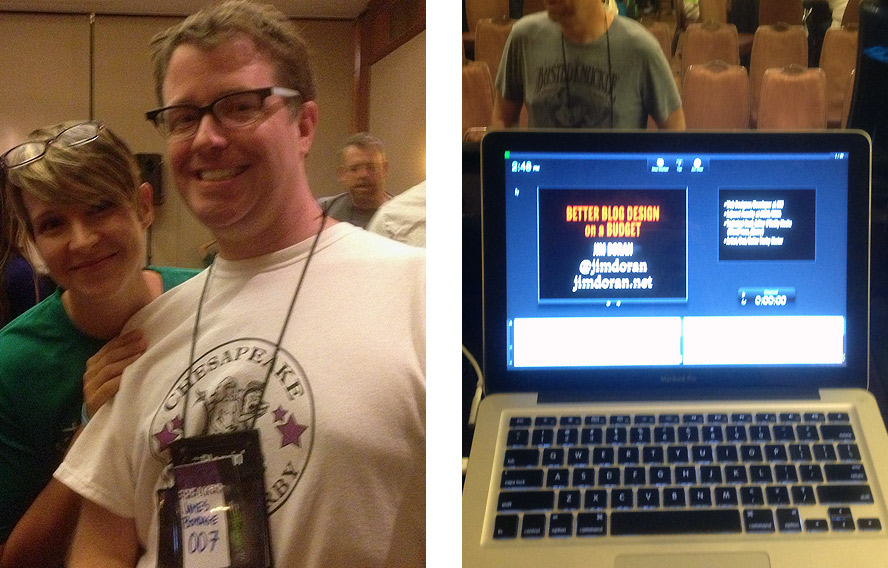 Saturday, I went back to the Hyatt in the Inner Harbor of Baltimore and spoke on blog design [slides] at FitBloggin – how to find/hire someone if you need help or how to do it yourself.

I love seeing how FitBloggin has evolved, and seeing my new old friends from around the country. It was a great conference, as always. 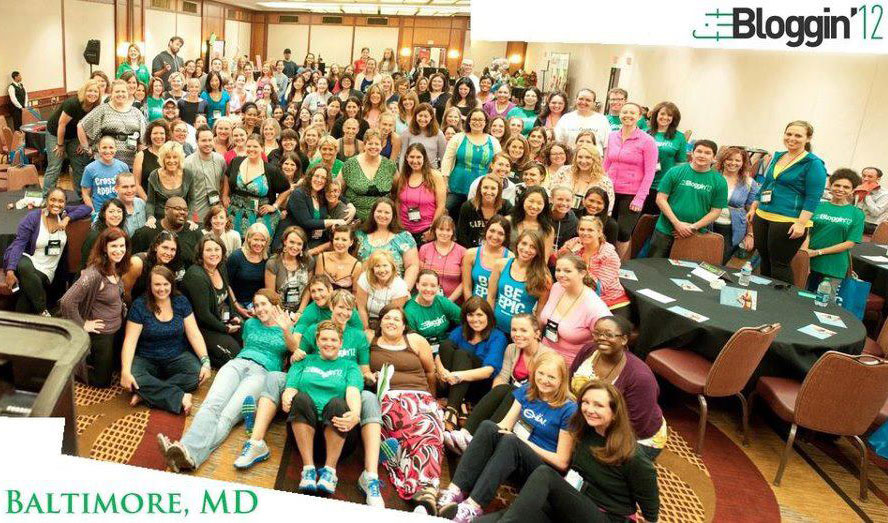 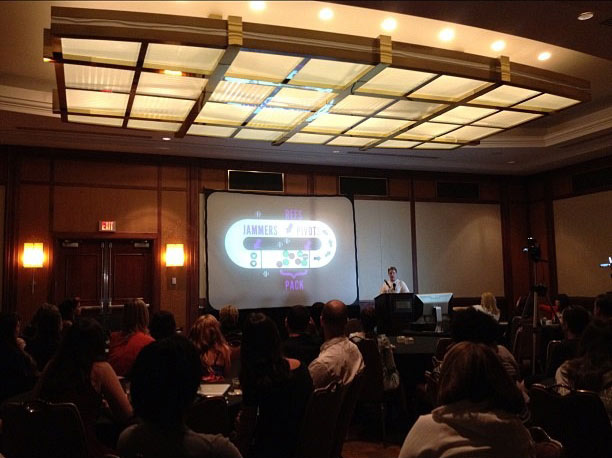 I gave an Ignite talk Friday night at Fitbloggin called Derby Little Secrets [slides]. I was surprised at how emotional it was. I think some new derby boys and girls were born that night – I hope so, anyway.

I talked about my girls discovered roller derby. We reached out to several local leagues seeking junior league information. My big girl got sick and Chesapeake Roller Derby visited us. Leezle and I attended a few games and I wondered, secretly, if I could learn to play roller derby. I bought some gear, figured out who my alter ego is and jumped in. I learned the rules, some basic workouts and key derby skills. It’s the most fun I’ve had in years – even for a guy with a trick knee. I’ve learned that moms, dads, PhDs, teachers, retail clerks, dental hygienists, florists, gay people, straight people, transgender people, black people, white people, atheists,  believers – everyone can do this. It’s open to all who want to be involved. 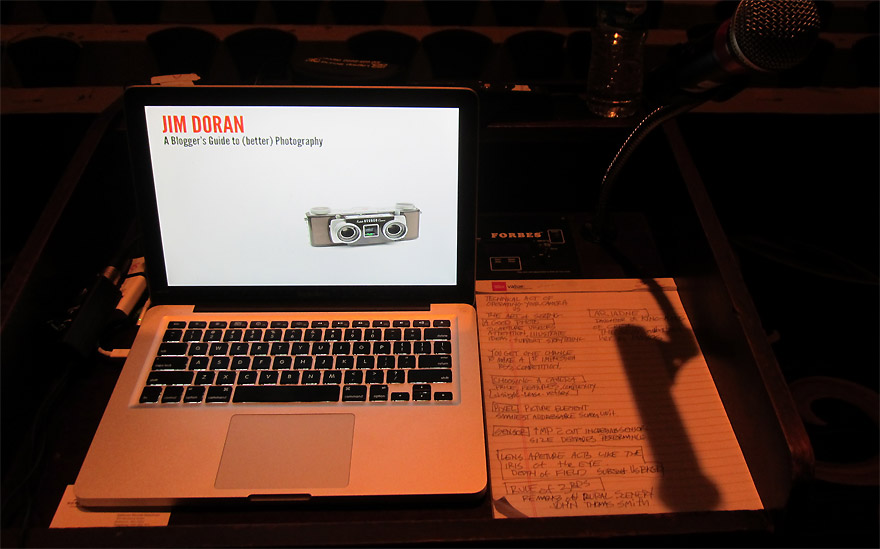 I haven’t posted anything in weeks because I’ve been reworking this site and writing a talk for the FitBloggin’ 2011 conference in Baltimore.

I still have a pretty good list of things to clean up here, especially on the WordPress side of the site.  I experimented with Custom Post Types and multisite functionality, and finally decided it was overkill. I decided to let ‘er rip, because I need to get back to posting stuff. So, please pardon the site hiccups as they happen. I’m still working on it.

FitBloggin’ was amazing, yet again. Seeing friends from last year, and finally meeting guys I’ve been talking with on Twitter was fantastic. As before, I’m honored to have been a part of this. Roni Noone has created something truly special that changes people’s lives. That’s amazing. This is my favorite conference, even more than the WordCamps.

Jennette Fulda gave a comprehensive talk on design. Monica Olivas answered questions about privacy and getting started to newer bloggers. Katy was everywhere I looked. The hookers from Shrinking Jeans are always fun! It was great to catch up with Scott Stawarz and wife, Paolo, Matt Dustin, Jen “in real life,” Jack Sh*t (even more charming in real life) and especially Ryan “No More Bacon” Sullivan and his wife, Mrs. Bacon. And everyone else I met, too. It’s all overwhelming. Check the #fitbloggin hash tag on twitter and you can see what I mean.

Regarding my presence there, someone asked me “are you a vendor of sorts?” I am not. Nor am I a fitness blogger, although I did just join a gym for the first time ever and I like it, obsessively so. To date, I haven’t tried to “monetize” my site(s). I haven’t run adwords campaigns, as easy as that would be to do. I am not a “social media guru” with “the answers for driving the conversation in the community to maximize value in the douche-bag space.” I have a lot of knowledge to share, though – WordPress, Blogger, analytics, SEO, code, design, writing, being part of something positive. It’s fun to help and I answered as many WordPress and blogging questions as I could.

This time, my talk focused on photography for blogs. I decided to address “the art of seeing” and how to get better shots. It was a fun talk to research. I recommended doing a 365 – a photoblog where you post a picture a day – as a way to change the way we see the world around us. It trains our eye and forces us to find interesting ways to tell stories in a new way. I thought I’d try it, too – I’ve created a new section on this site for daily snaps (was at jimdoran.net/snaps). Hence to mad rush to rework my dusty old theme.

My slides are here. Thanks to everyone who listened and asked questions!

I’ve been to a lot of conferences. Some were organized on shoe string budgets, like a WordCamp for Education held in the back room of a community college, and some were expensive, fancy gatherings, like An Event Apart.  When a conference succeeds, it energizes, educates and unites its participants.

FitBloggin’ was every bit as as nice as An Event Apart, and more intimate. Held at the Marriott in Fells Point, Baltimore,  everything felt just right. Baltimore was lovely and on its best behavior, which let the attendees and sponsors focus on the work at hand. 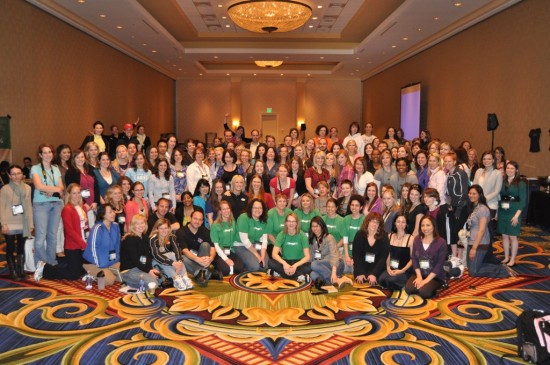 A lot of other people are discussing the amazing amount of swag given out (new running shoes from New Balance, the Gruve, the Weight Watchers Pedometers, etc), the wonderful food and the collegial atmosphere. Follow the #fitbloggin hash tag on twitter and check on the fitbloggin’ Web site.

Here’s my take on things… 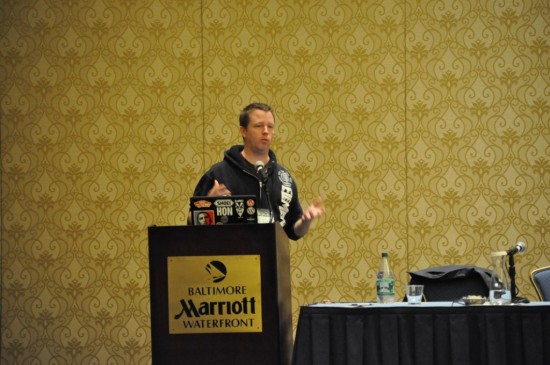 Thank you to  EVERYONE for their questions. I had hoped for a discussion more than a lecture type talk – it was good.

One of the ideas I focused on is developing one’s own Web presence. For a long time, I’ve thought about using Facebook, Flickr, Twitter, etc to draw people to my Web site. 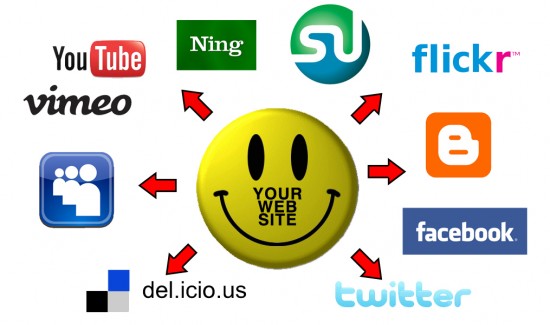 My experience has been mostly the opposite. The people who use these services tend to stay within these communities, for the most part. Which isn’t really a bad thing – but hosting my content there doesn’t always convert into traffic to THIS site.

In the early days of the Web, when AOL was a  main service provider, it acted very much like a shopping mall. You would enter their doors and be bombarded with news, chat rooms, advertising and “You’ve got mail!”. If you were lucky, you could make it out through the back door, across the parking lot and onto the Web. Facebook, Blogger and even WordPress.com are similar in that, when you use their services, you are in THEIR box. They are primarily self contained ecosystems. By placing content within their walls, we contribute to those communities – which isn’t necessarily a bad thing – but something important for bloggers to consider. Where do you really want your content to be?

I want to mention a few of the people I met and things I learned.

I spent some time talking with Jeff at POM Wonderful and learned that their Web site and social network run on WordPress (BuddyPress, in particular). His presentation on Saturday had some interesting statistics about blogging – the “Hobbyist” blogger gets about 10k visits a year, and typically blogs for just under two years. He suggested, in the fitness context of the conference, finding a “wolf pack” to support ones goals as a blogger/athlete/healthy person. I hope he posts his slides somewhere. The statistics were interesting. I liked POM, too.

Next, I hung out with Scott Stawarz (and his wife) – It was good to have someone from my own demographic present ;) .  He’s a good presenter and covered the basics of Search Engine Optimization. I hope to bump into him again.

I attended a fascinating panel called Beyond the Blog: Getting Published (with Charlie Hills, Linda Konner, Jennette Fulda, Caitlin Boyle and  Brett Blumenthal). Brett Blumenthal self published her book and generously offered advice on this experience, and it was interesting to contrast her approach against getting the many rejected book proposals that Caitlin had before getting her book out there.  There’s something about a DIY approach (whether it be for music, art or book publishing) that I find appealing. It’s certainly a lot of work – but the gap between the amount of work a self-published author and a traditional agent-to-publishing-house-author have to do is closing. Linda stressed that, in the current book market, publishers are looking for authors that have a “platform,” which is to say, have a following of some sort. They need to be willing to support the book with signings, interviews, tours and whatnot. Finally,  Jennette Fulda is delightful. I’m looking forward to reading her book(s). She’s a savvy technologist, too.

The keynote address was given by David Grotto, RD, LDN – author of 101 Optimal Life Foods. He posed the question – “If you were stranded on a  island, what 10 foods would you want to have with you?” People called out some healthy and not-so-healthy things. He made the point that we don’t need to abandon our favorite foods to be healthy – we need to ADD foods that are good for us. Simple, brilliant, easy to remember.

Finally, I attended a talk on Using Social Media to Reach Goals: The Power of an Online Community. Someone asked “How do you handle the occasional disruptive person who may infiltrate your community?”

Panelist Benjamin Teal responded this way: “There are what, 5 or 6 billion people on the planet, right? Block a couple of them.” Good point.

So, as I said, when a conference succeeds, it energizes, educates and unites its participants. Fitbloggin’ was a smashing, grand-slam of a success. It’s evident that there’s a need for this conference – I hope Roni will continue.