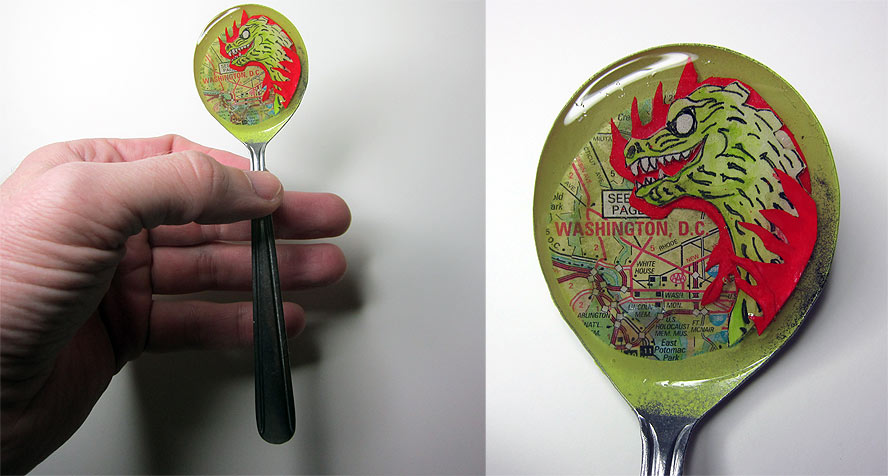 Get your own spoon full of trouble! 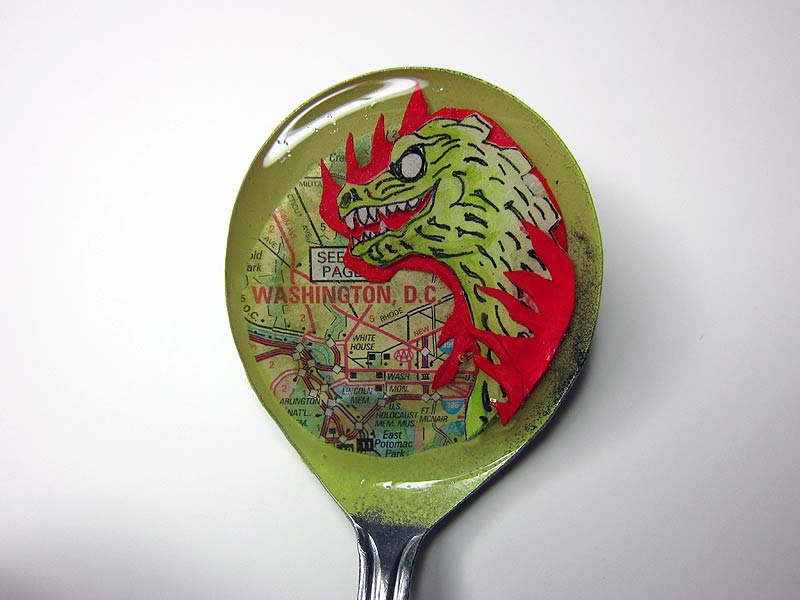 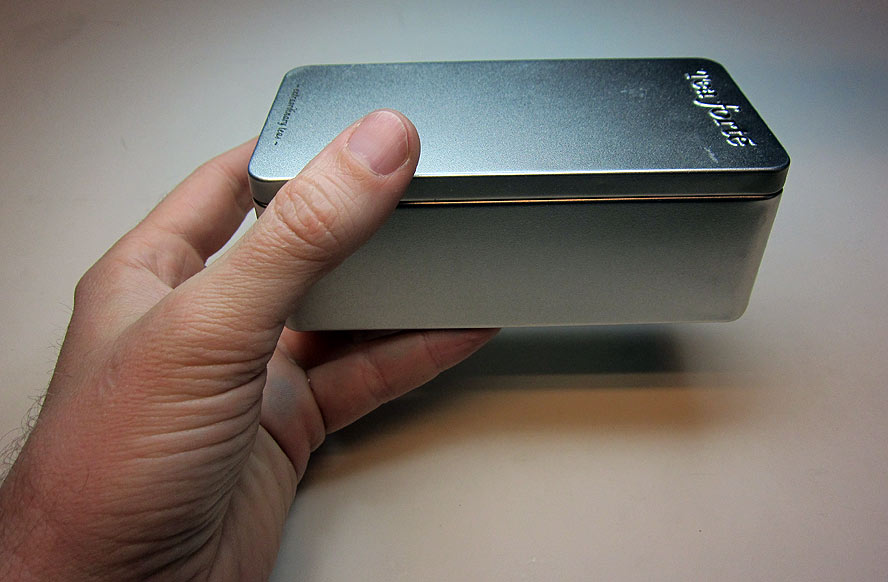 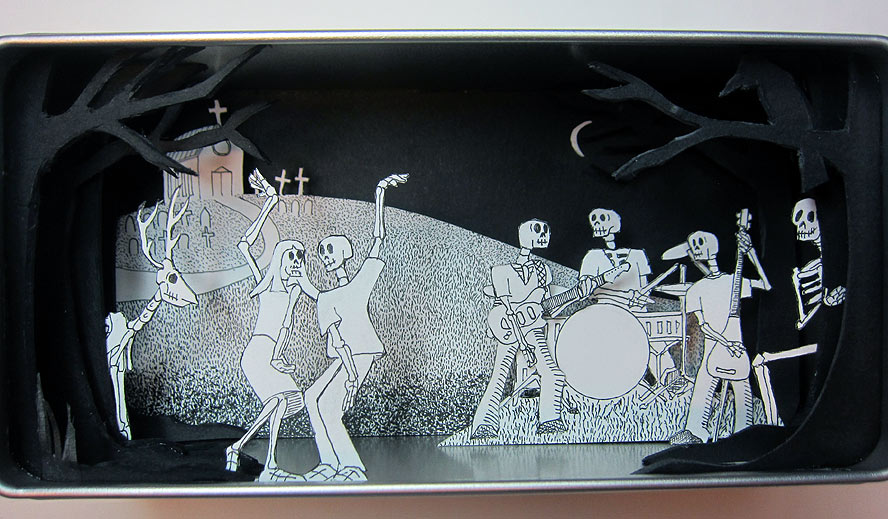 I made this for The Glimmermen, a small Irish independent music band. They just finished mastering their debut album, which was recorded in Baltimore with the help of J. Robbins.

Gavin wrote me to see if I’d be interested in working on this, explaining they have a song called “I’m Dead.”  As he wrote:

“I basically wrote it from the perspective of a dead guy and how in the end we are all just bones. The first line of the song is I’m dead flies have laid eggs in my head, their maggot brood don’t give a damn yeah what I did or what I said” its actually quite a party song and is upbeat etc. ;)” 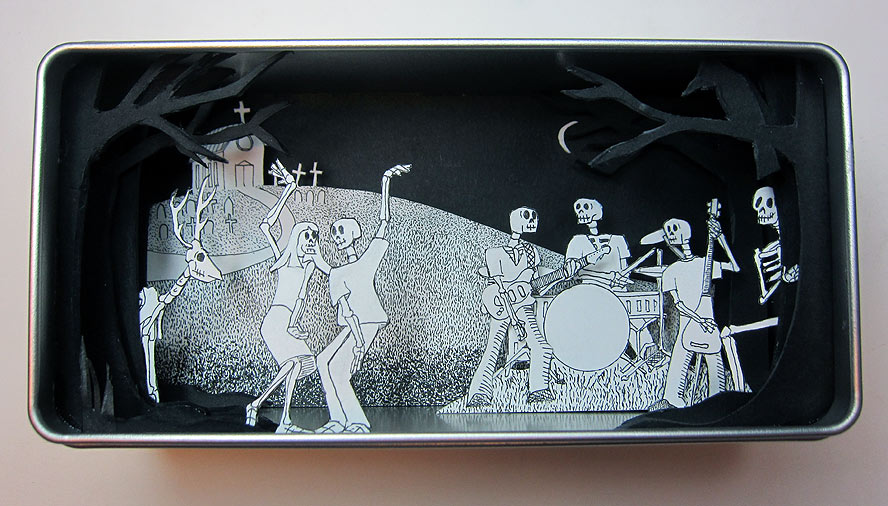 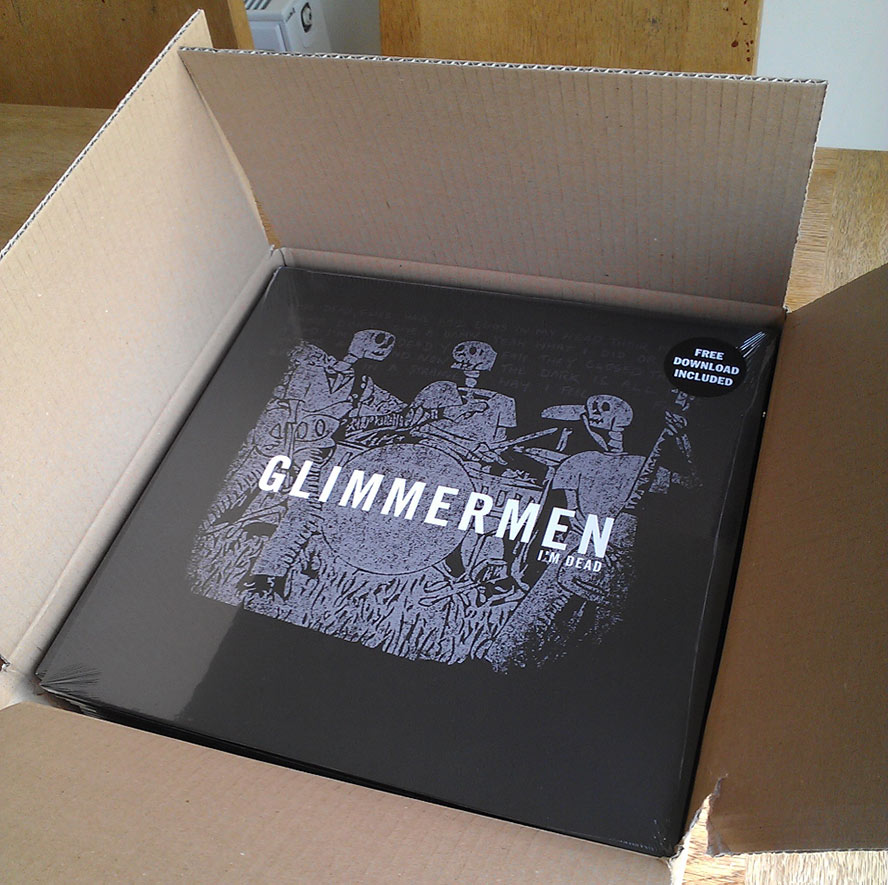 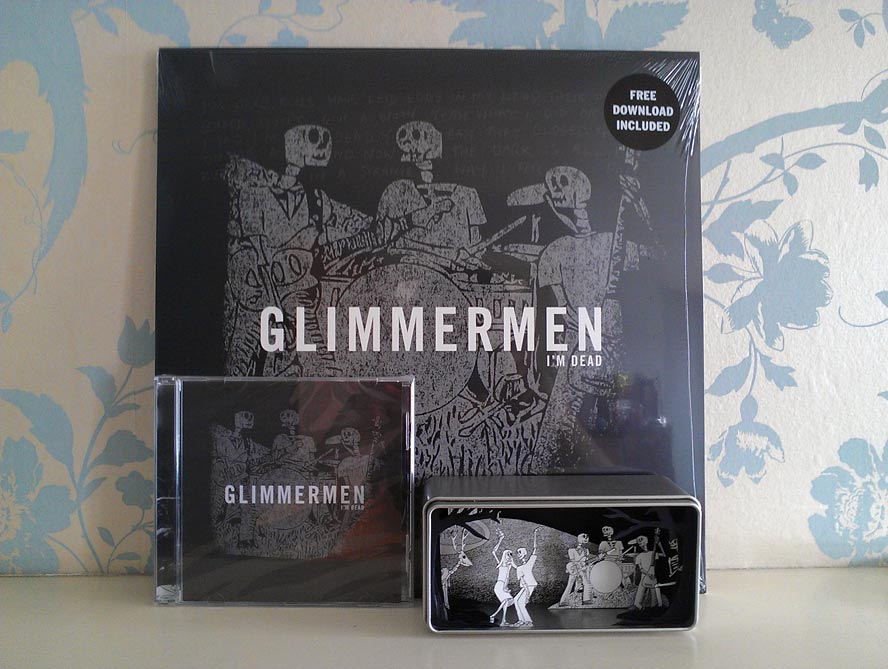 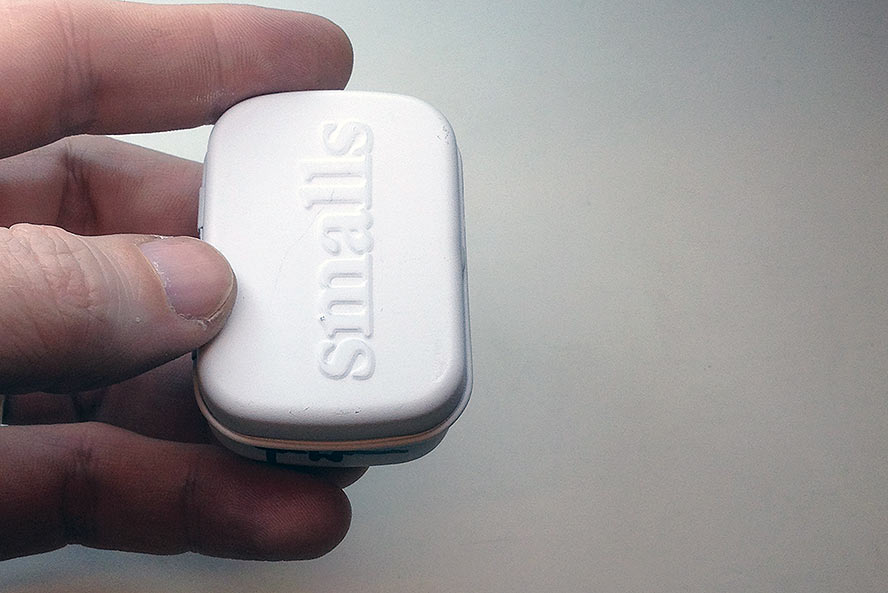 I was invited to participate in Area 405’s Sweet ‘Art 10th anniversary event. I was paired with Tyler Farenholt and the idea was that we were to collaborate or create some new art based on our interaction with each other. 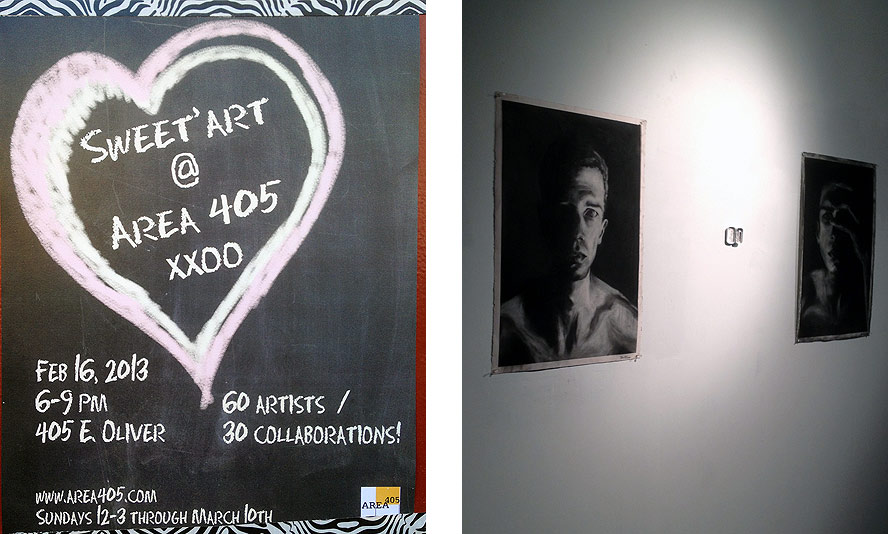 We are both busy guys, and we didn’t actually connect until the week before we were supposed to install. I realized there was no way we were going to get to know each other well enough to pull off a collaboration. Tyler was slammed with his MICA work and I am finishing a round of commissions. Tyler suggested putting in some self portraits he made (he’s very good at them). This made me think about how we present ourselves to the world in different situations.  What are the things we want to share with the new people in our lives? Or keep private? And so, I made the waiting room. 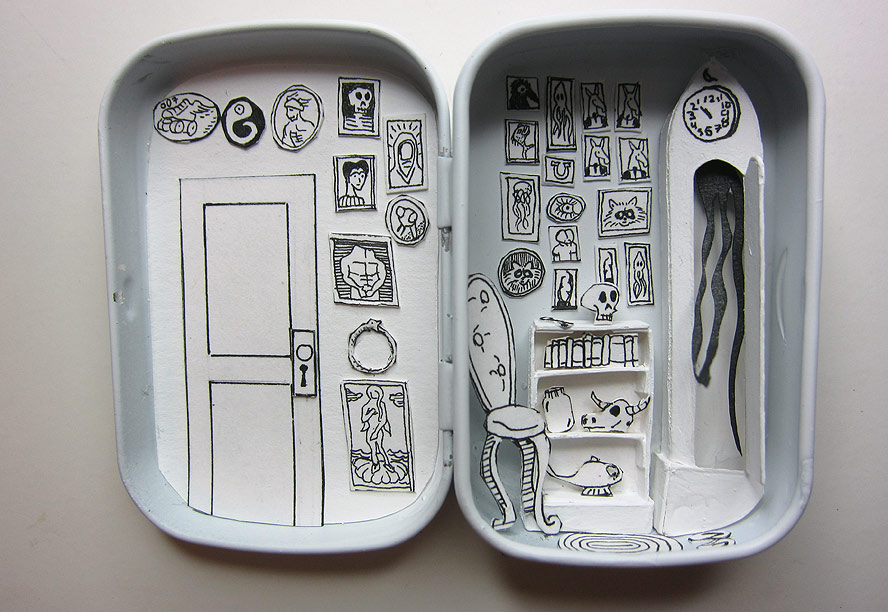 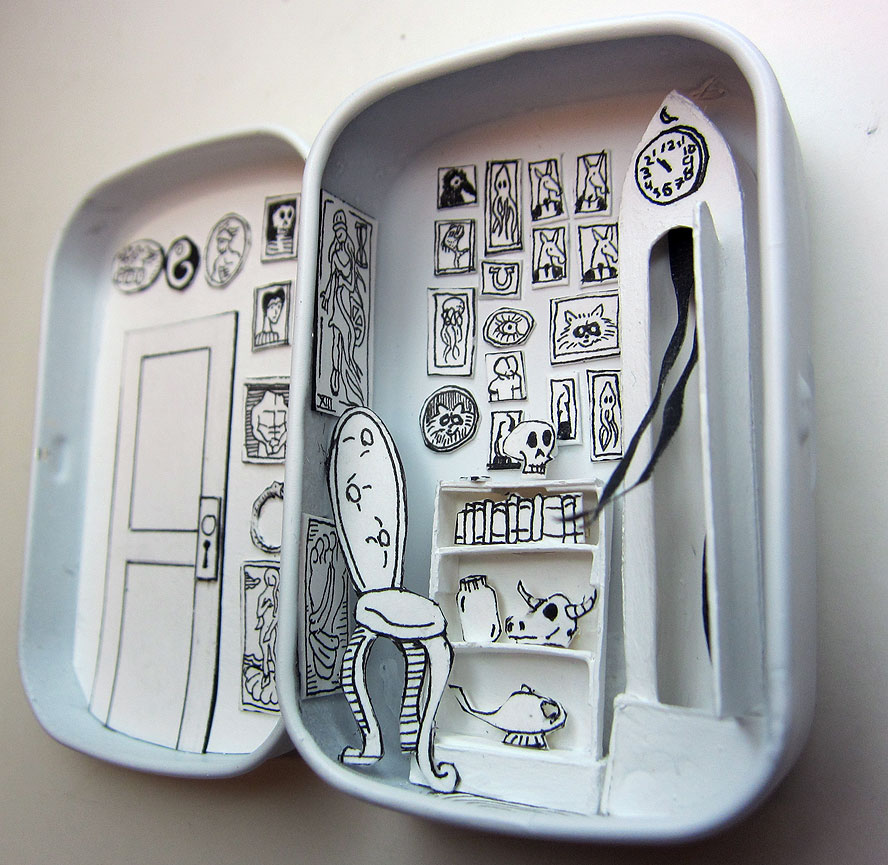 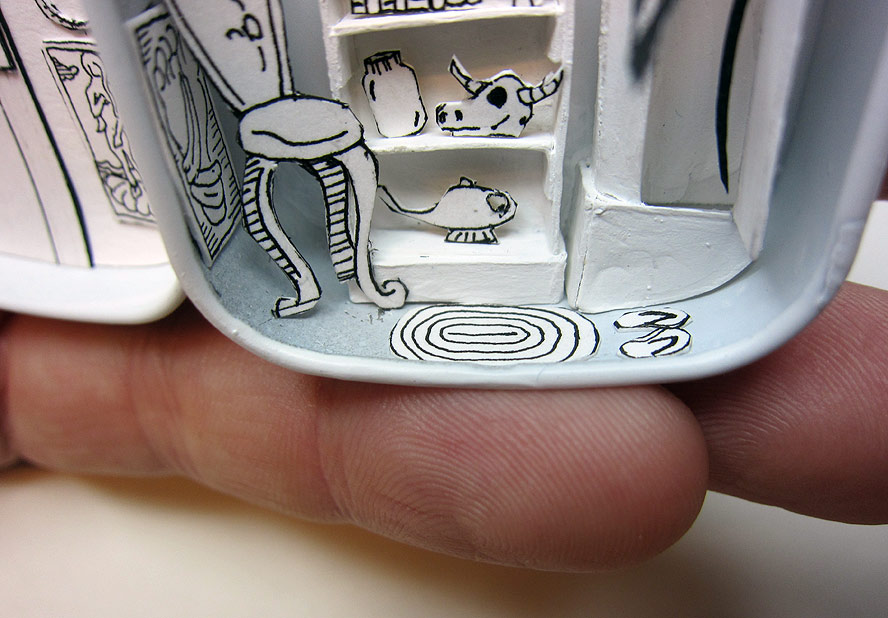 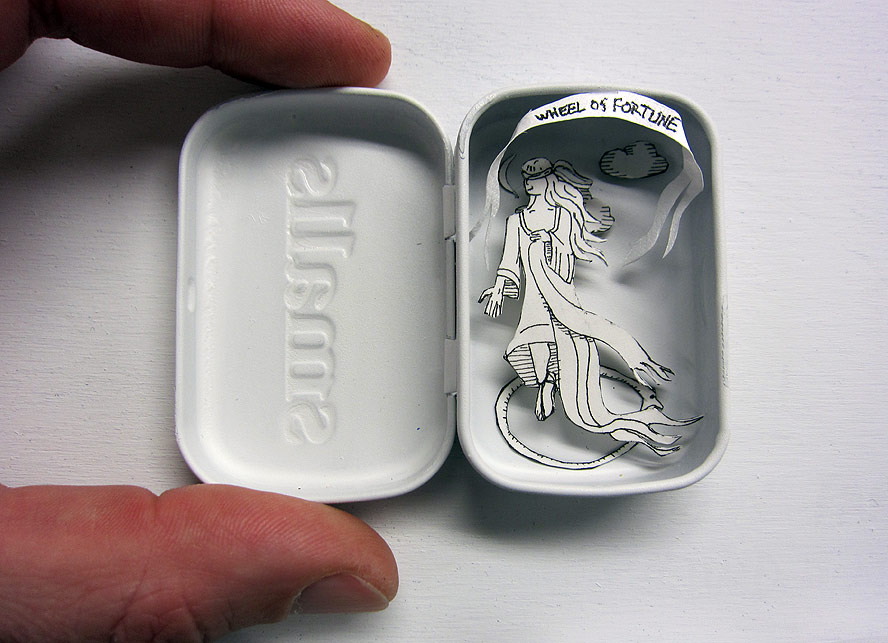 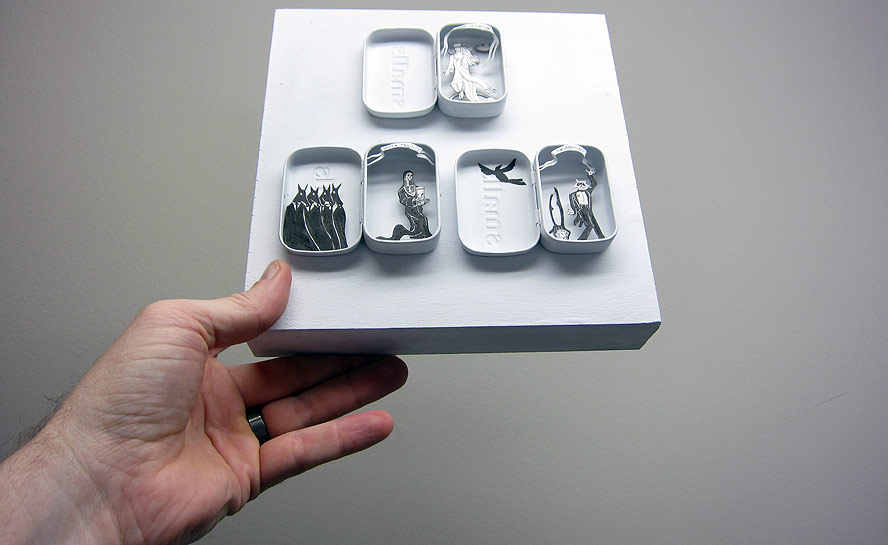 The Wheel of Life is part of a triptych called The Beauty of Life. I’m going to write about the other two panels in the next posts (and post two other commissions I’m finishing up).

I came up with three random scenes for  The Beauty of Life and drew them in my sketchbook. Then, I began researching each scene. I discovered that they aren’t really random at all. They are connected (and not just by squiggly pathways in my brain) though coincidental or synchronistic symbols (I’m not sure which and I’m very sleep deprived). I’ve been passively mulling over Tarot cards (mostly the Death card) and I spent a lot of time thinking about Magic last summer for the School33 show. When I added up the symbols I chose and looked up the cards, it was like a Tarot reading by itself.

The Wheel Of Fortune card, like other cards of the Major Arcana, varies widely in depiction between Tarot decks. Basically, this card has been modeled ever since the tarot’s inception in the 15th century after the medieval concept of Rota Fortunae, the wheel of the goddess Fortuna. Images generally show a six- or eight-spoked wheel, often attended or crested by an individual (sometimes human; sometimes a Sphinx-like half-human) attired in an Egyptian-style headdress. In some decks, such as the AG Müller, the wheel is also attended by an individual wearing a blindfold; and often there are people sitting or riding on the wheel whilst others are shown falling from it.

The wheel in my piece is an Ouroboros, rather than a traditional 6 or 8 spoke wheel. Again, from Wikipedia:

The Ouroboros or Uroborus is an ancient symbol depicting a serpent or dragon eating its own tail.

The Ouroboros often represents self-reflexivity or cyclicality, especially in the sense of something constantly re-creating itself, the eternal return, and other things perceived as cycles that begin anew as soon as they end (compare with phoenix). It can also represent the idea of primordial unity related to something existing in or persisting from the beginning with such force or qualities it cannot be extinguished. The Ouroboros has been important in religious and mythological symbolism, but has also been frequently used in alchemical illustrations, where it symbolizes the circular nature of the alchemist’s opus. It is also often associated with Gnosticism, and Hermeticism. Carl Jung interpreted the Ouroboros as having an archetypal significance to the human psyche. The Jungian psychologist Erich Neumann writes of it as a representation of the pre-ego “dawn state”, depicting the undifferentiated infancy experience of both mankind and the individual child. 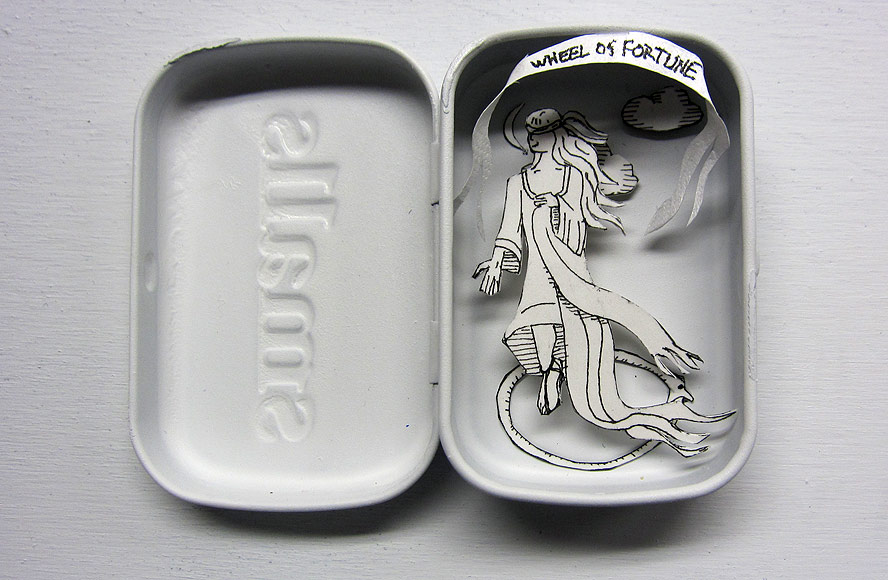 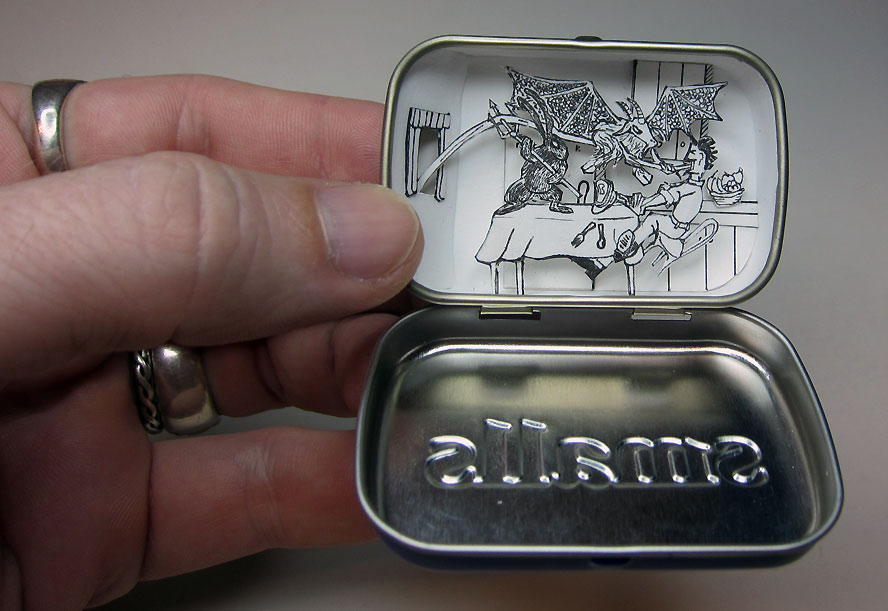 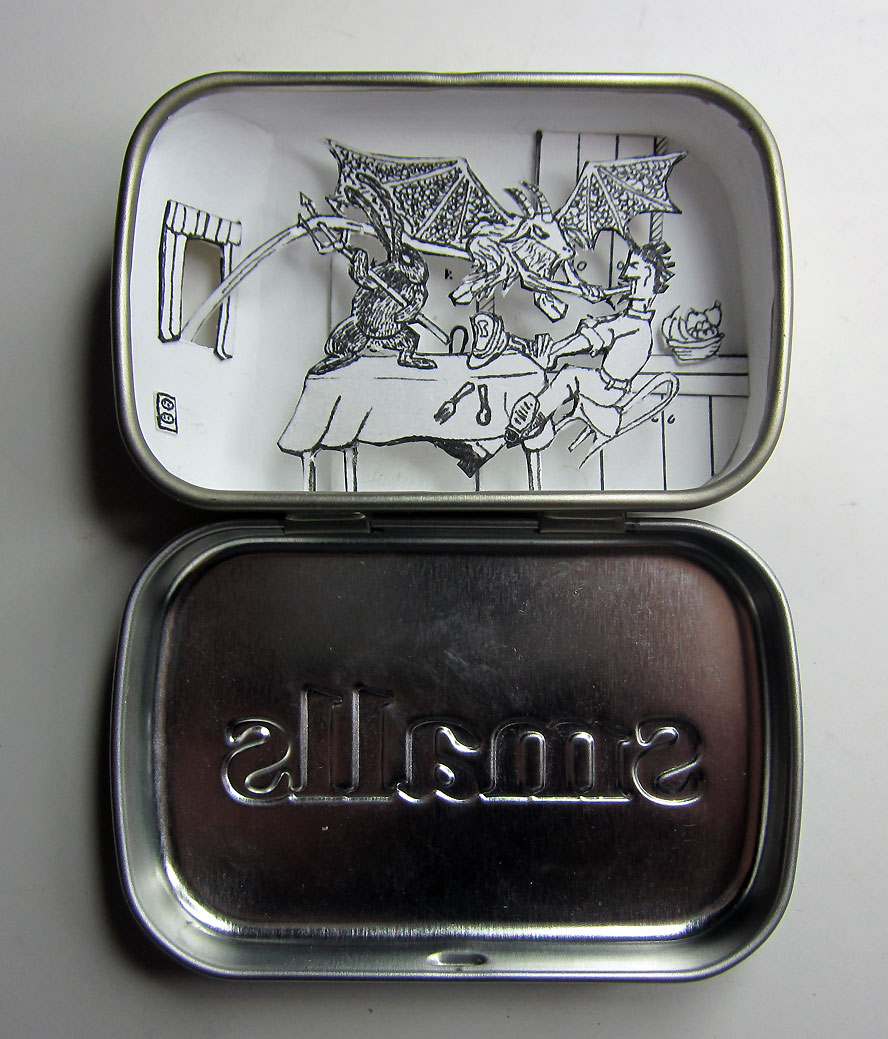 Dr. F was attacked in his kitchen, and this is how he lost his real name. The Rabbit and the Goat burst in took his name from him. His quest to find himself ensued.

This piece is a re-do of one of my early paper cut-out experiments. 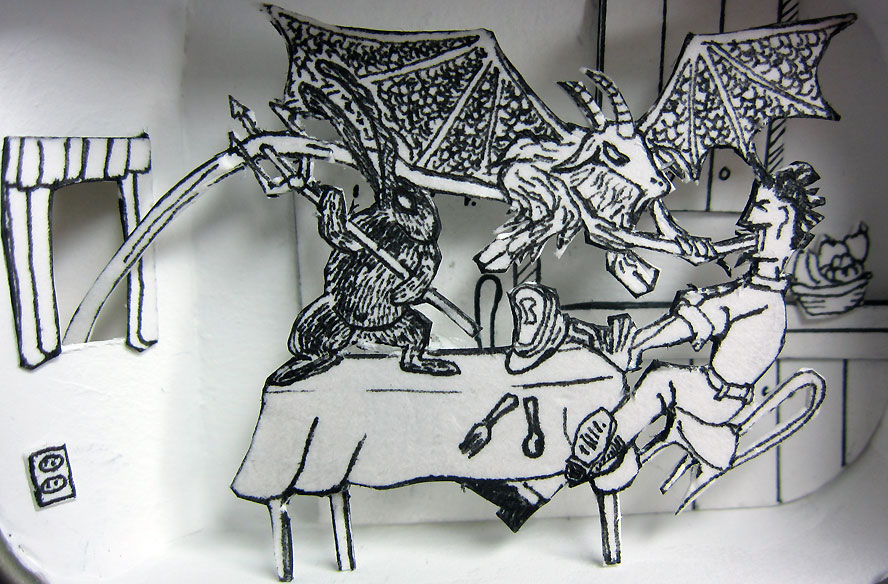