In May, I went to one of the Art After Hours evening events at the Baltimore Museum of Art. It was during the Surrealism Show. I attended the artist talk by Nathalie Djurberg and her partner, Hans Berg. Nathalie is a self-taught animator, and Hans is a composer specializing in non-vocal, psychedelic electronic music.

Nathalie talked a lot about the importance of process – process as being more important than the finished work. She doesn’t plan too far ahead, and just makes the work.

“The art itself is the making of it,” she explained. “It doesn’t matter if it is even considered art. Art is the one space in society that’s free. Freedom in the studio. Craft is not even as important as the act of making.” The rules can be, should be, ignored here. It is the Joy of Making. She also talked about how, when workin in her animated world as the creator, she is the Goddess of that world, and is both the protagonist and the villain(s). In this way, she is free to experience all sides in the story. She is, perhaps, free to be the things that one cannot be in daily life.

Djurberg explores obsession, fantasy, and desire in her films. Uncensored, yet couched in absurd/Surrealist visual storytelling, I was moved by her honesty and depth of vision. She’s found a way to openly explore very private things (secrets), using her own language. I think this is something most artists strive to do.

Here are three excerpts from the films that were showing at the black box at the BMA. They are rough, from my phone, and incomplete. I just want to share a little of their style and approach.

Here are a few things on YouTube, some in Swedish. Note: I hope these links are working as you read this – sometimes, permissions on the videos change, or they are removed from the Web host.

Art21.org has an excellent overview with these two, in English, that features lots of behind the scenes footage. Please take a look, it’s GREAT. 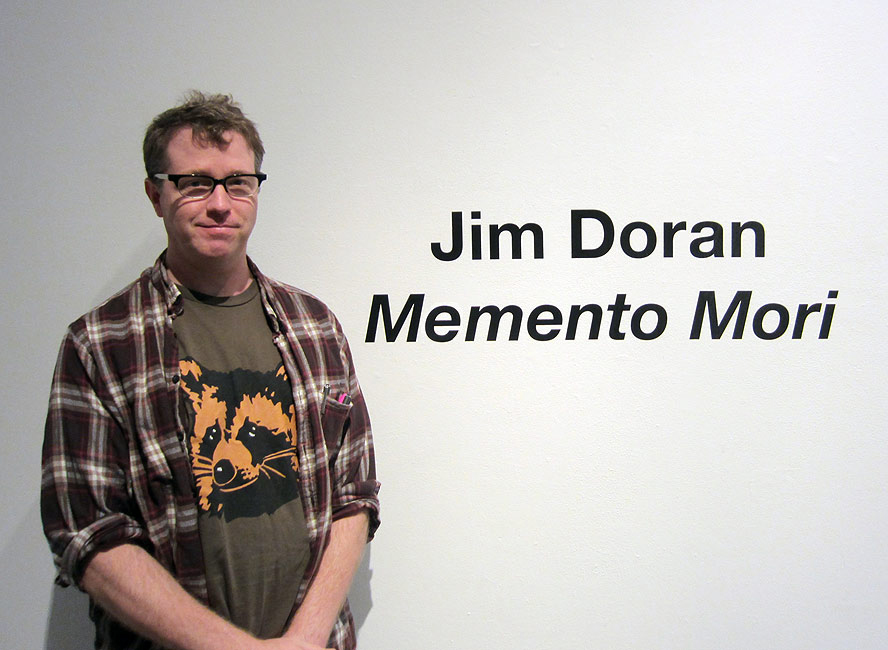 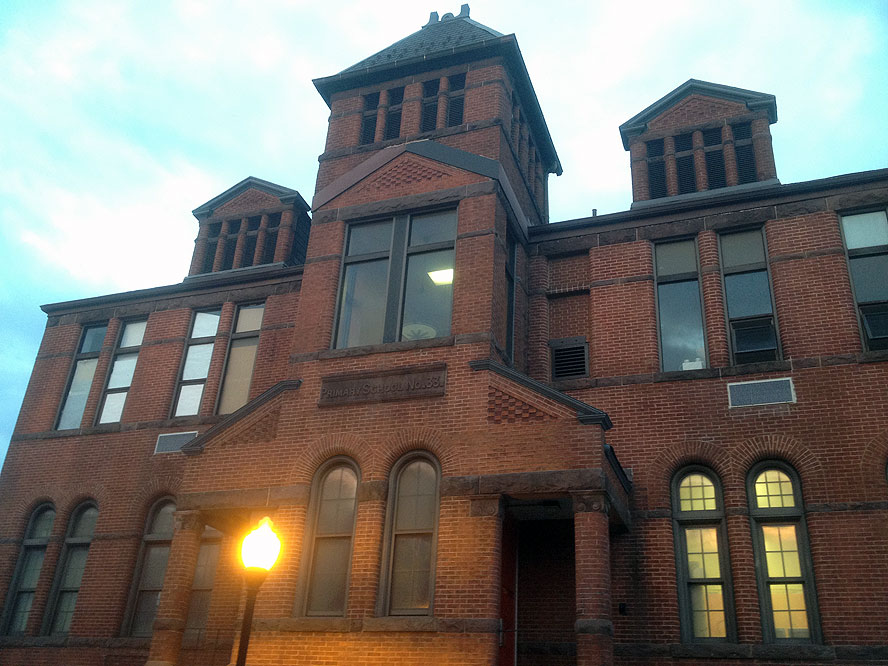 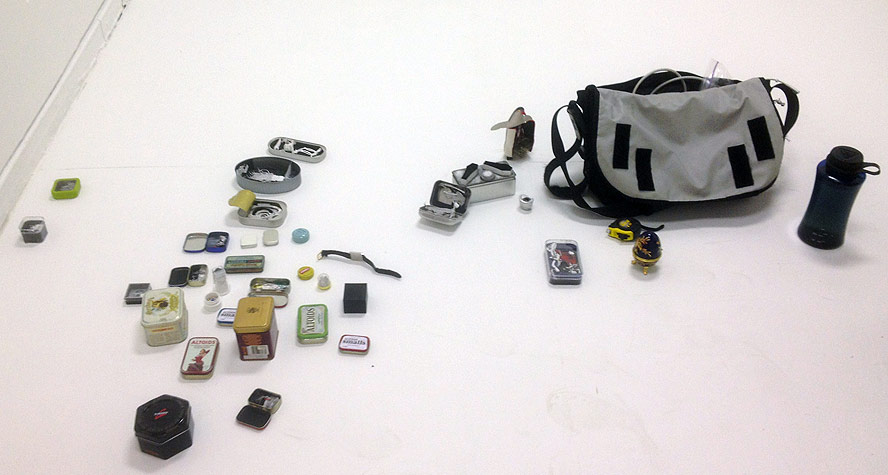 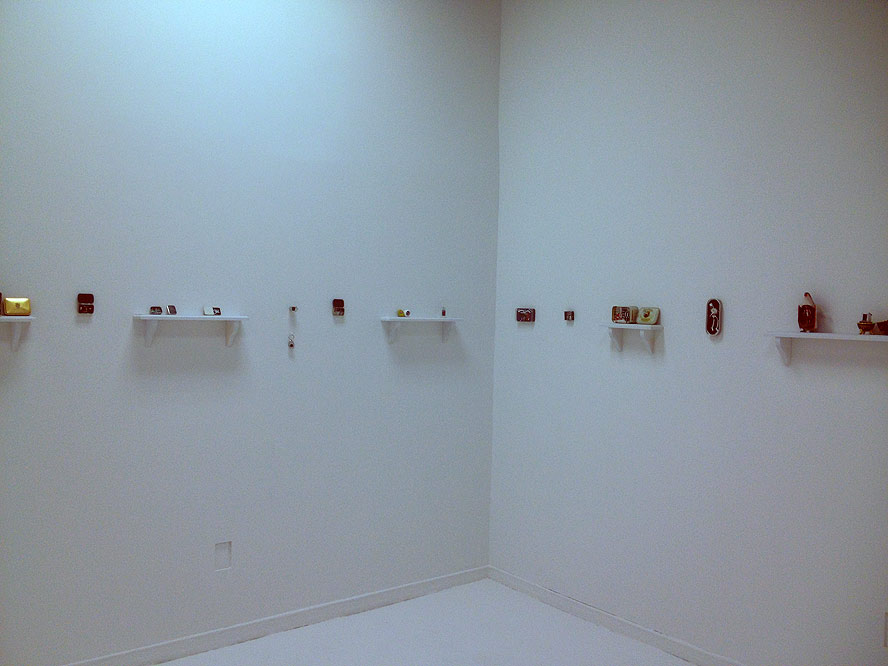 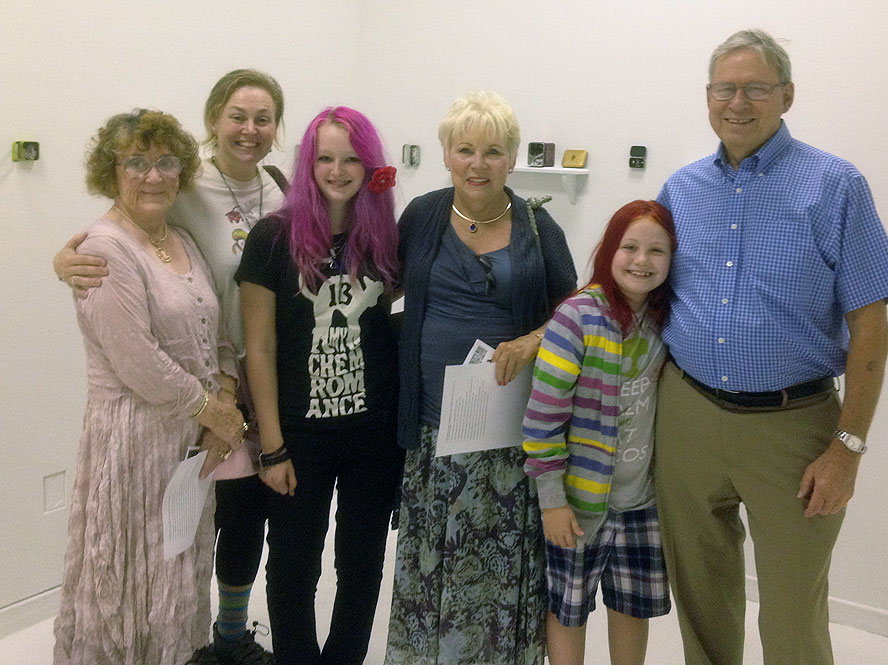 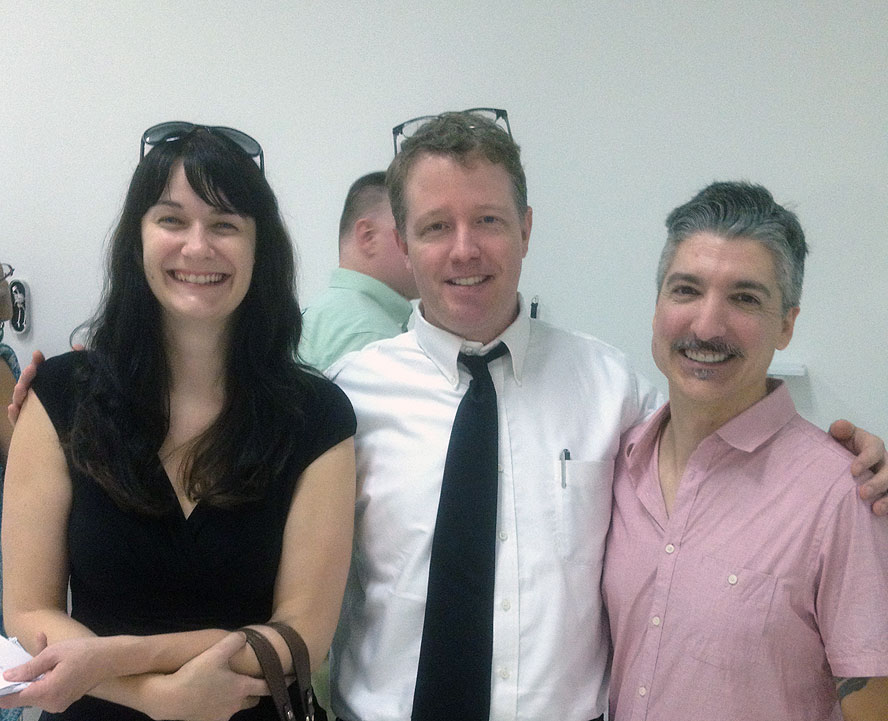 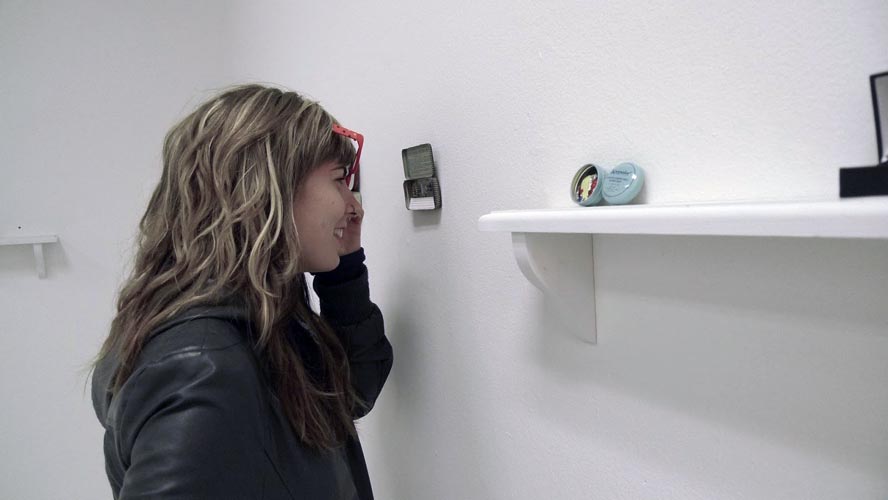 This post began as an abstract comic and developed into several paragraphs about blogs-n-sketchbooks plus an abstract comic. I’ve been posting a mishmash of stuff lately, much to the disappointment of my fellow water tower aficionados, and that got me thinking about writing about making.

I once attended a conference where a fellow talked about  open source software development.   He described a release cycle that including the work (designing, writing and debugging code) and releasing the code (for peer review/testing/acceptance). Don’t work in a vacuum – be a part of a community. Share your work incrementally. Don’t wait until the epic masterpiece is finished and perfect because, odds are, it will be neither. Put your stuff out there. Release, release, release. It’s how one grows.

This idea applies to a lot of things besides software. It applies to things like music, cooking, writing, teaching…art. It’s how we improve in our endeavors.

Last year, I started (and ended) a sketch blog. Its purpose was to support the mission of drawing every day. I thought it made sense to relegate the daily sketches to another site. I learned that not everything that ends up in a sketchbook needs to be (or should be) published. Not at all. And, that THIS blog is the place to release sketches.  It doesn’t matter that a lot of what I post here is quick and slack and unrefined. What matters is that work is being done (like in a sketchbook) and shared (the potential for peer review, chronicling of progress).

Sketchbooks are about thinking and ideas. They are diaries, laboratories, journals – they are messy, private, clumsy, joyous, random and sometimes enlightened places. They are worthless empty and priceless when filled. They are, in my mind, absolutely essential.

All people are creative. We design our lives. We make choices based on ideas, feelings, superstitions, various rationale – aesthetics.

Yet, is it essential to post one’s thoughts/sketches/art on the Web? Maybe. Many artists are discovered only after they pass on to the Land of the Dead, and I’m betting that some were happy in their obscurity. Everyone makes things for different reasons, but I suspect all humans receive the same rewards for their efforts.

Yet,  I bet a lot of those unknown artists would have LOVED to have been part of a scene/movement in their times. Because what is a scene/movement, really? A community. A very special one.  Not everyone is a visionary or catalyst for something “new,” but there are others who need to participate. A cook needs to feed people. And there was a lot more the the beatniks than bongos, man.

I began the Miracle of the Loaves and Fishes in October, knowing the deadline for the National Arts Program Exhibit was in early December.  I chose the title and started putting ideas down in a sketchbook.  I made a lot of sketches, did a lot of thinking and eventually settled on the idea of a triptych.  I’ve been experimenting with the old school nibs and India ink  which I loved as a kid. I find they are difficult to use, though, and tend to bleed big blobs of ink. 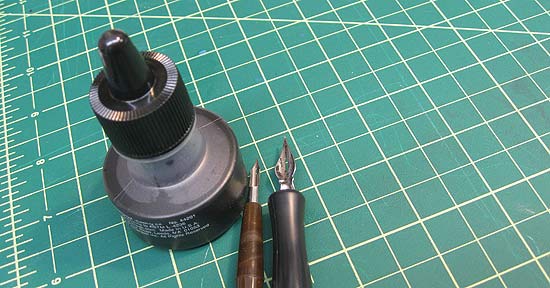 Still, little that’s worth doing is easy, and I continue to practice with them. They offer great possibility.

In October and November (especially over Thanksgiving break), I had a lot of  ideas, and the piece kept shifting focus. But when the actual day started to approach, my thinking solidified and I was “forced” to make decisions about the piece and execute them. I realize that without the deadline, I would have continued to develop ideas…forever.

This is the joy of process – getting lost in exploration and discovery and practice. I am a master of  JOP. To a fault, perhaps. 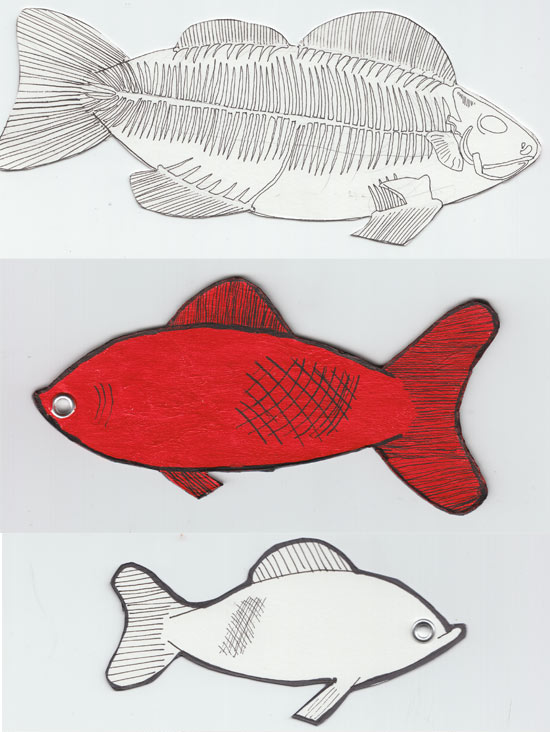 When I noticed the deadline approaching (it tried to sneak up on me, but thankfully I glanced up and saw it coming), I heard an audible “click” in my head. The pressure increased, decisions were made and the piece was assembled. Mr. JOP stepped aside and Mr. Assembly-line-worker took the plans got down to business.  This guy is the person who likes to make lists and accomplish things – a very good partner for Mr. JOP. 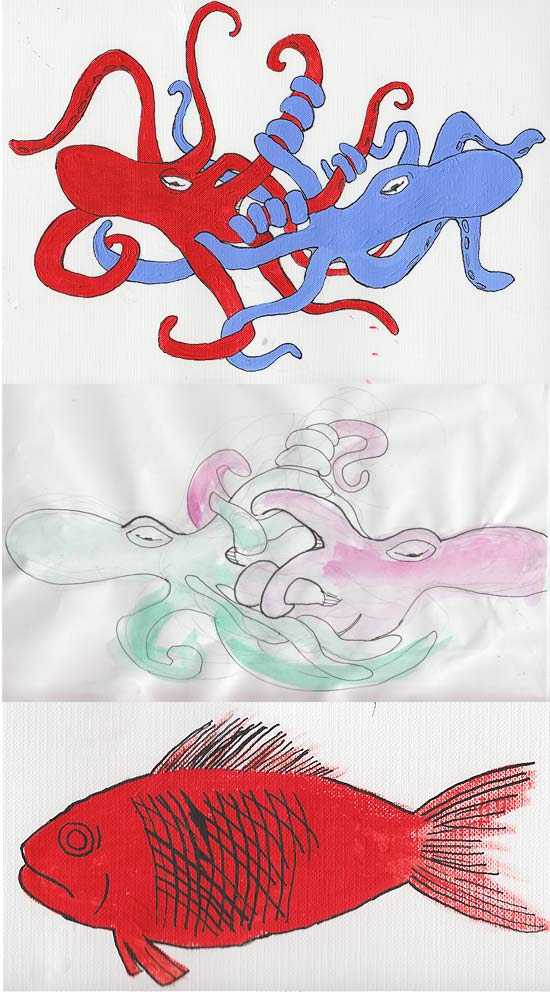 I used to do this with music – I’d write songs and record little  ideas and fill notebooks and tapes – I have gigs and gigs of this stuff – some of it is quite good, too. What was missing was a partner to work with, or a show to play or an album to finish.

Deadlines are good. Pressure is good. They add a dimension of purpose in what we do. They bring JOP together with Mr. Assembly-line-worker, the two halves of a whole. 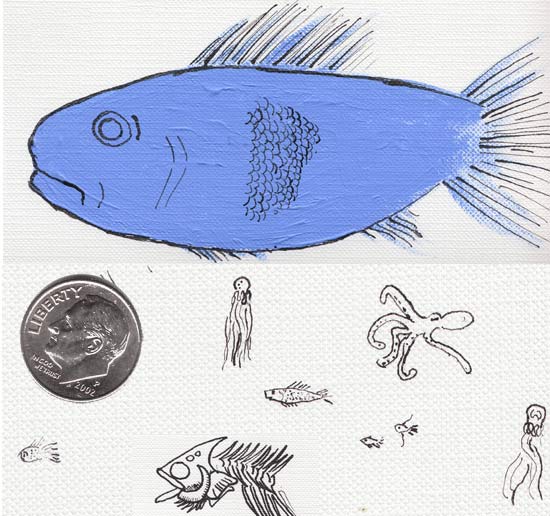 It’s very tempting to remain Mr. JOP. I think being him is more comfortable, and certainly more fun. He’s the mad scientist, loose on new frontier of possibility and wonder.  Do many other artists feel this way? I know a lot of my fellow developers do. And, I should add that these rough sketches in this post lead to other things – they all came from Mr. JOP’s efforts.

There are levels of deadline  pressure, too. A professional illustrator may be given guidelines, such as “Dead Fish Smoking a Pipe” or “Ruttabaggit” needed by next Tuesday. Open ended projects, on the other hand, may offer a little too much creative freedom, thus becoming a JOP trap. This can be especially daunting to non-professional creatives who are developing their own inspiration engines. Luckily, we live on a web with things like Illustration Friday, Spark and a bazillion other outlets to help us develop a JOP-creative output balance.

Alas, there’s work to do. Back to the drawing board.